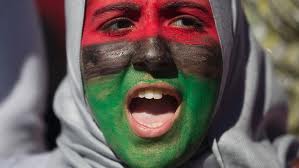 Two weeks after Egypt’s revolution, the firestorm of people’s uprisings that is transforming the Middle East continues, and yet the ruling elites are reasserting themselves, threatening to destroy everything the people have suffered and sacrificed for. Part of the mortal danger to the still-bright rebellions comes from these elites, part from the United States, and part from the class nature of the rebellions themselves. That is a bitter pill to swallow, but it is the truth.

For the last ten days as I write on Feb. 27, the struggle in Libya has taken center stage. An armed rebellion against Muammar al-Qaddafi that began in the anti-Qaddafi eastern city of Benghazi has taken over much of the country. Many of the ministers in Qaddafi’s government and many units in his army have gone over to the rebels. Qaddafi has held on in the western capital, Tripoli, by far the largest city in Libya, where his troops and armed thugs have murdered hundreds of unarmed demonstrators and are trying to counterattack against nearby cities. It’s too early to know how this life and death struggle will turn out.

Elsewhere the reform struggles have gained hard-won yet deceptive early gains. In Yemen two weeks of seesawing protests led to a pledge by President Ali Abdullah Saleh not to use force against peaceful demonstrators. And in Bahrain, after bloody attacks against earlier marches, intense pressure by the Obama administration led the government to withdraw its forces from the capital’s central areas, where an estimated 200,000 demonstrators—about a sixth of the whole population of this tiny kingdom—are now camped out. The movement in Bahrain is based mainly on the Shi’a majority, 70 percent of the population that is almost entirely excluded from good jobs and political life. It is demanding dissolution of the government, a non-sectarian state, and open elections.

In these countries brutal police and paramilitary crackdowns have crushed protests for the moment.

Finally, in Egypt, two weeks after Mubarak’s exit, the generals who pushed him out and whom the protest leaders mistakenly trusted are asserting control more openly. On Friday, Feb. 18, the first Friday since the changeover, more than a million people filled Cairo’s Tahrir Square in a rally largely controlled by the Muslim Brotherhood. Brotherhood leaders and a long-exiled Sunni religious leader, Sheik Yusuf al-Qaradawi, made very radical speeches calling for immediately lifting the preventive detention law, freeing political prisoners, and toppling the government of Ahmed Shafiq, the prime minister Mubarak appointed days before his overthrow. At the same time these speakers praised the ruling Supreme Council of the Armed Forces and failed to defend the workers’ strikes that are now a main hope of Egypt’s revolution. And security men kept several would-be speakers off the platform, reportedly including Wael Ghonim, the Google marketing executive who played a role in the uprising.

Four days later the April 6 Youth Movement, one of the earliest opposition forces, called for a new demonstration on Friday the 25th, demanding dismissal of Shafiq’s government, an end to the detention law, “abolition of the state security apparatus,” and “a new technocratic government,” but remaining silent on the strikes. Fairly obviously this was a move by those sidelined on Feb. 18 to assert their own influence. Stupidly, the call forewarned the authorities that the demonstrators would sit in at Tahrir Square “until the implementation of our demands.” The demonstration, large but much smaller than the earlier one, went off peacefully. But after midnight soldiers and security police cleared the square, tearing down tents and beating protesters. This round to the ruling generals.

The military dictatorship hasn’t yet dared move against the strike movements that have broken out among textile, pharmaceutical, and chemical workers, transit and ambulance workers, bank and airport employees,  electrical engineers, workers for the Suez Canal Authority, and others.  It has also become almost impossible to find up to date reports on these strikes in the news media, so it isn’t clear if some strikes have been settled, have fizzled, or have been suppressed. But there is growing danger of a military crackdown on the remaining strikes.

Egypt’s revolution is now in mortal danger from the army it left in command and which many activists mistakenly trusted, as well as from the opportunism of the Brotherhood which prevented others from speaking at the Feb. 18 rally and the shortsightedness and class prejudices of the middle-class leaders who believed they could negotiate with the generals and achieve democracy without the workers and poor.

It isn’t clear how these situations in several countries will develop. It is a bit clearer what is needed, but not whether there are activists who see what is needed and can organize for it.

·         Don’t Trust the Army. Egypt’s events show that the armies are never on the people’s side. To achieve real change it’s necessary to call the new regime what it is, a military dictatorship, and to work to win the common soldiers away from their officers, including building organizations inside the armed forces. Factory, neighborhood, and civic organizations have to press the common soldiers to refuse orders to attack demonstrators and strikers. In Libya, where large parts of the army are now fighting against Qaddafi, these army officers now look like heroes but can and will play the same treacherous role as Egypt’s generals in case of a victory. There too while working together against Qaddafi people have to try to win the loyalty of the common soldiers.

·         Don’t Trust the United States. In a “news analysis,” the New York Times writes: “Unlike neighboring Egypt and

Tunisia, Libya lacks the steadying hand of a military to buttress a collapsing government.” That’s exactly the attitude of the U.S. government to military rule. The U.S. has ties with the army in every dictatorship where the people are now organizing and rebelling. Most of the higher officers were trained in the U.S. American generals as well as the Defense Secretary, Robert Gates, were talking to Egypt’s generals all through the struggle against Mubarak. The armies are always the U.S.’s guarantee of continued control in case the dictators it backs should fall. More specifically, Obama and his representatives are working behind the scenes in Yemen, Bahrain, and Egypt to make sure that whatever change happens will be as limited and moderate as possible. Their goal is to make sure the popular movements die down and “stable”—moderately repressive—pro-U.S. regimes take power. Above all the U.S. has no intentions of supporting or allowing real changes in the economic systems, which would threaten its own interests.

·         Fight for Full Freedom. This means freedom for all political, social, religious, and workers’ organizations, free speech, and unrestricted access to the media. No censorship. Release all political prisoners. Open the files of the Interior Ministries and police and release all who were imprisoned unjustly. Compensate the victims or their survivors.

·         Ally with the Workers, Build for a General Strike. It is not too late in Egypt—and not too early elsewhere—to support the workers in their just demands. The workers, the unemployed, vendors and farmers want jobs or the opportunity to sell their services and crops, a steady income, decent housing, public sanitation and transportation, opportunities for their children to get further in the world—the bare minimum to bring hope in life. These demands mean the possibility of revolutions that don’t just bring limited democratic rights for the middle class, but social justice for all. Workers must move forward in the face of threatened repression! Widen the strike movement, take control of the workplaces and means of communication, build for a general strike. Spreading the strikes can both advance the workers’ cause and halt the generals’ attempt to consolidate control.

·         Organize Everywhere. Giant rallies in Tahrir Square or now in Bahrain’s capital can bring pressure on the authorities but they can’t go on for weeks or months and they can’t take the place of real, continuing civic associations, workplace councils, and neighborhood, town, and village assemblies.

·         Anarchists and Libertarian Socialists should organize, cooperate tactically, and take steps toward federating or unifying.

·         Elect a Constituent Assembly to Decide the Political System. This demand is necessary not only for Egypt—where the generals may or may not follow through on the very limited revisions in the Constitution they have mentioned—but for other countries as well. In Libya if Qaddafi is defeated the immediate transition regime will be composed of defectors from his government and army, plus some opposition leaders. What is needed is an assembly elected by the people in open, fair elections to decide the country’s form of government.

·         Form a National People’s Congress to implement these demands and resist the generals.

All these demands are possible. In Egypt the movement has lost a good deal of momentum to the generals. It is not too late to regain it, but time is short. In several other countries the movements are still on the upswing. The people have shown they can fight, bear witness, and when necessary die to overthrow unjust governments, and have shown they can win against them. Now the question is whether they can organize to win a just society.