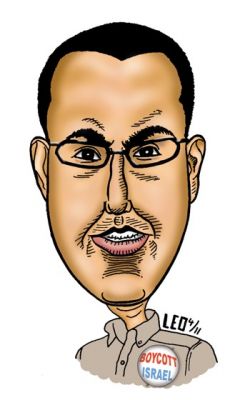 Modeled on the international campaign of economic and political pressure that helped bring an end to South African apartheid nearly two decades ago, the growing boycott, divestment and sanctions (BDS) movement targeting Israel’s occupation of Palestinian territories has notched notable victories of late.

Achievements include the announcement in April that the flagship London outlet of Ahava, an Israeli cosmetics company that reportedly manufactures its products in an illegal West Bank settlement, is losing its lease in response to years of protest. In February, legendary folk singer Pete Seeger joined a roster of artists honoring the boycott of Israel, including Elvis Costello, Dustin Hoffman, Gil Scott-Heron, Johnny Depp and the Pixies.

Defenders of Israel dismiss these victories as minor irritants, but the government has reacted with alarm. In February the Knesset gave initial approval to a bill criminalizing advocacy of BDS. Israeli commentators, including the influential Tel Aviv-based Reut Institute, have called the BDS movement a “strategic threat” to the state of Israel. And the United States, Israel’s patron, has joined the chorus of critics. “When academics from Israel are boycotted — this is not objecting to a policy — this is anti-Semitism,” Hannah Rosenthal, the State Department’s envoy on combating anti-Semitism, said in an April 2 speech.

Rosenthal’s statement came right after the U.S. Consulate in Jerusalem approved a long-delayed visa for Omar Barghouti, a leading figure in the BDS movement. Author of the new book, Boycott, Divestment and Sanctions: The Global Struggle for Palestinian Rights, Barghouti was forced to postpone a tour of U.S. college campuses after his visa was held up for four months. In response an international campaign bombarded the consulate with phone calls
and emails.

The attempt at scuttling Barghouti’s tour comes as no surprise in the context of increased U.S. and Israeli government scrutiny of the BDS movement’s growing popularity. Barghouti is a founding member of the Palestinian Campaign for the Academic and Cultural Boycott of Israel, and award-winning journalist Max Blumenthal refers to Barghouti as “one of the BDS movement’s most effective strategists and promoters.”

I met up with Barghouti after his publisher, Haymarket Books, rescheduled his tour for April. Sitting in a crowded coffee shop in Manhattan, Barghouti talked about building on his experience as an anti-apartheid campaigner by focusing his attention on U.S. college campuses. “When I was in the anti-apartheid movement, we knew that we won when Columbia, Stanford, Berkeley, Harvard, Princeton divested. That was the beginning of the end for the apartheid system in South Africa.”

Barghouti describes his book as “about a movement that’s still growing very rapidly, in fact, and changing and transforming and gaining many more supporters. [The book is] taking stock of the main intellectual basis for the movement, the main achievements, the main challenges and where we go forward from here.”

The movement has three demands: an end to Israel’s occupation of Palestinian lands and the dismantling of the separation barrier, equality for Palestinian citizens of Israel and the right of return for Palestinian refugees. To meet these goals, the BDS movement advocates boycotting Israeli products and institutions, divesting from companies profiting from the occupation and government sanctions on Israel.

It’s clear from the responses of powerful governments that the BDS movement is chipping away at key bastions of support for Israel in the West — exactly the movement’s goal, says Barghouti. “I think we’ve already won the battle for hearts and minds in many places in the West, especially in Western Europe. … Recent polls show Europeans view Israel, together with North Korea, Iran and Pakistan, as the most important threats to world peace. So, Israel is down there in that league, and the BDS movement has played a key role.”

But in the United States the stakes are even higher. Barghouti says, “It’s too early to mention a real, substantial shift in the [mainstream] discourse in the U.S. on the Palestinian-Israeli colonial conflict,” but at the grassroots level and on college campuses there is “a sea change in terms of the discourse.”

For example, New York University’s Students for Justice in Palestine just kicked off a divestment campaign on their campus, and students at the University of Arizona have recently launched a similar effort.

The BDS movement in the United States is up against powerful forces. At the urging of the Israeli government, organizations such as the Jewish Federations of North America and the Jewish Council for Public Affairs have pledged to spend $6 million in the next three years to combat BDS initiatives. Nonetheless, left-wing Jewish groups such as the Zionist group Meretz USA have begun to embrace the logic of boycott. A prime example is Jewish Voice for Peace, which is currently leading a campaign to pressure the TIAA-CREF retirement fund to drop holdings from companies that profit from the occupation.

“Many Jewish groups who were previously sitting on the fence before the Israeli massacre in Gaza took sides in support of Palestinian rights after Gaza. Increasingly, they’re moving in the direction of BDS,” says Barghouti.

Some activists have argued that the BDS movement may now also benefit from the Arab uprisings, which have captivated and inspired many Americans, as seen by the union protests in Wisconsin.

“Most of the Arab uprisings give credit to the Palestinian intifada, the first intifada, as the main inspiration for their revolutions. In turn, we are very inspired by the peoples’ revolutions, especially in Tunisia and Egypt. Most importantly, there’s been a drastic, irreversible transformation in the balance of powers after the Egyptian revolution,” Barghouti says.