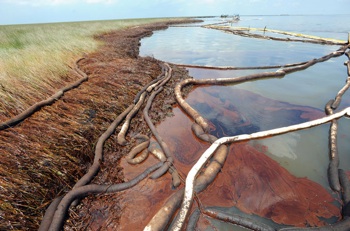 The owner of a charter fishing business, he had always supported the oil industry in his home state of Louisiana.

He previously trusted BP, and the rest of the oil industry, to do the right thing in case an accident happened. But not any more. “I’m seeing people starving to death and BP won’t pay them,” said Lambert.

His business drop of 94 per cent in the last year has cost him more than $1.1mn, he told Al Jazeera, “They won’t pay me, they owe me well over a million dollars just for last year, and all they do is send more papers to fill out.”

In the aftermath of BP’s disaster that began on April 20 of last year, the oil giant promised those whose livelihoods had been damaged that they would be made “whole” and fully compensated for their losses.

“I want the entire country to know, you cannot trust what BP or [what] the oil industry promises you. I’m most definitely taking up litigation against BP,” he added.

Lambert is not alone.

The Centre for Biological Diversity (CBD) is a group that uses the law to protect the lands, waters, and climate that species need to survive. CBD has an unparallelled record of legal successes, with 93 per cent of their lawsuits having resulted in favourable outcomes. And, now they are suing BP for $19bn.

“We have sued them under the Clean Water Act,” Kieran Suckling, the executive director and founder of the CBD told Al Jazeera. “The way the Act works is it levies a fine based on the number of gallons [of oil] spilled and how malicious or criminal BP was acting when the spill occurred. So a big part of the suit is about determining how many barrels were spilled, and BP’s level of negligence.”

Suckling explained that, depending on BP’s level of negligence, the fine they face per barrel of oil released into the Gulf of Mexico, “could range from $1,300 to $4,300 per barrel if they are found criminally negligent.”

CBD believes BP released 5.5 million barrels of oil, and is awaiting the official estimate from the federal government, which has not been released yet.

“BP will try to low ball the amount,” Suckling added. “They are currently trying to argue that rather than being charged per barrel, they want to be charged per day of the spill, and they’ve come up with a ridiculously low number for that. If they have their way, their fine will be in the millions rather than the billions.”

So far, CBD has filed eight lawsuits and six notices of intent to sue to make sure BP and the federal government are held accountable. The fact that it’s the largest environmental disaster in US history strengthens their case further.

“The big issue will be what position the feds take, since we filed this suit because we do not trust the Obama administration to hold BP’s feet to the fire,” Suckling said, “so ultimately we will be fighting both of them.” 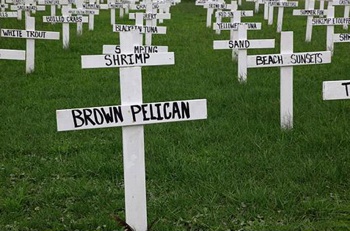 Blown out of the water

Cyn Sarthough is the executive director of the Gulf Restoration Network (GRN), an environmental group active in all of the states that have a coastline on the Gulf of Mexico. GRN, like CBD, sues companies and government organisations that violate environmental laws, and has had much success in doing so over the years.

“Much of our litigation is against the Bureau of Ocean Energy Management Regulation and Enforcement (BOEMRE), the group that was formerly the Minerals Management Service (MMS),” Sarthough told Al Jazeera. “There is also a challenge to BP’s original oil spill response plan. We are engaged in this with several other claimants because what they had in place was inappropriate and failed to meet safety requirements because it grossly exaggerated BP’s response capabilities.”

This month the CBD released a report titled, A deadly toll: The Gulf Oil Spill and the unfolding wildlife disaster.

CBD estimates,”Approximately 6,000 sea turtles, 26,000 dolphins and whales, 82,000 birds, and countless fish and invertebrates may have been harmed by the disaster.”

One of GRN’s lawsuits involves what Sarthough says is the failure of federal agencies, like the National Oceanic and Atmospheric Administration, as well as BP, to comply with the Endangered Species Act.

This means that any harassment, injury, or death of an endangered species is in violation of the law.

“We believe there should be compensation for this paid by BP, in fines,” Sarthough said, “and this money is then put into restoration of the species that were impacted.”

Sarthough says that the now defunct MMS had found impact statements that showed there was no specific danger to species by work being done by the oil and gas industry in the Gulf.

“They claimed there was no real risk of any significant action that would harm endangered species,” she said, “we believe this needs to be redone because it is based on an assumption that no longer holds true. The BP disaster has blown that assumption of theirs out of the water. There needs to be a focus on the species that were impacted. That’s what we want.”

Prior to this, CBD, GRN, the Natural Resources Defence Council, and the Sierra Club filed a formal notice of intent to sue Salazar for ignoring marine-mammal protection laws when approving offshore oil and gas activities in the Gulf.

CBD has already filed suit against Salazar for concluding that oil drilling poses no possible risk of significant environmental effects. Furthermore, for failing to assess possible impacts on the Gulf of Mexico’s endangered whales and sea turtles, his continued approval of offshore drilling plans in the Gulf without environmental review, and for his withholding emails, phone logs, and meeting notes documenting his interactions with oil-industry lobbyists since he became secretary of the interior.

About the suit CBD is preparing to file against Salazar for ignoring marine mammal protection laws when approving offshore oil and gas activities in the gulf, Suckling is blunt:

As for BP, Suckling feels the oil giant, “should be made to pay $19bn under the Clean Water Act and in so doing be found to be criminally negligent. That $19bn should be entirely new funds, not including anything they’ve already put out, and those funds should be dedicated to Gulf Coast restoration.”

Suckling, from the Centre for Biological Diversity also believes BP should be held liable for the killing of birds under the Migratory Bird Treaty Act, which brings separate fines, as well as BP being held liable for the widespread economic damage their disaster has wrought the Gulf Coast.

“And BP should be found liable for the deaths of the 11 workers on the Deepwater Horizon, and that should go as high as Tony Hayward, as far as who should be held criminally liable.”

In the wake of the disaster and after a series of public gaffes that led to his ceding the CEO post to Bob Dudley, former BP CEO Tony Hayward grabbed headlines with a $17.9mn pension, $1.6mn payoff and $13mn in share options. 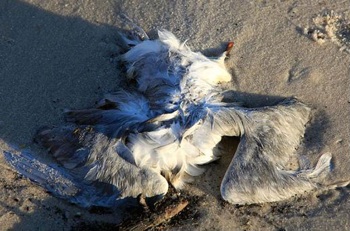 The Gulf Coast-based law firm Brent Coon and Associates (BCA) is considered one of the world’s foremost experts on BP, and has successfully sued the oil giant in the past.

Brent Coon was the lead attorney in a case against BP for a 2005 explosion at their refinery in Texas that killed 15 workers. His firm forced BP to accept full responsibility and compensate the victims and their families.

BCA now represents more than 5,000 claimants from BP’s Gulf of Mexico disaster, and has been appointed by the Plaintiff’s Steering Committee to head several key sub-committees relating to discovery.

“We represent a cross section of claimants, who range from people who worked within the oil industry, to shrimpers, captains, deck hands, restaurant and condominium owners,” Coon told Al Jazeera. “We want full restitution and reparations for harm done by BP.”

Coon said that in addition to BP, other companies that were involved in the disaster, like Halliburton and Transocean, need to be held accountable as well.

“From what I’ve seen, after representing thousands of people who were made sick or died from petrochemical industry hazards over the years, companies like BP, Exxon, Citgo, Shell, and others do not mind killing people as the cost of doing business,” Coon added, “even when it’s their own employees. I’ve seen it time and time again.”

“Unless you criminally prosecute these people and make them pay for their decisions, they do not have a sufficient deterrent for the way they do business,” he continued, “unless the government steps in and criminally prosecutes these bastards and hold them accountable, nothing is going to change.”

Coon, and the claimants his firm represents intend to do just that.

Lambert, the charter fisherman, plans on fighting BP to the end.

“Mr Feinberg recently told Dan Rather that the people in the Gulf who talk the loudest have the most dubious compensation claims,” Lambert said.”I challenge him to see if I have a dubious claim. I’ll be the one yelling from the rooftops.”

This article was originally published on AlJazeera.net.