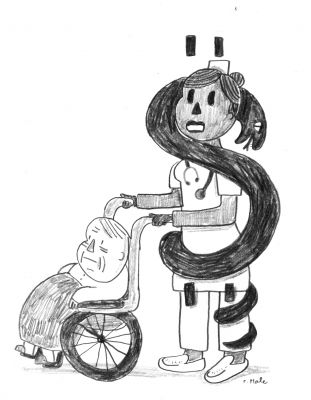 Wisconsin Gov. Scott Walker is not alone in bashing public workers these days. In the view of Indiana Gov. Mitch Daniels, a potential 2012 GOP presidential candidate, collective bargaining has transformed civil servants into “a new privileged class.” For many newly elected Republican governors and legislators, the solution to the budget problems of state and local government is to strip public employees of negotiating rights while cutting their existing pay and benefits.

Teachers, social workers, public safety officers and many other white-collar and blue-collar employees are the main target of this multi-state assault. Decades of union bargaining in a majority of states has provided millions of public sector workers with the kind of job-based health insurance and retirement coverage that all Americans should enjoy, but that most don’t.

Meanwhile, there’s another group of public employees — only recently arrived at the bargaining table — who are not “privileged” by any standard. These are the hundreds of thousands of direct-care providers who work with children, the aged or disabled in their own or other families’ homes. These caregivers are mainly low-income, non-white, female and, in some states, foreign born. Their contingent labor is largely invisible as well as undervalued. Even with union representation, these jobs pay little more than the minimum wage and lack significant benefits.

ACTIONS GET RESULTS
Since 1999, action and organizing by the Service Employees International Union (SEIU) and four other unions enabled 600,000 home-based workers to win collective bargaining rights. Previously, home healthcare aides and childcare providers were classified as “independent contractors” and had no organizational voice in “non-traditional” workplaces. In return for union recognition and initial contracts obtained from union-friendly Democratic lawmakers, SEIU, the American Federation of State, County and Municipal Employees (AFSCME), the American Federation of Teachers (AFT), the Communications Workers of America (CWA) and the United Auto Workers (UAW) all agreed that their new home-based worker bargaining units would not be covered by existing state worker pension or medical plans.

Now the budget ax is falling on these workers. Since January, more than 50,000 home-based workers have lost much-needed union protection. Many more will lose their jobs in these states and in others run by Democrats, due to public spending cuts in home-based childcare and health services. University of California professor Eileen Boris characterizes these programs as “the poor caring for the poor.” When funding is reduced and direct-care jobs are eliminated, low-income Americans suffer as both workers and clients.

In Michigan, 40,000 childcare workers represented by the UAW and AFSCME won bargaining rights in December 2006 through an executive order. On March 1, however, Republican Gov. Rick Snyder cut pay by 25 percent and terminated union dues collection for more than 16,000 of these workers. In Ohio, GOP Gov. John Kasich similarly rescinded contract coverage for 14,000 recently unionized childcare and home care workers. Another group of 4,000 home healthcare aides in Wisconsin failed to win legislative approval of the $9 per hour minimum wage they negotiated last year. Now, as part of Gov. Scott Walker’s repeal of public-sector bargaining in the state, he has abolished the Quality Home Care Authority created in 2009 to facilitate unionization of these personal care attendants.

This trend is not limited to Republicans. While not threatening collective bargaining rights, new Democratic governors are squeezing benefits that affect unionized caregivers. In New York State, Gov. Andrew Cuomo’s budget slashes more than $2 billion from education and healthcare spending. New York City-based 1199 SEIU, which represents 70,000 home care workers, is optimistic that its members will be protected. “Delivering state savings without disruption to Medicaid beneficiaries and their caregivers is an enormous feat,” union president George Gresham told The New York Times in late February.

As 1199 pointed out in a statement last Fall, “state Medicaid funding to the home health services sector has been cut 9 separate times in just the last three years.” As many as half of the union’s home care members, who often make less than $15,000 a year, have lost their coverage under the 1199 healthcare trust. In addition, to protect the medical benefits of working members who still qualify, thousands of dependent children have been dropped from the plan because of a reported shortfall between what employers contributed to the fund and the higher premiums now being charged by its insurance provider. (Most of the children affected are eligible for alternative coverage through New York State’s Children Health Plus program.)

Spending reductions announced in March by California Gov. Jerry Brown included nearly $3 billion worth of cuts in Medicaid and welfare-to-work programs. Several hundred thousand unionized caregivers employed in California’s county-administered but state-funded In-Home Supportive Services program will soon bear the brunt of this budget crunch. In 10 other states where home care unionism is a much newer phenomena with far less political clout behind it, a massive reduction in jobs, hours and compensation will be even harder to fend off.

FRAGILE FOOTHOLD
When CWA first gained a fragile foothold in this sector six years ago, the union partnered with both AFSCME and the now defunct ACORN. In New Jersey, where CWA is the largest public employee union, organizers knocked on childcare providers’ doors using lists provided by the state and leads obtained from the Newark, Trenton and Camden chapters of ACORN. CWA and AFSCME collected enough union authorization cards to win recognition for a new Child Care Workers Union (CCWU) via an executive order signed by Gov. Jon Corzine in August 2006. In a related CWA organizing drive, Corzine granted bargaining rights to 1,000 State Division of Developmental Disabilities employees who provide respite care and other home-based services to the disabled and their families.

Prior to this, the 6,000 childcare workers involved averaged about $17,000 a year, with few benefits and often only part-time work. Most of these positions are funded through the Temporary Assistance for Needy Families (TANF) Program, otherwise known as “workfare.” Participants in TANF take care of their own children or the children of other recipients who are employed in low-wage jobs outside their own homes. The initial CCWU agreement with the state increased annual per-child payments to providers; a worker caring for five children could earn $7,200 more annually by the end of the four-year contract.

The CCWU contract also obligated the state to provide parents with seniority lists so they would know who was an experienced day care provider and who was new to the job. A grievance procedure was created, which included arbitration of unresolved disputes about contract violations. Compared to the benefit-studded agreement covering regular state workers — now under attack by Corzine’s Republican successor, Gov. Chris Christie — the CCWU agreement was bare bones. It didn’t improve healthcare, deferring the issue to a follow-up study and subsequent negotiations that won’t be easy in the current bargaining climate.

CWA and AFSCME did manage to scratch out a victory by getting legislative approval for the union recognition deals during a lame duck session in Trenton before Christie’s inauguration in January 2010.

MEETING THE CHALLENGE
As Eileen Boris and Jennifer Klein argue in their forthcoming book, Caring for America, the national recession, state budget crises and right-wing ascendancy in some state capitals has exposed “an “Achilles heel of the organizing model established by SEIU and copied by other unions.” Boris and Klein have long expressed concern about whether “empowering care workers” was really part of the union agenda. While supportive of the economic gains made for home healthcare aides in New York, Illinois and California — where Democrats still control the governor’s office — the authors warned about the weakness of “bureaucratic unionism that reinforces the old racialized gender distinctions of care work and stymies the advancement of rank-and-file women.”

Building real organization among home-based workers isolated from co-workers and lacking traditional union structures (like a shop steward network) is even more necessary. As Boris and Klein note, political deals made at the top have become vulnerable in a sector where the work was “already insecure and unstable, with constant turnover.” Home-based worker unionism will only survive, they argue, if there is “a social depth and culture to the union that enables it to live on [either] when workers move in and out, or the political deals fall apart.”

The dramatic and unusual display of grassroots activism in Wisconsin recently has shown the potential for a different kind of public sector unionism. In long established bargaining units of teachers, state workers and municipal employees, rank-and-file activists have broken with business as usual, in both their lobbying techniques and their direct action on the job (like public school teachers doing mass sick-outs). For hundreds of thousands of low-wage direct-care providers, the fight to defend modest contract gains or recently acquitted bargaining rights is an important, if little noticed, part of the ongoing struggle in Madison and other state capitals.

It’s not just a fight for what unions invariably, and misleadingly, call “the middle class.” The working poor who care for other poor people — and many of us in other classes — haven’t made it that far up the ladder yet. Their paltry pay, lack of social recognition and benefit coverage and limited training and opportunities for promotion all belie the importance of the work they do every day. Organized labor would do well to put their plight front and center because there are no public-sector “fat cats,” real or imagined, anywhere to be found in the fields of home care and childcare.

Steve Early is labor journalist and lawyer who worked as a union organizer for Communications Workers of America District 1. He is the author most recently of The Civil Wars in U.S. Labor, civilwarsinlabor.org, and can be reached at lsupport@aol.com.