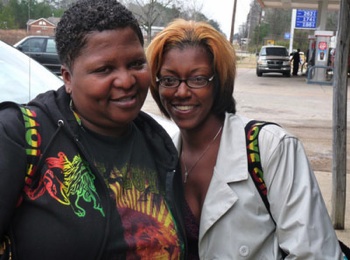 Civil rights activist Catrina Wallace, who received national acclaim for her central role in organizing protests around the Jena Six case, was convicted today of three counts of distribution of a controlled substance.  She was taken from the courtroom straight to jail after the verdict was read, and given a one million dollar bail.  Her sentencing is expected to come next month.

Wallace, who is 30, became an activist after her teenage brother, Robert Bailey, was arrested and charged with attempted murder after a fight in Jena High School.  Bailey and five others later became known as the Jena Six, and their cause became a civil rights rallying cry that was called the first struggle of a 21st-century Civil Rights Movement.  Their case eventually brought 50,000 people on a march through the town of Jena, and as a result of the public pressure the young men were eventually freed.  The six are all now in college or — in the case of the youngest — on their way.  Wallace and her mother, Caseptla Bailey, stayed in Jena and founded Organizing in the Trenches, a community organization dedicated to working with youth.

Catrina Wallace was represented by Krystal Todd of the Lasalle Parish Public Defenders Office.  The case was prosecuted by Lasalle Parish District Attorney Reed Walters, who also prosecuted the Jena Six case, and famously told a room full of students: “I can make your lives disappear with a stroke of my pen.”  The case was presided over by 28th District Judge J. Christopher Peters, a former Assistant District Attorney under Reed Walters.  Peters is the son of Judge Jimmie C. Peters, who held the same seat until 1994.  The 12-person jury had one Black member.

Wallace was arrested as part of “Operation Third Option,” which saw more than 150 officers, including a SWAT team and helicopters, storm into Jena’s Black community on July 9, 2009.  Although no drugs were seized, a dozen people were arrested, based on testimony and video evidence provided by a police informant, 23-year-old convicted drug dealer Evan Brown.  So far, most of those arrested on that day have pled guilty and faced long sentences.  Devin Lofton, who pled guilty to conspiracy to distribute, received ten years.  Adrian Richardson, 34, who pled guilty to two counts of distribution, received twenty-five years.  Termaine Lee, a twenty-two-year-old who had no previous record but faced six counts of distribution, received twenty years.

In response to the verdict, community members responded with sadness and outrage.  “We don’t have any help here,” said Marcus Jones, the father of Mychal Bell, another of the Jena Six youths.  “Catrina tried to keep in high spirits leading up to the trial, but when a bomb like this is dropped on you, what can you do?”  Jones and others are calling for the US Department of Justice to investigate.

Wallace, a single mother, has three small children, aged 3, 5, and 10.  The youngest child has frequent seizures.

This article was originally published on MRZine.org.