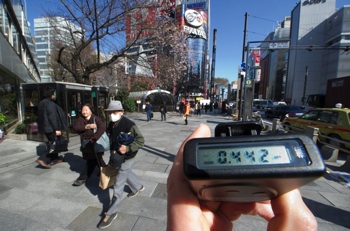 In a nuclear crisis that is becoming more and more serious all the time, Japan’s Nuclear Safety Agency confirmed that radioactive iodine-131 in seawater samples taken near the crippled Fukushima-Daiichi nuclear power complex–which was seriously damaged by the tsunami caused by an earthquake off the coast of Japan–is 4,385 times the level permitted by law.

Airborne radiation near the plant has been measured at four times government limits.

Tokyo Electric Power Company, the company that operates the crippled plant, has begun releasing more than 11,000 tons of radioactive water that was used to cool the fuel rods into the ocean while it attempts to find the source of radioactive leaks. The water being released is about 100 times more radioactive than legal limits.

Meanwhile, water that is vastly more radioactive continued to gush into the ocean at the beginning of the month–through a large crack in a six-foot deep pit at the nuclear plant. Workers used sawdust, shredded newspaper and diaper chemicals in a desperate attempt to plug the area, which failed. Water leaking from the pit was about 10,000 times more radioactive than water normally found at a nuclear plant. The leak into the ocean was reportedly plugged on April 5, but not before a large amount of contaminated water was released.

Radiation from a meltdown in the core of reactor No. 2 is leaking out into the water and soil, with other reactors continuing to experience problems. Yet scientists and activists question even the government and nuclear industry “safe” limits of radiation exposure.

“The U.S. Department of Energy has testified that there is no level of radiation that is so low that it is without health risks,” Jacqueline Cabasso, executive director of the Western States Legal Foundation, told Al Jazeera.

Her foundation monitors and analyzes U.S. nuclear weapons programs and policies and related high technology energy, with a focus on the national nuclear weapons laboratories. Cabasso explained that natural background radiation exists, “but more than 2,000 nuclear tests have enhanced this background radiation level, so we are already living in an artificially radiated environment due to all the nuclear tests.”

“Karl Morgan, who worked on the Manhattan project, later came out against the nuclear industry when he understood the danger of low levels of ionizing radiation–and he said there is no safe dose of radiation exposure,” Cabasso continued, “That means all this talk about what a worker or the public can withstand on a yearly basis is bogus. There is no safe level of radiation exposure. These so-called safe levels are coming from within the nuclear establishment.”

Karl Morgan was an American physicist who was a founder of the field of radiation health physics. After a long career in the Manhattan Project and at the Oak Ridge National Laboratory, he became a critic of nuclear power and weapons. Morgan, who died in 1999, began to offer court testimony for people who said they had been harmed by the nuclear power industry.

“Nobody is talking about the fact that there is no safe dose of radiation,” Cabasso added. “One of the reasons Morgan said this is because doses are cumulative in the body.”

The National Academy of Sciences (NAS) published a report in 2006 titled “Biological Effects of Ionizing Radiation (BEIR) report, VII Phase 2.” NAS BEIR VII was an expert panel that reviewed available peer reviewed literature and wrote, “The committee concludes that the preponderance of information indicates that there will be some risk, even at low doses.”

The concluding statement of the report reads, “The committee concludes that the current scientific evidence is consistent with the hypothesis that there is a linear, no-threshold dose-response relationship between exposure to ionizing radiation and the development of cancer in humans.”

This means that the sum of several very small exposures to radiation has the same effect as one large exposure, since the effects of radiation are cumulative.

For weeks, engineers from Tokyo Electric Power (Tepco) have been working to restore power to the plant and have resorted to having seawater sprayed on radioactive fuel rods that have been at risk of meltdown.

Despite this, Japanese officials conceded to the public on March 31 that the battle to save four crippled nuclear reactors at the Fukushima Daiichi nuclear plant has been lost. On March 29, a U.S. engineer who helped install the reactors at the plant said he believed the radioactive core in unit Number 2 may have melted through the bottom of its containment vessel, and onto a concrete floor.

Tepco’s chairman, Tsunehisa Katsumata, said they had “no choice” but to scrap the Number 1-4 reactors, but held out hope that the remaining two could continue to operate, despite the fact that he admitted the nuclear disaster could last several months. It is the first time the company has admitted that at least part of the plant will have to be decommissioned.

But the government’s chief spokesman, Yukio Edano, repeated an earlier call for all six reactors at the 40-year-old plant to be decommissioned. “It is very clear looking at the social circumstances,” he said.

Even after a cold shutdown, scrapping the plant will likely take decades, and the site will become a no-man’s land.

Tons of nuclear waste sit at the site of the nuclear reactors, and enclosing the reactors by injecting lead and encasing them in concrete would make it safe to work and live a few kilometers away from the site, but is not a long-term solution for the disposal of spent fuel, which will decay and emit fission fragments over tens of thousands of years.

Near the plant, the radiation levels dangerously escalated to 400 milliseiverts/hour. Considering background radiation is on the order of 1 milliseivert per year, this means residents would get a yearly background dose every nine seconds, based on industry and governmental “allowable” radiation exposure limits.

That compares with a national “safety standard” in the U.S. of 250 millisieverts over a year. The U.S. Environmental Protection Agency says a single dose of 1,000 millisieverts is enough to cause internal hemorrhaging.

Meanwhile, more than 168 citizen organizations in Japan submitted a petition to their government on March 28 calling for an expanded evacuation zone near the Fukushima nuclear disaster site. The groups are also calling for other urgent measures to protect the public health and safety.

Residents of evacuated areas near the stricken Fukushima nuclear plant have been warned that they may not be able to return to their homes for months as Japan’s nuclear crisis stretched into a third week.

The neighborhoods near the plant will remain empty “for the long term,” Yukio Edano, the country’s chief cabinet secretary, said on April 1. Though he did not set a timetable, he said residents would not be able to return permanently “in a matter of days or weeks. It will be longer than that.”

The official evacuation zone remains only 20 kilometers, while the government has encouraged people within 30 kilometers to evacuate. Yet levels of caesium-137 in the village of Iitate, for example, have been measured at more than twice the levels that prompted the USSR to evacuate people near Chernobyl. Iitate is 40 kilometers northwest of Fukushima.

Radioactive iodine has already been found in the tap water in all of Tokyo’s 23 wards. The U.S. Nuclear Regulatory Commission had already recommended an 80-kilometer evacuation zone for U.S. citizens in Japan.

Ironically, this month marks the 25th anniversary of the Chernobyl nuclear disaster.

“There are still no-go areas there, and the workers town has long since been abandoned, and we are seeing radioactive refugees from there, like we are now seeing generated in Japan,” Dr. Kathleen Sullivan, a disarmament educator and activist who has been engaged in the nuclear issue for over 20 years told Al Jazeera, “Tepco is trying to cover their rear end, and the Japanese government is being cagey about it, and I believe people don’t understand that radiation is a major problem and issue.”

Dr. Sullivan cited Albert Einstein, who said, “The splitting of the atom changed everything, save man’s mode of thinking; thus we drift towards unparalleled catastrophe.”

“So we don’t understand this mistake because of the timeless invisible nature of the problem that radiation is,” Sullivan, who has been an education consultant to the UN Office for Disarmament Affairs, added.

Some experts have warned of a nightmare scenario where clouds of radioactive material could spread lethal toxins across the planet for months on end if the spent fuel rods catch fire due to lack of coolant. The Central Institute for Meteorology and Geodynamics of Vienna told New Scientist on March 24:

Japan’s damaged nuclear plant in Fukushima has been emitting radioactive iodine and caesium at levels approaching those seen in the aftermath of the Chernobyl accident in 1986. Austrian researchers have used a worldwide network of radiation detectors–designed to spot clandestine nuclear bomb tests–to show that iodine-131 is being released at daily levels 73 percent of those seen after the 1986 disaster. The daily amount of caesium-137 released from Fukushima Daiichi is around 60 percent of the amount released from Chernobyl.

The same group of scientists stated, “The Fukushima plant has around 1760 tons of fresh and used nuclear fuel on site,” while, “the Chernobyl reactor had only 180 tons.”

According to a report from the New York Academy of Sciences, due to the Chernobyl disaster, 985,000 people have died, mainly from cancer, between 1986-2004.

Monitors have detected tiny radioactive particles which have spread from the reactor site across the Pacific to North America, the Atlantic and even Europe. Andrea Stahl, a senior scientist at the Norwegian Institute for Air Research, told Reuters, “It’s only a matter of days before it disperses in the entire Northern hemisphere.”

Tens of thousands of people living near the plant have been evacuated or ordered to stay indoors, while radioactive materials have leaked into the sea, soil and air.

March 28 also marked the 32nd anniversary of the Three Mile Island nuclear disaster in Middletown, Pa., in the United States.

Sullivan explained that when dealing with long-lived radioactive materials, in addition to carcinogens there are inter-generational effects that include the mutation of the genetic structure of life. “This is permanent and irreversible,” she added.

Sullivan uses Fukushima reactor Number 3 as an example, because it is fueled with Mox fuel uranium and plutonium. Plutonium has a half-life of 24,000 years, which means it is carcinogenic and mutagenic for up to 250,000 years, or 12,000 human generations.

“That’s not really understandable or explainable in a conventional sense of knowing,” Sullivan said, “We have to apply our moral imagination to 12,000 generations to even begin to understand what we are doing in this moment.”

This article was originally published on Al Jazeera.