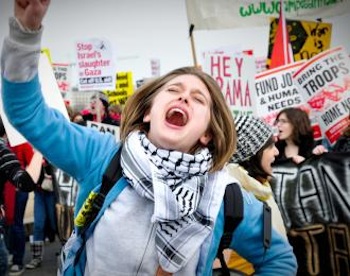 Barack Obama, the winner of the 2009 Nobel Peace Prize, is in command of the world’s most powerful war machine–and it has been kicked into overdrive, with escalating wars abroad and greater repression at home.

The U.S. still has 50,000 troops plus tens of thousands of private contractors in Iraq. In Afghanistan, another 100,000 U.S. troops are deployed, twice the number from when Obama took office. In Pakistan, Somalia and Yemen, the U.S. has carried out air strikes, with the death toll mounting by the month. And now, the Obama administration is leading NATO’s war on Libya.

Meanwhile, the U.S. continues to run a prison camp at Guantánamo Bay, Cuba; the FBI has carried out raids against at least two dozen Palestine solidarity activists; and Obama’s latest reversal on civil liberties was to announce that Khalid Sheikh Mohammed, the alleged mastermind of September 11, would be tried in a military tribunal at Guantánamo instead of a federal court.

At the same time, the harsh budget cuts and austerity measures that followed in the wake of the worst economic crisis since the Great Depression have put a spotlight on the connection between lavish spending on war overseas and calls for “shared sacrifice” at home.

That’s why the national antiwar mobilizations this weekend–on April 9 in New York City and April 10 in San Francisco–come at a critical time. They are especially important to publicize, build and participate in.

The world is generating new potential audiences for antiwar ideas and organizing, and it’s up to activists to find creative ways to connect the people who want to stand together in solidarity–from opponents of war and occupation, to workers in Wisconsin and elsewhere fighting austerity, to the people of Egypt and Tunisia who overthrew their dictators, to the rebellions still unfolding in the Arab world. We can start this weekend.

During the 2008 presidential campaign, Barack Obama’s stated opposition to the U.S. war on Iraq inspired many people fed up with eight years of the Bush administration’s cowboy diplomacy and arrogant expansion of U.S. military power. But though Obama has a different style, the content of his foreign policy has been a continuation, rather than a break, with the Bush agenda.

By highlighting his reputation for a “kinder, gentler” approach to world affairs, Obama won new allies and disarmed critics, at home and abroad–even as the number of foreign wars that the Pentagon is engaged in multiply and escalate. The “humanitarian intervention” in Libya is only the latest effort by Obama, in the wake of the disastrous occupations of Iraq and Afghanistan, to win new legitimacy for the use of U.S. troops in the Middle East.

Obama’s apologists say that at least he’s better than a Republican in the Oval Office. But the truth is that the Democratic Commander-in-Chief is responsible for a human toll every bit as terrible as his predecessor–from the casual disregard for human life on display in the actions of the U.S. Army’s “Kill Team” in Afghanistan to the shocking level of civilian casualties caused by drone attacks in Pakistan, now estimated at 32,000 dead.

Obama also pledged to bring a new commitment to civil liberties and government transparency to Washington. Yet Pfc. Bradley Manning, the alleged source of classified documents released by WikiLeaks, faces a possible death sentence and is being confined in near-total isolation and forced to sleep without clothing. These conditions led former State Department spokesperson P.J. Crowley to say that Manning’s treatment had been “ridiculous, counterproductive and stupid”–comments that appear to have led to his resignation days later.

It’s outrageous that Manning is facing possible execution for allegedly being involved in exposing the U.S. government’s embarrassingly close relationships with dictators around the world–while the Bush administration officials responsible for ordering torture and carrying out wars of aggression in violation of international law roam free.

But the fact is that Manning isn’t alone. The liberal Obama administration has prosecuted more whistleblowers in two years than the U.S. government managed in the previous 40 years.

Meanwhile, Democrats and Republicans are debating how to address the ballooning federal debt. Both parties are agreed on carrying out massive cuts in federal spending that will hurt the most vulnerable in society–the only difference between them is how far to go.

But neither will consider a significant reduction in military spending, even though just a 30 percent decrease in the Pentagon budget would save more than $2 trillion over the next decade, and still leave spending on the means of destruction almost 20 percent higher than when George Bush took office a decade ago.

Antiwar activism today must therefore confront a political question that was more easily dodged during the Bush years–the role of the Democratic Party as a coequal partner with Republicans in the U.S. imperialist project. That includes the liberal wing of the Democratic Party, which has been among the most enthusiastic supporters of the war on Libya, because the violence of the U.S. war machine has come has come in the guise of “humanitarian” intervention.

During the Bush years, after the initial massive mobilizations against the invasion of Iraq, the antiwar movement went into a prolonged decline–chiefly because leading organizations and figures were willing to tailor the agenda and activities of the movement to the needs of the Democratic Party’s electoral strategy.

Now that they control the White House again–and until this year both houses of Congress with big majorities to boot–it’s clear the Democrats aren’t allies of the antiwar movement.

The challenge now is to rebuild activism on the basis of independence from the two mainstream parties–and the demonstrations this weekend will be a step in this direction. The mobilizations are spearheaded by the United National Antiwar Committee and have drawn together labor unions, student activists, Arabs and Muslims, military veterans, defenders of civil liberties, Palestine solidarity activists and more.

The impressive breadth of the organizations endorsing the demonstrations is a reflection of the new mood of resistance taking root in the U.S. and around the world–especially in the Arab world, where two U.S.-allied dictatorships in Tunisia and Egypt have fallen already this year and more regimes are threatened by mass rebellion.

That same spirit took root in the American Midwest with the challenge to Republican austerity and union-busting in Wisconsin and other states. The inspiration of the revolutions in the Middle East was obvious from the popular slogan “Fight like an Egyptian”–a stark contrast from the years of Islamophobia and demonization of Arabs that accompanied the “war on terror.”

Accompanying the protests against austerity and the even wider discontent has been a further rejection of what the media and the politicians once portrayed as the “good war”–the occupation of Afghanistan. A recent Washington Post/ABC News poll found that nearly two-thirds of Americans now say that war in Afghanistan is no longer worth fighting.

The poll also highlights a growing gap between the actions of the Obama administration and the expectations of the millions of people who supported Obama in 2008. As the Post reported:

Nearly three-quarters of Americans say Obama should withdraw a “substantial number” of combat troops from Afghanistan this summer, the deadline he set to begin pulling out some forces. Only 39 percent of respondents, however, say they expect him to withdraw large numbers.

The connection between austerity and war is obvious in the spending priorities of the federal government–no expense is spared for the Pentagon, while public-sector workers at every level of government are enduring wages freezes and worse, and desperately needed social programs are slashed to the bone.

Since 2001, the U.S. has spent nearly $400 billion waging war on Afghanistan, a country with an annual gross domestic product of $30 billion–and that’s a bargain compared to the nearly $800 billion spent on invading and occupying Iraq since 2003. Meanwhile, Wisconsin Gov. Scott Walker is stripping public-sector unions of collective bargaining rights and attacking workers’ compensation to save about $150 million–roughly 0.03 percent of war spending in Afghanistan.

Another encouraging aspect of this weekend’s protest is the new level of participation from Arab and Muslim communities, which have suffered the brunt of the war at home unleashed by the federal government. In particular, the recently formed Muslim Peace Coalition drew together 100 imams in New York, New Jersey and Connecticut to call on Muslims to attend the April 9 rally in New York City “to oppose wars, condemn terrorism and fight Islamophobia.”

There will also be a pro-Palestine contingent in New York that aims to show how U.S. support for Israel’s ongoing colonization of Palestine is connected to Washington’s backing for other dictatorships in the region–a clear indictment of U.S. government claims to be acting in the interest of “human rights” and “saving civilian lives” in Libya today.

The combination of war abroad, austerity at home and renewed confidence among activists presents an exciting opportunity to make antiwar and anti-imperialist ideas relevant to a new generation of workers, students and others looking for alternatives to war and repression. Anyone dedicated to the struggle for justice should look forward to the largest possible turnout on April 9 and 10.