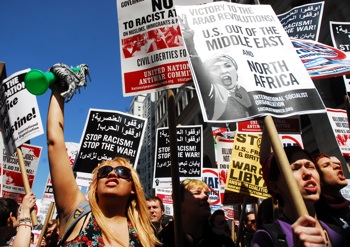 MONEY FOR JOBS, NOT WAR: Protesters march down Broadway from Union Square to Foley Square during an April 9 demonstration organized by the United National Antiwar Committee. An estimated 5,000 people protested against the wars in Libya, Afghanistan and Iraq, the Guantanamo prison camp and the harsh punishment meted out to accused WikiLeaker Bradley Manning.