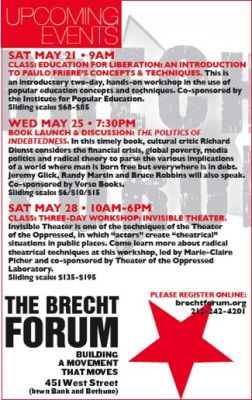 TUE MAY 24
7-10pm • Free
SCREENING: HIGH PEAKS, LOW COAL. Join local group New York Loves Mountains for an evening of film, discussion and music to learn more about how mountaintop removal harms Appalachian communities. There will be a screening of the documentary Low Coal followed by a discussion with the film’s director, Jordan Freeman, and former union coal miner Chuck Nelson. Stick around afterwards for music by Morgan O’Kane who composed the score for the film.
The Commons, 388 Atlantic Ave, Bklyn
347-689-3908 • thecommonsbrooklyn.org

7-9pm • $11
PERFORMANCE: THE REVOLUTION WILL BE LIVE-STREAMED. Hybrid Theatre Works presents an artist response forum featuring works of theater, dance, video, and visual art that explore the implications of recent uprisings in the Middle East and the role of the internet. The performances will be followed by an after-party.
Alwan for the Arts, 16 Beaver St
646-732-3261 • alwanforthearts.org

THU MAY 26
7:30pm • $6/$10/$15
TALK: STOP SIGNS: CARS AND CAPITALISM ON THE ROAD TO ECONOMIC, SOCIAL AND ECOLOGICAL DECAY. Join authors Yves Engler and Bianca Mugyenyi for a discussion of their new book Stop Signs, which explores the role of the automobile in the rise of capitalism as well as its connection to racism, media manipulation, environmental destruction and war.
Brecht Forum, 451 West St
212-242-4201 • brechtforum.org

JUNE 3–12
Various times • $8/$10
FESTIVAL: 2011 BROOKLYN FILM FESTIVAL. More than 100 films will premiere this year at the Brooklyn Film Festival, whose mission is to bring the power of independent filmmaking to all Brooklyn and city residents. This year the films will tackle issues ranging from corporate takeovers and wars to abusive relationships and the role of government in modern society. Films will be screened at both Brooklyn Heights
Cinema (70 Henry St, Bklyn) and
indieScreen (289 Kent Ave, Bklyn).
718-388-4306 • brooklynfilmfestival.org

SAT JUNE 4
5-8pm • $75
BENEFIT: ECOFEST AND CELEBRATION BY THE EAST RIVER. Join the Lower East Side Ecology Center in their annual Ecofest benefit to celebrate their accomplishments this year and to help make another year possible. The evening will feature delicious gourmet seasonal treats from local chefs as well as music by the Lucky Chops Brass Band.
East River Park Amphitheater
212-477-4022 • lesecologycenter.org

SUN JUNE 5
10am-4pm • Free
RALLY: OUR PLANET, THEIRS TOO. In commemoration of the billions of animals that die each year from human cruelty, there will be a requiem ceremony in Union Square followed by an afternoon festival of food, displays and other attractions.
Union Square • ourplanetnyc.org

THU JUNE 9
9pm • Free
FILM: BATTLE FOR BROOKLYN. Enjoy documentary cinema in the great outdoors with Rooftop Films, a Brooklyn-based film program screening movies throughout the summer. Battle For Brooklyn follows the struggles of Brooklyn community members fighting the massive development project, Atlantic Yards, and the company behind it, Forest City Ratner. This screening is in partnership with the Brooklyn Film Festival.
Fort Greene Park
718-417-7362 • rooftopfilms.com

Sign up to receive our weekly calendar via email at indypendent.org.