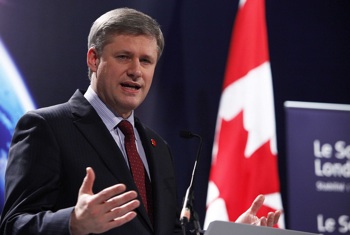 TORONTO, Canada—By winning a majority in the 308-seat House of Commons in Canada’s May 2 election, Prime Minister Stephen Harper and his Conservative Party seem to be consolidating a political shift to the right, but appearances can be deceiving. Harper now has 167 members of parliament to push the right’s agenda of militarization, attacks on public-sector unions, criminalization of poverty and dissent, ecologically devastating energy policy and the smothering of democratic space.

But the same election propelled the left-leaning New Democratic Party (NDP) into the position of Official Opposition for the first time ever. The NDP increased its parliamentary bloc from 37 to 102 seats, coming at the expense of the once-mighty Liberal Party (Canada’s equivalent of the Democratic Party), which dropped to 34 seats, and the sovereigntist Bloc Quebecois, which shriveled from 49 seats to four.

Both Harper and Jack Layton, leader of the social-democratic NDP, got the results they were aiming for. Harper got his majority and Layton replaced the Liberal Party as not just the opposition but possibly as the only federal alternative to the Harperites.

Because of Canada’s first-past-the-post system, a candidate can win with well under 50 percent if the vote is split multiple ways, Harper’s party won only 39.6 percent of the national vote. This means more than 60 percent of the electorate rejected the Conservatives, so there has not really been a shift to the right. The political and economic elite have veered right since the late 1980s, when Conservative Prime Minister Brian Mulroney — also opposed by some 60 percent of voters — pushed through free-trade pacts with the United States, culminating in the North American Free Trade Agreement that went into effect in 1994; public opinion on most critical issues, meanwhile, has remained progressive.

POLARIZED ELECTORATE
This election signified foremost a polarization: for and against Stephen Harper, whose vote increased by only 2 percent over the 2008 election. He went from a minority to the first majority Conservative government since 1988 by focusing on key ridings (as electoral districts are known) in Ontario province where he could beat the Liberals. What no one expected was for Jack Layton to become the alternative to Harper.

Harper is an Evangelical Christian but social conservatism has never been his priority. Since he came to power in 2003 as head of the Conservatives, which unified the populist, socially conservative Reform Party with the fiscally conservative Progressive Conservative Party, Harper’s goal has been to fashion a new middle in Canadian politics further to the right.

To keep this alliance intact and maintain the support of the corporate media, Harper will be limited in his ability to restrict reproductive rights and LGBT rights. The Religious Right here is losing steam. A recent study by Environics, a top polling firm, found that 75 percent of Canadians support a woman’s right to abortion and 70 percent support gay marriage, both increases over the last 10 years. The vast majority support single-payer public healthcare and think taxes are generally beneficial, even if they are unsure if the tax system is fair.

The real dangers of a no-holds-barred Conservative government include suffocating democracy and civic engagement, as witnessed by the systematic police brutality in Toronto during the June 2010 G20 summit; high levels of militarization, with military spending having jumped more than 40 percent under Harper; increasing criminalization of poverty; attacks on public sector unions; and more support for Alberta tar sands oil production, one of the most carbon-intensive projects on the planet. Harper has already altered the tax system in favor of corporations and the rich, so the gap between rich and poor, which increased under both Conservative and Liberal governments, will continue to grow.

WHY HARPER WON
Harper won a majority for a number of reasons. Right-wing Liberal voters moved to the Conservatives to stop the NDP from winning more seats, Canada has weathered the global economic crisis significantly better than its neighbor to the south, business interests and the corporate media enthusiastically backed Harper, and the Conservatives targeted and won more support from Asian communities in Toronto, which have been until now a Liberal stronghold. Unlike the Tea Party or Canada’s Reform Party, Harper’s party is not overtly anti-immigration. Its tactic is to create divisions between “good” and “bad” immigrants by criminalizing refugees and other marginal immigrants.

In the battle against Harper, many progressives called for “uniting the left” either by creating a Liberal-NDP coalition or by voting for whichever candidate could defeat the Conservative in a specific race. As Canada is a parliamentary democracy, individual parties choose their slate, including the prime minister, prior to the election and whichever party wins the most seats gets to form the government. 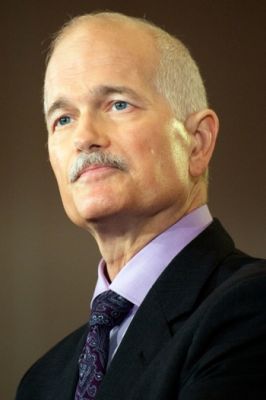 THE QUEBEC FACTOR
In Quebec, always more progressive than the rest of the country, voters swung behind the NDP as a way to defeat Harper. Voters were also fatigued with the sovereigntist Bloc Quebecois, which has had a majority in Quebec since 1993, and increased the NDP caucus from one to 58 seats in the French-speaking province. With polls showing broad Quebecois support for Layton, the NDP vote in English Canada also increased, garnering them five more seats. But this allowed the Conservatives to win in more ridings because the opposition vote was then split between the Liberals and the NDP. Having an NDP caucus that is half Quebecois can bring together the concerns of progressives in Quebec and English Canada, which is a positive sign, as they often have little to do with each other.

An NDP opposition also means a greater voice for social movements in Parliament. Layton and much of his caucus are strong feminists and supporters of LGBT rights, and he has already called for a federal inquiry into the G20 repression. Layton has opposed the continued military intervention in Afghanistan but pledged during the election to maintain military spending, returning Canadian troops to more of a peacekeeping role.

NDP AS ALTERNATIVE
It remains to be seen whether the Liberal Party will rebuild itself or if Layton will succeed in positioning the NDP as the alternative to the Conservatives. For progressives, what is most important is to ensure that the NDP, which has accepted neoliberal economic policies, is pushed to stand up for progressive issues. In power, the NDP has always moved to the right under the pressure of governing a capitalist state, but Jack Layton has moved in this direction to get into a position to take over the Liberals. However, what really changed was that while the NDP remains federalist, Jack Layton has clearly stated that he supports the aspirations of the people of Quebec to protect their language, culture and autonomy.

What the NDP does in parliament hinges on whether grassroots movements can pressure the party through a broad mobilization, which they did during the election. State funding is no longer available for movements that directly challenge the government. For too long, progressive social groups and unions have relied on old tactics and old methods, and mainly talked to each other. They need to link up with vulnerable sectors, especially communities of color in and around big cities like Toronto.

How trade unions will react to the Harper majority is an open question. Despite political attacks against public-sector unions, as well as deindustrialization, which has weakened private-sector unions and driven wages and benefits down, union militancy has not increased. Unionization in Canada has declined in recent years, but it remains at 31.4 percent of the workforce, and even higher among public workers. Harper is likely to attack public-sector unions through privatization, perhaps beginning with the postal workers, one of the most militant unions in the country.

Building broader support for an environmental justice movement against the tar sands, mining and clear cutting is another component of the resistance to Harper’s government, which is trying to undermine national and international agreements to address global warming.

Finally, many of the youth who mobilized during the election organized a National Day of Action for Electoral Reform. They say the majority voted against Harper and now they are going to hold him accountable. While there has been organizing for electoral reform in Canada since the early 1990s, including two unsuccessful provincial referenda, there has never been street action, so it is a promising start. Their aim is to build a movement for electoral reform to prevent this type of election result from happening again.

Judy Rebick is a long-time feminist activist, journalist and writer living in Toronto.