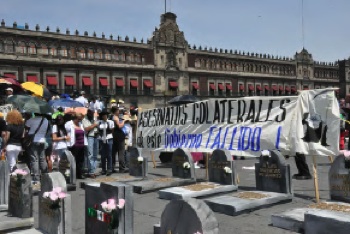 SAN CRISTOBAL, Mexico—This nation is caught in the grip of an escalating drug war that has cost 40,000 lives in the past five years. The daily body count varies but is usually measured in the dozens. Methods of extermination range from decapitation and mutilation to asphyxiation and a bullet in the head. Most Mexicans have become numbed to the extreme cruelty and hope they don’t get swept up in the river of blood.

Once in a while, however, a single incident can trigger a powerful reaction. Juan Francisco Sicilia was one of seven friends found bound and murdered on March 28 south of Mexico City, with evidence pointing to a drug cartel. His killing has sparked a national mobilization and a new movement aimed at shifting government policy away from perpetual warfare and toward an integrated political solution.

Javier Sicilia, poet and father of Juan Francisco, launched “The March for Peace with Justice and Dignity,” a three-day event that culminated in a rally in Mexico City. The idea was simple – a silent march and a single slogan: “Estamos hasta la madre, no mas sangre.” “We’ve had it up to here, no more bloodshed.” This idea captured the popular imagination and on May 8 hundreds of thousands of people marched all over Mexico demanding a radical change to government policy.

In southeast Mexico, the Zapatista National Liberation Army (EZLN) answered the call and announced their plan to march into San Cristobal de las Casas on May 7, the town where the Zapatistas first appeared in January 1994. It has been five years since the Zapatistas last mobilized in this manner, and many people remember the movement as a noble insurrection that inspired millions but ultimately fizzled out, victim of a bitter debate over the pitfalls and possibilities of electoral politics.

The return of the Zapatistas to San Cristobal thus seemed like a reckoning. Could the Zapatistas match the years when they could gather more than 10,000 masked rebels to occupy the city, watched by nervous local elite who pulled the
shutters down and held their breath till the indios left?

Since 2006 the Zapatistas have consolidated their autonomous rule across five “caracoles,” self-governing councils whose delegates take turns to “be the government,” learning the ropes before passing the torch to delegates from another village. The goal is to allow many people to learn how to “be the government” without giving birth to a professional, bureaucratic political class.

The Zapatistas have also largely severed ties with visiting NGOs and no longer encourage foreigners to visit their communities. Thousands of outsiders, trekking in to jungle communities to learn how to make revolution, came in good faith. They served as an important buffer against army and paramilitary forces in the late 90s, but they also disrupted daily life and generated inequalities and jealousy as gifts and money were left behind.

When May 7 arrived, San Cristobal was drenched in warm sunshine and an air of expectancy filled the main square where TV crews jostled for position in front of an improvised stage. The Zapatistas arrived in a long, winding trail of men and women of all ages, each one wearing a ski mask that bore a number representing the caracole from which they came. The square quickly filled to overflowing, and by the time the Zapatista comandantes opened the event with Mexico’s national anthem, the rebels had already won a major victory by organizing the biggest march San Cristobal has ever seen. Some 20,000 rebels were present, bringing with them the fragrant aroma of corn and wood smoke, and the elusive element of community cohesion, described by one analyst as “the sacred fire of the movement.” Getting that many rebels to San Cristobal was an enormous effort as each community was in charge of its own transport and food at a time when corn, rice and beans are scarce.

The Zapatistas have an ambivalent relationship with the rest of Mexico. “Here we are,” their silence seems to say. “We have territory and self rule in our small corner of the country, what have you done?”

The images of Javier Sicilia, a lone individual leading a march of the indignant and the impotent in Mexico City, contrasted sharply with Zapatismo. The rebels moved as one, arriving and leaving in formation, sharing transport and territory. This cohesion is amplified by the shared “means of production,” the milpa or cornfield that forms the basis for survival across regional and linguistic boundaries.

The 30 comandantes of the Clandestine Indigenous Revolutionary Committee who formed a guard of honor on the stage melted into the crowd after the event, their faces unknown, their words attributable to no one.

Nonetheless, the situation is fragile as the Zapatista communities struggle to survive and withstand the twin pressures of army and paramilitary aggression and state funds used to tempt rebels away from the Zapatista ranks.

Meanwhile, the next day in Mexico City, at least 70 victims of violence took turns to speak out, including Patricia Duarte, whose infant son was burned to death in a crèche in Sonora along with 47 other children. In Mexico today, the state of insecurity covers everything from the village of San Juan Copala, Oaxaca, whose inhabitants were forced to flee en masse last year due to state-sponsored violence and the parents of those children who died in the nursery. San Juan Copala declared an autonomous zone, Zapatista-style, on Jan. 1, 2007 and was immediately besieged by paramilitaries with close links to the state governor. Unlike the Chiapan rebels they had no weapons to back up their claims.

Mexican President Felipe Calderon responded to the march with a televised address in which he equated the call for an end to state violence with surrender to the drug cartels. “We have might, right and the law on our side,” said a belligerent Calderon, insisting that the army would remain on the streets and at the center of his national security strategy.

Mere days after the march, Amnesty International released a report accusing Mexican security forces of torture, disappearances and murder, including charges of disguising innocent victims of army violence as members of drug gangs. Amnesty also criticized Mexico’s justice system for failing to charge a single member of the armed forces with criminal activity despite dozens of well-documented cases.

Juan Sicilia countered, “We are not trying to overthrow the government. We want to rebuild the social fabric of this nation.” Sicilia said that the Mexican people were paying an intolerable price for an unwinnable war that no one asked for, the course of which is determined by politicians “in upscale restaurants and offices paid for by us.” By the end of the three-day march Sicilia’s tone had hardened, recognizing perhaps that Calderon had no intention of paying him any heed. Sicilia called for civil disobedience should the government ignore their demands. “It takes balls to strike back, to refuse to pay taxes, and it will take all of us to surround parliament until our demands are heard.”

Sicilia has launched a citizen initiative that is gathering momentum and which has no affiliation with Mexico’s discredited political parties. In 2006 the EZLN launched “la otra campana,” the other campaign – an attempt to build a popular movement that would eschew elections and challenge the state from below. If there is one lesson learned since 1994, it is that the Zapatistas cannot carry the burden of hope alone and that the rest of Mexico must do its own share of the heavy lifting.

“We know you didn’t understand anything,” joked one Zapatista delegate in San Cristobal, referring to the translation of each speech into several indigenous languages. “But that’s the way it goes, you just had to put up with us. Thank you for your patience.”

The Zapatistas remain the ever-patient outsiders in a country rent by violence and corruption, quietly building an autonomous alternative, a living example of what a disciplined, long-term struggle can achieve. “You are not alone,” said Comandante David during the rally, addressing victims of violence throughout Mexico. The Zapatistas have been alone for too long, and derided for lacking “common sense” and refusing to throw their weight behind the lesser of three evils at election time.

With just a moment in the limelight Javier Sicilia has already concluded that if Mexico’s political system fails to respond to the current crisis of representation, and if a sweeping new security law is approved, the 2012 presidential elections shall be a pointless exercise: A candidate bound and gagged by institutional corruption will be elected to lead a nation edging dangerously close to a politico-military dictatorship.

Michael McCaughan is a writer and researcher based in the Burren, Ireland. He is working on a biography of Mumia Abu-Jamal.