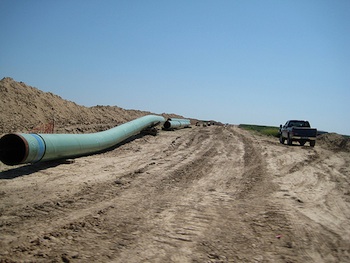 Bill McKibben, Naomi Klein, James Hansen, Maude Barlow, Wendell Berry and others have circulated a letter calling for civil disobedience to stop the Keystone Pipeline. The 1600 mile proposed pipeline would run from the tar sands in Alberta, Canada to oil refineries in Texas.

Thursday, the House Energy committee approved legislation that requires President Obama to make a decision on the Keystone Pipeline by November. The bill passed in a 33-13 vote with the support of six Democrats. It will move to the House for a vote later this summer.

The direct action to protest the Keystone Pipeline will take place in the second half of August.

Environmentalists opposing the tar oil sands exploration and the pipeline cite a number of reasons for serious concern. In an interview with Earth Island Journal, Bill McKibben said “The Alberta tar sands are one of the two or three biggest pools of carbon on earth. Building more pipelines means increasing the speed with which that carbon is poured into the atmosphere. As the NASA climatologist James Hansen said recently, if we start to use such unconventional oil, it’s ‘essentially game over’ for the climate.”

In addition to concerns about the greenhouse gas emissions generated and released into the atmosphere through oil sands production, environmentalists have also called attention to the Ogalalla aquifer over which the proposed pipeline would run and which it might potentially pollute.

In an interview with Earth Island Journal, Maude Barlow of the Council of Canadians said, “The Keystone Pipeline is a dangerous project. I object to it on several grounds. First, the proposed pipeline will travel right over the spine of the Ogallala Aquifer, 400 kilometers [248 miles] of a vast underground water source that supplies drinking water and irrigation to the whole region.” Environmentalists have pointed out that there are leaks at TransCanada’s existing pipelines.

Bitumen is another word for sticky tar-like form of petroleum that resides in Alberta’s tar sands and which the pipeline would transport. Barlow added, “Second, the processing of bitumen is environmentally damaging, both in the excessive greenhouse gases it releases, and in the water it pollutes. For every unit of oil refined, three to five units of water are destroyed.

“Finally,” Barlow states, “any investment in tar sands refining lengthens the life of the project and ensures that they will be mined for years to come when what we should be investing in is the alternative energy technology.

“The struggle has moved to the U.S. We want to send a message that the corporations can no longer make decisions for all the great issues of our time and that Canadians and Americans are standing shoulder to shoulder to oppose the growth of one of the most destructive projects on earth.”

McKibben stated that he hopes the call for direct action will bring out a diversity of people, “a great array of ages, including those of us who’ve been pouring carbon into the atmosphere for many years.”

Tina Gerhardt is an independent journalist who covers climate change, international negotiations and energy policy. Her work has appeared in Alternet, Environment News Service, Grist, In These Times, The Nation and The Progressive. She has also appeared on The Laura Flanders Show, the National Radio Project, KPFK and WBAI.

This article was originally published by Earth Island Journal.