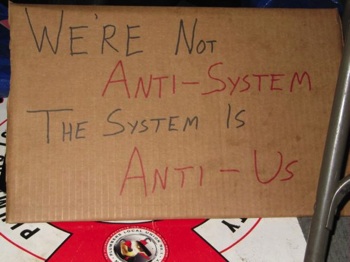 The 13 protesters arrested Tuesday for blockading the entrance to an office building in which City Council members were making final preparations to approve a city budget laden with budget cuts were freed Wednesday evening.

Many of the arrestees broke into smiles when they entered the courtroom in which about a dozen of their supporters were on hand to greet them including a woman who held up a piece of paper with “Free the Bloombergville 13” scrawled on it. The 13 demonstrators each pled guilty to a single charge of disorderly conduct and were released with time served and a $120 fine.

“I would like to say I have never met happier defendants,” the presiding judge marveled at one point during the proceedings. “I hope you are as happy to leave this courtroom.”

Bloombergville is a round-the-clock encampment located across the street from City Hall at the corner of Park Place and Broadway. It was established on June 14 to protest Mayor Michael Bloomberg’s plan to layoff 4,100 teachers, close 20 firehouses and impose deep cuts on a number of vital city services and programs.

Several members of the Bloombergville 13 told The Indypendent that their brief stint in jail provided a first-hand view of the disparities that exist in New York City where 1 percent of the population garners 44 percent of the income and the people they spent the day with in the holding cells at central booking were all Blacks and Latinos, most of whom were facing minor charges – possession of marijuana, open container, jumping a subway turnstile, being in a city park after hours.

“Jail is full of working class people of color. Nobody in jail was white except us. It’s absurd,” said Yotam Marom.

The protesters’ time in jail also gave them a chance to discuss their actions with other inmates. “We were treated like heroes,” said Sara Flounders. “People were like, ‘you were arrested for a cause? That’s wonderful.’ They knew big cutbacks were coming and could relate to what we had done.”

A third member of the Bloombergville 13, Pat Korte, said that while their jailers expressed sympathy with the goals of the protest, they hoped a long night in jail would discourage the mostly young activists from getting arrested again.

“I think it hardens our commitment,” Korte countered. “And I hope there will be a lot more people in the streets fighting capitalist austerity in the future.”

Also on Wednesday, City Council passed a final budget. The budget averts teacher layoffs and the closing of firehouses but is expected to result in the layoff of 1,000 city workers, larger school class sizes and cuts in funding for city libraries and scholarship money for CUNY students.

There will be a General Assembly at Bloombergville at 6:30 pm this evening to discuss the future of the encampment including whether to disband it to pursue other organizing strategies.

Bloombergville Lives: Consigned to a Sidewalk Across from City Hall, Protesters Refuse to Give Up but Struggle to Increase Their Numbers by John Tarleton

New Yorkers Unite to Fight the Rich: But Can They Win? by John Tarleton