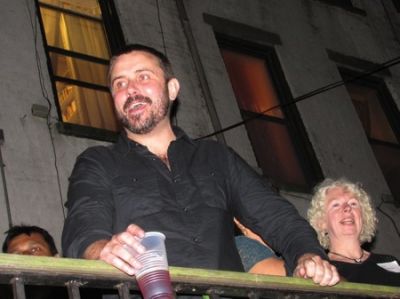 BENEFIT: On June 2 The Indypendent and the Brooklyn Food Coalition (BFC) teamed up for a joint benefit, which was held in Park Slope, Brooklyn at the home of Nancy Romer and Lew Friedman.

Jeremy Scahill, the author of Blackwater: The Rise of the World’s Most Powerful Mercenary Army, attended the event and spoke to attendees about the importance of media activism and food justice.

Nearly 200 people attended, and guests enjoyed a home-cooked Indian feast, as well as dancing under the stars. Romer, the BFC Founder and General Coordinator, and Indypendent General Manager Arun Gupta said the fundraiser was a success, and both organizations look forward to working together again in the future.

Stay on the look out for future Indypendent benefits and events by visiting indypendent.org.