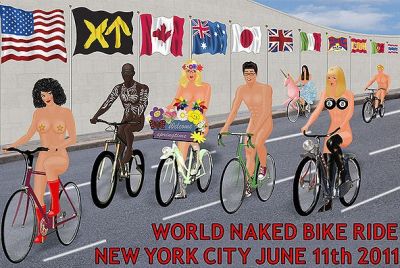 SAT JUNE 4
12:30pm • Free
ACTION: NYC SOLIDARITY RALLY FOR BRADLEY MANNING
Stand in solidarity with the rally in Ft. Leavenworth, Kansas and across the country in support of accused whistle blower Bradley Manning. Along with protest signs and banners there will also be a photo booth set up outside the recruitment center for people to participate in the online photo petition “I am Bradley Manning”.
Times Square Recruitment Center, W 44th St and Broadway
bradleymanning.org

7:30pm • $10/$5/Free
CONCERT: OXFAM’S 3RD ANNUAL AWARENESS CONCERT
Musical groups Under the Elephant and Ace Reporter will be performing for the Oxfam annual benefit this year.  Writing  one letter to Congress regarding foreign aid reform gets you a $5 discount and two letters get you free admission.
Union Hall, 702 Union St, BK
oxfamactioncorpsnyc.org

WED JUNE 8
7pm • Free
READING: The WHITE WOMAN ON A GREEN BICYCLE
Monique Roffey will be reading from The White Woman on the Green Bicycle, her novel that explores the legacy of colonialism in Trinidad (Roffey’s birthplace) against the backdrop of a failing marriage.
Bluestockings, 172 Allen St
212-777-6028 • bluestockings.com

7:30pm • $6/$10/$15
TALK: REVOLUTIONS IN NORTH AFRICA
The Elombe Brath Global Africa Lecture Series presents an update on the situation in Libya with Professors Younes Abouyoub & Ali Abdulatif.  Professor Abouyoub will speak about the current state of revolutions in Libya, Tunisia and Egypt as well as the violent developments in other countries in the region.  Professor Abdulatif will speak about the legacy of Italian-led genocide in Libya and its traumatic effect on national consciousness.
Brecht Forum, 451 West St
212-242-4201 • brechtforum.org

FRI JUNE 10
7:30pm • Free
FILM: PARIS IS BURNING
Join the Reel Resistance Film Series for the screening of another fascinating film. Paris is Burning is a documentary about social movements in the 1980’s that challenged sexual conventions and class distinctions.
Freedom Hall, 113 W 128th St
212-222-0633 • fsp@nyct.net

SAT JUNE 11
3-7:30pm • Free
ACTION: WORLD NAKED BIKE RIDE
Be a part of the world-wide movement to raise awareness about the dangers posed to our world and our bodies by automobile and oil dependency.  Preparation for the ride will begin at 3 with professional body painters on hand as well as decorations for bicycles.  The ride will begin no later than 6pm.  Clothing, of course, is optional and costumes are encouraged.  After-party to follow at the Times-Up space in Brooklyn (99 South 6th Street).
East River Park, Manhattan
times-up.org