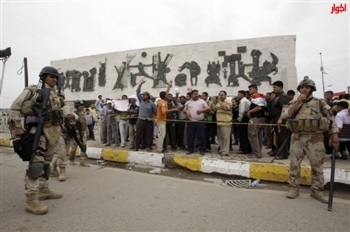 June 7 has been called ‘The Day of Retribution’ by Iraqi grassroots organizers. Nation-wide protests and sit-ins are planed against the US occupation as well as Nouri al-Maliki’s regime, coinciding with the Prime Minister’s own deadline, set exactly 100 days ago, to address Iraq’s protest movement’s demands. “Changes will be made in light of the evaluation results,” Maliki said in a statement in late February, referring to his cabinet members and their performance.

In response, a recently released call to action by the grassroots organization ‘Popular Movement to Save Iraq’ expresses a broadly held sentiment among Iraqis: the government’s promises are not to be trusted. “We admit that we weren’t really waiting, and didn’t hold out during this time. We were organizing actions with other organizations before and during the countdown to June 7th.” Seeing the date as a marker to draw more dissatisfied Iraqis into the protest movement, the statement continues: “But the end of the 100 day period, [with the government] having achieved nothing whatsoever, was the fuse we were waiting for, for those that were giving al-Maliki a chance, and were waiting for reforms from him, his government and corrupt parliament, to come out and demonstrate with us.”

The actions and demonstrations mentioned above have varied in their size, intensity and intent. Over the past 100 days, Friday demonstrations in Baghdad’s Tahrir Square have been a constant, sometimes swelling to involve thousands of participants whose grievances included the shocking lack of services like reliable electricity after nearly a decade of a new regime. Crucially though, demands have also often included the immediate withdrawal of the US occupation forces, the release of political prisoners, and the revocation of the sectarian constitution. (These facts are often omitted by the little coverage Iraq receives. A May 29th story by the new agency ‘Aswat al-Iraq’ for example, only mentions protestors “demanding an end of corruption, the improvement of public services and living standards of the people, as well as putting an end to unemployment in the country.”) These broader-aimed protests were most prominent during a 20-day long sit-in in the northern city of Mosul, launched on April 9th, 8 years to the day after Baghdad fell to occupying forces. Iraqi blogs and facebook pages are attempting to marshal the energy of that sustained action for June 7th, recalling that it grew to the tens of thousands, contained a lively, celebratory air including political poetry and theatre performances, and even pushed the governor of Mosul, Atheel al-Najifi, to openly defy Maliki’s forces and defend the right of Iraqis to demonstrate. In response to Maliki’s threats of a clampdown – backed by live ammunition –  nearly the entire city (Iraq’s second largest) went on a general strike on May 25th, and for one of the first times the magic words of the Arab spring were heard in Iraq “The people want the downfall of the regime!”

Another significant development in the Iraqi protest movement is the coordination between groups, as well as the clarity of their demands. Mainly through facebook, a consistent source of photos, videos and statements has become ‘The Media Office of The Great Iraqi Revolution and the February 25th Revolution Coalition.’ This is in addition to their launching of an Arabic-language website on May 19th [www.iraqirevolution.com] that includes exposes of corrupt politicians and profiles of organizers and activists.

Finally, in a joint statement signed by dozens of groups, such as ‘Movement to Liberate the South [of Iraq]’, ‘The Organization of Students of a Free Iraq’, ‘The National Organization of Tribal Leaders of the South and the Central Euphrates’, ‘Movement of Rising Iraqis’, ‘Coalition to Support the Iraqi Revolution’ and ‘Movement of Iraqi Youth’ a positive alternative to Iraq’s present reality begins to emerge: “[We] are not returning to our homes until al-Maliki steps down, the occupation leaves, corrupt politicians are held accountable, face trial, and the parliament is disbanded. We call for the formation of a transitional government of technocrats that can run the country for a temporary period, and after a period of no more than 6 months, they will set up transparent elections without regional or outside interference. [We] and the other organizations in coalition have decided not to enter into this transitional government, and limit our work to organizing sit-ins and demonstrations only, to bring down the occupation government.”

Observers of the Iraqi protest movement cannot help but notice that its numbers would swell whenever there was a visit by a US diplomat to the green zone. February 25th’s ‘Day of Rage’ followed hints from the US state department that US forces may need to remain, while many slogans in all over Iraq’s public squares were keyed to statements Joe Biden, John Kerry or Robert Gates had recently made. A key development in this regard was Nouri al-Maliki’s shift from denying the possibility of a US troop presence past the 2011 year-end deadline agreed upon in 2008’s ‘Status of Forces Agreement’, to saying on May 10th: “You want to make me say yes or no before I gather the national consensus?” al-Maliki retorted. “I will not say it.”

This combination then — of demands very similar to those of other pro-democracy movements in the Arab-world, political freedoms, transparency and lack of corruption, and due process rather than arbitrary force exercised by the police,  along with a powerful call for self-determination against a US occupation that has lasted longer than 8 years, and a clear Iranian influence on the Maliki-led coalition government —  makes Iraq unique, and makes Maliki’s regime especially glaring in its lack of legitimacy.

As Uday al-Zaidi, brother of shoe-throwing journalist and lead organizer of the ‘Popular Movement to Save Iraq’ puts it:  “We want dignity. If you look, when the protests began in Baghdad, we were not [just] asking for electricity or government subsidies. You hear here and there that these people are just looking for work, or job opportunities. They are wrong. We are a country that has lost its dignity and freedom. That is why our central demand is and will continue to be an end to the occupation, and an end to this political process which is built on a sectarian quota system.”

Perhaps sensing how vulnerable the top of the pyramid is, Iraqi police (and sometimes military) have launched a sever crackdown in the run-up to June 7th, arresting, questioning and sometimes torturing activists and their supporters. The crackdown has been so blatantly repressive, that even international human rights organizations, that have often been very quiet about Iraq, like Amnesty International have released condemnations, and calls for the release of the detained, like prominent blogger Ahmed al-Baghdadi.

The tactics though, seem to be outrunning the repression, with the method of writing meeting spots and dates on currency (pictured above) for wide dissemination, which was a very effective strategy most recently in Egypt, where, like in Iraq, the vast majority are without access to ‘facebook.’

Extending the metaphor, Uday al-Zaidi adds “This has shown us once and for all that terrorism and the Iraqi government are two sides of the same coin.”

Ali Issa is the national field organizer for the War Resisters League, lives in Brooklyn, and can be reached at Ali@warresisters.org.