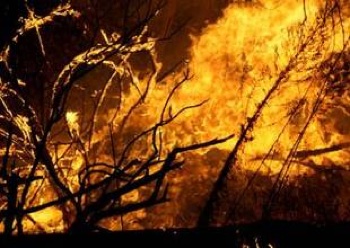 Numerous nuclear power plants face precarious scenarios as a result of climate change-induced extreme weather. Flooding of the Missouri river is being monitored around the Fort Calhoun nuclear power plant in Nebraska. And wildfires have reached the Los Alamos National Laboratory, which houses nuclear-contaminated waste, in New Mexico.

March’s disaster at the Fukushima nuclear power plant in Japan has raised broader concerns about the safety of nuclear power plants in the U.S. Most nuclear power plants are located near water, which they draw on for cooling. But with the extreme weather this spring, the Mississippi, Missouri and Platte rivers in the Midwest have flooded, in some cases to their highest levels in over 100 years.

On June 26, flooding in the Missouri river reached critical levels near the Fort Calhoun Nuclear Generation Station. The power plant, located about 19 miles north of Omaha, Nebraska, has been shut down since April 7 for refueling. Technicians decided to hold off on restarting the power plant due to predicted floods, which have been an ongoing concern since then. Eight-foot-high and 16-feet-wide rubber berms have been installed to protect the facilities against waters. Nuclear Regulatory Commission (NRC) Chairman Gregory Jaczko inspected the plant on Monday.

Eighty-five miles to the south, the Cooper Nuclear Station, located in Brownville, Nebraska, is also under close watch as a result of the Missouri river floods. There, too, berms have been set up to protect the power plant from flooding. NRC Chairman Jaczko inspected the plant on Sunday, where he said at a press conference, “One of the things we learned at the Fukushima event is the importance of dealing with natural hazards.”

On April 1, the NRC established a task force charged with gauging the existing safety of nuclear power plants in the U.S. In particular, the panel is to examine whether or not nuclear power plants are prepared to respond to natural disasters. To date, the task force has held two briefings. It is scheduled to report its findings on July 19.

Yet some have their doubts about the reliability of the NRC’s findings. ProPublica has reviewed inspection reports and found “problems with emergency equipment and disaster procedures that are far more pervasive than publicly described by the NRC.” Flooding is not the only extreme weather currently plaguing nuclear power plants. In the southwest, over 700 square miles of Arizona, the largest in the state’s history, and over 4,600 square miles of Texas have been consumed by wildfires. In June, the Pacheco Fire burned about 15 square miles just a few miles north of Santa Fe, New Mexico. (For more about the increasingly common wildfires in the west, see Chip Ward.)

Since Sunday, the Las Conchas fires in New Mexico have consumed nearly 95 square miles of the Santa Fe National Forest, which surrounds the Los Alamos Nuclear Facility. The fires have now reached within a few miles of the lab, which is located around 35 miles northwest of Santa Fe and 97 miles north of Albuquerque. The fires have raged for three days and firefighters have sent for reinforcements to battle a fire that, according to Los Alamos fire chief Doug Tucker, has the capacity to grow two to three times in size, as a result of erratic winds that are gusting up to 60 miles per hour.

The Los Alamos lab was set up during World War II as part of the Manhattan Project, in order to design and test the first nuclear bomb. The bombs that destroyed Hiroshima and Nagasaki were designed here. Now, approximately 20,000 55-gallon barrels containing plutonium waste are stored at Los Alamos. Los Alamos’ 11,000 residents have been evacuated. And the Los Alamos lab was closed on Monday and Tuesday. It has issued statements saying that “all hazardous and radioactive materials remain accounted for and are appropriately protected” and that there has not been release of radioactive materials. Nonetheless, some remain skeptical.

The fact that the nuclear facility rests atop a fault-line fuels concerns. On March 30, Los Alamos National Laboratory director Michael Anastasio testified to Congress, stating that he was concerned about this fact: “We will of course have to continue to work in our old facility, which right now is almost 60 years old. And it happens to be, literally, on top of an earthquake fault — not the best place for a nuclear facility. And a reminder to look at what is happening in Japan.” ( Anastasio retired on June 1, 2011.)

Environmentalists have underscored that older nuclear power plants were not built with today’s climate change-induced extreme weather in mind. The results could be disastrous. Given increased global warming, extreme weather is likely to continue.

Add global warming-related natural disasters to the already long list of concerns about nuclear power, which — as Christian Parenti has reported for the Nation — includes “a campaign to relicense and extend by 50 percent the operation of the existing fleet” of 104 nuclear reactors; and the fact that “a quarter of our reactors are leaking or have leaked radioactive carcinogenic, tritium-polluted water.”

Senators Barbara Boxer (CA-D), Sheldon Whitehouse (RI-D) and Bernard Sanders (VT-I) have called for an investigation into the nuclear safety of U.S. nuclear power plants as a result of a four-part series authored by Jeff Donn that the AP kicked off on Monday. The report affirms Parenti’s findings and shows that “government and industry have been working in tandem to keep aging reactors within the rules” and that “radioactive tritium leaks are found at 48 US nuclear sites.”

In light of these findings about the safety of U.S. nuclear safety, Fukushima and the climate change-induced natural disasters, will the United States join Germany, Italy and Switzerland in shutting down nuclear energy? Of course, in Germany and Switzerland, it was serious street heat and people pressure, or voting with one’s feet, and in Italy voting at the ballot box that led or forced politicians to shut down nuclear energy.

Tina Gerhardt’s reporting on climate change and energy policy has appeared in AlterNet, Earth Island Journal, the Nation, and other publications.