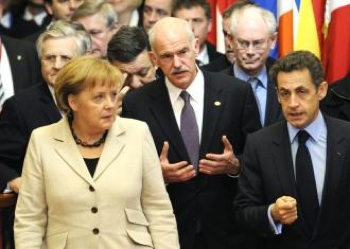 If you think the political impasse over the U.S. debt ceiling is the biggest financial threat stalking the world economy, just take a look across the Atlantic.

The eurozone crisis is reaching its climax. Greece is insolvent. Portugal and Ireland have recently seen their bonds downgraded to junk status. Spain could still lose market access as political uncertainty adds to its fiscal and financial woes. Financial pressure on Italy is now mounting.

It’s known in the financial world as a “sovereign debt crisis”–with “sovereign” referring to government bonds, such as U.S. Treasury bonds. At issue is the increasingly obvious inability of Greece and possibly other heavily indebted European governments to fully repay the debt owed on those bonds.

Bankers and conservative politicians would have us believe that the root of this debt crisis is lazy workers and a cushy welfare state. On the contrary, it’s the result of the European government bailouts of financial institutions in the crash of 2008 and the collapse in tax revenues in the months that followed. Inevitably, Europe’s smaller economies, such as Greece, suffered worst, triggering the debt crisis that burst into the open last year.

During the boom years, European banks were happy to loan money to Greece, since in the euro zone that united the participating countries on the basis of abiding by a set of criteria, a Greek government bond was supposedly just as safe as a German one. That made it possible for the banks to make greater loan elsewhere–until the financial meltdown made large amounts of those loans unpayable.

Normally, heavily indebted countries try to ease their burden by devaluing their currency, which effectively reduces the amount of foreign debt they owe. It also helps makes exports more competitive, helping revive economic growth. But because Greece is part of the euro zone, it doesn’t have that option. Instead, it has been pressured by Germany and other European Union (EU) powers to purse an “internal devaluation”–that is, dramatic cuts in wages and government spending.

In return for austerity measures that drastically affected working class living standards, Greece got a $155 billion bailout from the rest of Europe in May 2010. But the money only passed through Greek government accounts on its way back to European banks that hold Greek debt. Ireland and Portugal got a similar, if less severe, deal.

Declaring the problem solved, European leaders even created a European Financial Stability Facility, through which nearly a trillion dollars was made available to prevent any further financial panic.

Except it didn’t. The austerity package pushed through a year ago that was supposed to “restore confidence” and revive the Greek economy achieved the reverse instead. The Greek economy actually contracted as a result of the cuts in public sector wages and jobs, as well as higher taxes, while Greece’s foreign debt increased as a share of the country’s total economic output, or gross domestic product. Nor did austerity stimulate an economic revival in other economies also weighed down by debt.

In recent weeks, investors woke up to the reality that the European financial rescue was underfunded and European leaders were deadlocked over policy. There was a sudden spike in the amount that the Italian and French governments must pay in interest. This was a signal that investors are concluding that the “bailouts” of small economies will result in even higher levels of debt as deep cuts in social spending and higher taxes cause the economies to spiral downward.

To try to avert panic, European leaders have set an emergency meeting for July 21 to debate possible solutions, such as repackaging the debt with lower interest rates over longer terms to avoid a default. Because if European politicians and bureaucrats admit the obvious–that Greece and likely several other countries will never be able to repay their debts–they’d be forced to pony up hundreds of billions more in bailout money, undermining the position of even the stronger European economies.

What’s more, even a “restructuring”–a euphemism for a default–of Greek debt would force banks that hold Greek bonds to finally acknowledge losses on their balance sheets. This could trigger the collapse of several banks in a number of countries, forcing debt-ridden governments to choose between repeating the bank bailouts of 2008-09 or risking an uncontrolled unraveling of the financial system in Europe and beyond.

Martin Wolf of the Financial Times summed up the dilemma: “The euro zone, in short, is confronting a frightening sovereign debt challenge, aggravated by the dependence of its banks on support from its states and of its states on finance from its banks.

Sean Egan, president of Egan-Jones Ratings and an expert on debt, told the investment newspaper Barron’s that holders of Greek debt, for example, would get just pennies on the dollar, triggering a major banking crisis and an even greater push toward austerity:

Think of it as a bunch of political problems that are being driven by one central economic problem–the inability of Europe and its banks to handle and contain the damage sustained in the 2008 financial crisis. The resolution of this sovereign-debt crisis will remake the face of Europe over the next few years.

This is going to be one truly big story–on the scale of the instability of Germany’s Weimar Republic after World War I–and I can’t see the political will or politicians with enough clout to forge a broad consensus. Everything seems to point toward instability, leaving democracies open to strong-arm government.

Actually, the democratic governments of Europe–whether run by conservative or center-left social-democratic parties–have themselves have been all too willing to use the “strong arm” against working people who resist the austerity drive.

From the militarized confrontations of Greek police with the nonviolent mass occupation of Syntagma Square in Athens, to the Spanish riot cops who tried and failed to bust up the encampment on Plaza del Sol in Madrid, the authorities barely bother with the pretence of democracy, as bankers and bureaucrats insist on greater austerity measures to try to squeeze whatever they can out of these weaker economies.

Economist and author Michael Hudson pointed out the parallels to the austerity plans being pushed in Greece and other countries to the notorious “structural adjustment programs” pushed by the International Monetary Fund (IMF) in Latin America, Africa and Asia in the 1980s and 1990s. And it is the IMF, along with the European Union and the European Central Bank, that is part of the “troika” that is now forcing austerity in Europe itself. Hudson explains:

[The austerity program’s] logic is to subject economies to austerity and even depression, sell off public land and enterprises, and reduce living standards in the face of a sharply increasing concentration of wealth at the top of the economic pyramid. The idea is to slash government employment, lowering public-sector salaries to lead private sector wages downward, while cutting back social services.

This austerity program won’t restore the economic growth promised by its advocates. But if unchallenged, it will accelerate the already incalculable transfer of wealth from labor to capital, a process that’s taking place not just in Europe, but in the U.S. as well.Where European politicians of all stripes claim that they have no choice but to bow to the bankers and keep bondholders happy, President Barack Obama claims that the need to raise the federal debt ceiling compels him to make a deal with Republicans to carry out trillions of dollars worth of budget cuts, and even put Social Security and Medicare under the ax.

There’s no telling whether or not the euro will survive, or just what the economic and political fallout will be should it collapse. But it is already certain that the ferocious attack on working people will only intensify. The series of general strikes in Greece, limited mass strikes in Portugal and the mass walkout of public-sector workers in Britain are the precursors for even more intense class confrontations.

The same dynamics can be seen internationally. In the U.S., the mass labor protests against anti-union laws in Wisconsin gave a taste of the struggles to come here, too. Sputtering economic recovery and prolonged mass unemployment is sure to lead to even sharper attacks on working people. Even in parts of the world where the economy is booming–such as China–other economic issues, such as inflation, have sparked strikes and protests.

As the euro crisis comes to a head, it will only add to the economic and politically instability of a world still reeling from the Great Recession and its aftermath. Those who want to organize for an alternative need to prepare now to meet that challenge.