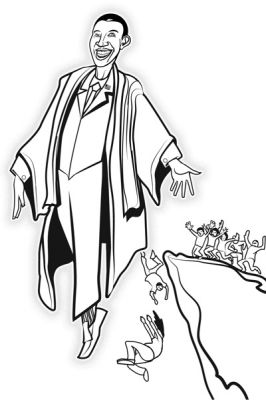 Black America is in crisis. In my neighborhood of Bed-Stuy, families live in small apartments next to empty boarded-up buildings. Cops arrest people at random to meet their quotas. Jobless teens stand on the corner. Behind these glimpses of local life is a national crisis. The NAACP reports that out of 38 million African-Americans, 15.5 percent are unemployed, twice the rate of whites. Also, 25.8 percent of black people live in poverty while 9 percent of whites do. Thousands of black families are falling into hunger, fear and homelessness.

As Black America collapses its approval rating of Obama holds at 85 percent. The worse real life gets, the more we believe in him. This faith was locked in on Nov. 4, 2008 when Obama was elected our first black president. He strode to the podium and said, “America — I have never been more hopeful than I am tonight. I promise you – we as a people will get there.” We heard an echo of Martin Luther King Jr. prophesying 40 years earlier like Moses on the mountain top, “We as a people will get to the Promised Land!”

In the Bible, after Moses died it was Joshua who led the Hebrews into the Promised Land. He destroyed the Canaanites and divided the land among the tribes. Since the mass conversion of black people to Christianity during slavery, the Exodus myth is one of the grand narratives into which Black America fit its own history. On election night, in an act of group transference, we relived our past in the present. Obama was our Joshua and we were coming home.

In psycho-analysis the projection of unconscious desires onto another and re-enacting old scenes in the present is called transference. In therapy, patients bring repressed emotions to the surface in order to act out a forgotten scene. The healing revelation comes as they realize who they’re talking to is not in front of them but inside them.

Transference happens not just in therapy but in the voting booth. Black America can no longer see beyond Obama because it still sees itself in Obama.  During the 2008 presidential election, Black America projected its repressed desire to be free onto a man who could not fulfill it. Now we are unable to have the revelation that what we saw in Obama was actually within ourselves. Until we do, the black working-class, the jobless, homeless, former convicts or unemployed college graduates will not become a militant political force to challenge the Obama administration, the Tea Party and its own middle-class.

RACE AS A SOCIAL CONSTRUCTION
Overlooking the election-night festivals, CNN analyst David Gergen framed Obama’s victory as the last scene of King’s uncompleted life. “This is the Joshua Generation,” he said, “We can reach something we never thought we could reach 40 years ago.”

But just a year before, no one thought of Obama as Joshua, he wasn’t even black enough for many whereas Hillary Clinton was the wife of the first “black” president. Her husband, former president Bill Clinton bragged of growing up poor in the South, seeing it desegregated and filled his cabinet with black officials. Toni Morrison said, “This is our first black President. Blacker than any actual black person who could ever be elected in our children’s lifetime.”

Loyalty to Clinton spilled over to his wife and in contrast Obama looked like an interloper. His “blackness” was questioned in newspapers, barber-shops and churches. Driving it was the fear that placing hope into him would end in bitterness or worse — his assassination. Blacks supported Clinton over Obama by 57 to 33 percent. But then in January 2008, Obama won mostly white Iowa and Black America saw him as a real vehicle for its political desire and an emotional transference began.

In 2008 as Obama surged in polls and delegate counts he went from being a blank candidate to a black one. His skin-color, his progressive rhetoric transformed him but most of all were the racist attacks. During the primaries, Hillary Clinton appealed to “hard-working white Americans” and later speculated about Obama’s assassination.

Minorities have a prejudice-radar and it blipped. As Black America’s loyalty drained from her, it transferred to him.

After the primaries, Republicans pictured Obama as Osama. Black America saw the attacks on him were really attacks on them and encircled him. As we inched closer to election panic and hope shot through us. Obama had a messianic glow as if he was part of a larger story. A desire began to surface from the gut. It was a desire buried in the body because living in a racist society is like living at the bottom of the ocean, one moves under the weight of millions of tons of hate. And the one simple need is to swim to the surface and simply breathe.

The need to breathe free began when 11 million Africans were stolen and shipped to the New World. Two million people died, tossed into the dark waters where sharks tore them into clouds of blood. The survivors worked in hot fields, had children who grew and had children themselves and with each cycle of life the memory of home lost.

But in the Exodus myth, black people found a grand-narrative of a God who frees his people and guides them home. Mass slave conversions to Christianity were first noted in 1760. Southern white preachers used the Bible to promote obedience but after official services, slaves met in the woods to sing of Moses and God’s deliverance of the Jews from Egyptian slavery.

It was a hope often hidden because it’s the most vulnerable part of one’s soul. And every time this wild hope surfaced it seemed KKK terrorists or white police or white FBI or a white assassin’s bullets or closing factories or crack pipes glowing like fireflies in empty buildings or black poverty pimps would kill it again.

But on election night, millions cheered at what we believed was the climax of the centuries-long Exodus; a black man, president of the most powerful nation on Earth would finally guide us home, let us breathe. Rev. Jesse Jackson, who saw King shot in the throat and hugged the man’s bloody shirt to his chest, 40 years later wept openly as Obama stepped to the podium to claim his victory.

THE MAKING OF AN ICON
In the space of a few years, Obama was transformed from an obscure Illinois state senator to a man who appeared on posters in barber shops alongside Malcolm X, Rosa Parks and Martin Luther King Jr. It was not “natural” but done through a corporate political campaign that tapped into a huge social reservoir of frustrated desire. It was a massive group transference that set him as Joshua.

During the campaign, Obama repeatedly tapped into this grand-narrative. In 2007 he spoke at a historic black church in Selma, Alabama, “The previous generation, the Moses generation, took us 90 percent of the way there. We still got that 10 percent in order to cross over to the other side. The question I have is what’s called of us in this Joshua generation?”

Since Obama is our Joshua, there is reluctance in Black America to critique him or withhold support. When I ask my neighbors, “What do you think of Obama?” they reply with variations on a theme. “He’s doing the best he can” or “The Republicans got him in a corner” or “He can’t go all out. They’ll kill him.” Of course behind these answers is a very real political calculation: who else is there to vote for? Newt Gingrich? Mitt Romney? But the point is not that Black America should vote Republican. It’s that under Republican administrations people were ready to fight.

Obama is not Joshua leading us to conquer the Canaanites; he is a Canaanite. It’s as if he led us around the city of Jericho, promising that if we yelled “Yes We Can!” in one great voice the walls would collapse. But as we circled the city, he left to go inside and never came back. And Black America keeps circling, lost in the desert.