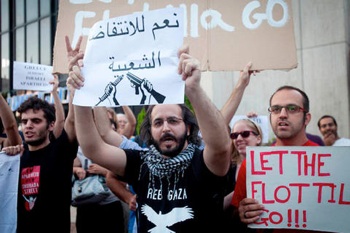 When Andreas Papandreou died in 1996, The New York Times noted that he often left Western governments “befuddled or exasperated” as he took positions “diametrically opposed to theirs.” Citing examples of his “maverick” behavior, the paper’s obituary referred to how the Greek prime minister granted diplomatic status to the Palestine Liberation Organization in 1981, the year he first took office (“Andreas Papandreou, Greek leftist who admired and annoyed US dies at 77,” 24 June 1996).

Like most political leaders, Papandreou was a man of contradictions. He professed to despise American imperialism, while allowing the United States retain military bases on Greek soil. Yet he deserves some posthumous acclaim for saluting the PLO when it was still a genuine resistance movement and for criticizing Israel more trenchantly than any of his counterparts in the then European Community.

In recent times, the current Greek premier George Papandreou has acted as if he wishes to totally negate his father’s legacy. No doubt, Greece’s refusal to allow the Freedom Flotilla II to set sail for Gaza was partly the result of pressure — and possibly even financial blackmail — from the US and Israel. Nonetheless, it was not an isolated occurrence but the logical consequence of a process that was already underway.

In July 2010, Papandreou junior visited Israel barely one month after the assault on the Mavi Marmara, in which nine Turkish peace activists (one also a US citizen) were murdered by Israeli forces. As an immediate response to that massacre, Greece called a halt to a joint military training exercise then being undertaken with Israel off the island of Crete (“World in shock at deadly Gaza ship raid,” Ynet, 31 May 2010). But Papandreou had no qualms about going ahead with his trip to Israel as planned.

It is not known whether the two men discussed how the Leviathan gas field — the source of the energy on Netanyahu’s radar screen at the time — is located off the Lebanese coast and how Israel’s exploitation of its reserves could spark a new conflict with Lebanon (“Gas field threatens fresh Lebanon-Israel dispute,” The Financial Times, 16 July 2010).

It is known, however, that both Israel and Greece continue to strengthen their military cooperation. The operation that was stopped at the time of the Mavi Marmara bloodbath, codenamed Minoas 2010, was in fact resumed in October last year. US-manufactured Apache and Black Hawk helicopters were used in the exercise, which tested out landing and take-off procedures in mountainous areas and under several different weather conditions (“Greece, Israel wind up military exercise,” Huerriyet, 15 October 2010).

In December, Flight International stated that there had been at least four such exercises between Greece and Israel over the preceding few months (“Israel steps up Greek training activities,” Flight International, 6 December 2010). This year, Greece joined Noble Dina, a decade-old US-Israeli anti-submarine exercise for the first time. The exercise took place between the island of Megisti and Haifa, a port city in Israel with a considerable Palestinian population (see note from US Navy’s Military Sealift Command, June 2011).

Friction between Greece’s historic foe Turkey and Israel have almost certainly helped the Netanyahu-Papandreou relationship to blossom. Papandreou is surely an astute enough politician to have scented an opportunity for Greece to replace Turkey as Israel’s most valued ally in the Mediterranean. The similarities in the men’s backgrounds could well be another factor. Both were educated at highly-regarded universities in the US (Papandreou at Harvard, Netanyahu at the Massachusetts Institute of Technology) and despite heading parties that are nominally different in ethos, both are heavily influenced by US politics and culture.

Perhaps more significantly, the recent intensification of relations has followed several years where the two countries have worked alongside each other under the umbrella of NATO. That US-dominated alliance has formed a ring around the entire Mediterranean. Almost every country bordering that sea is either a full member of NATO or has signed up to its Orwellian-titled Partnership for Peace.

Even though there appears to be no imminent prospect of Israel joining NATO, its ties to the alliance have grown exponentially over the past decade. An Israeli-NATO agreement on sharing intelligence was signed in April 2001. Five years later, Israel reached agreement on implementing an “individual cooperation program” with NATO. Updated in December 2008, the agreement paved the way for a high number of joint operations between it and the alliance. Greece has been involved too in most, if not all, of these operations. In 2007, for example, Greek warships took part in drills in Eilat, a port in Israel on the Red Sea (“Israel: Global NATO’s 29th Member,” OpEdNews, 22 January 2010).

Both Greece and Israel are also participating in Active Endeavor, a NATO-coordinated exercise under which ships patrol the Mediterranean. That operation was, according to the official narrative, launched in response to the 11 September 2001 atrocities in the US. But in practice its remit has expanded beyond keeping a watch out for potential “terrorist” activity on the waves. In particular, it has been used as part of a repressive agenda of helping prevent foreigners who seek to flee poverty from reaching Europe (“Active Endeavor ships assist Greece in illegal immigration operation,” NATO statement, 25 March 2006).

In March, Active Endeavor’s scope was further broadened during preparations for the war against Libya. A 24-hour airborne surveillance system was put in place as part of the ongoing operation (“NATO increases airborne surveillance in the Mediterranean,” NATO statement, 9 March 2011). Despite its severe economic problems, Greece has provided a number of warplanes and ships to that war effort, in which NATO has availed of at least seven Greek airfields (“NATO Operation Unified Protector against Libya making use of Greek Bases in Crete, the Peloponnese,” BalkanAnalysis, 31 March 2011).

Meanwhile, the solidity of Israel’s links to NATO were underscored shortly before Gabi Ashkenazi stepped down as head of the Israeli military in February. Ashkenazi — who oversaw Operation Cast Lead in winter 2008-09, during which more than 1,400 Palestinians in Gaza were killed — advised NATO strategists on what tactics should be used against Afghanistan. He was also treated to a farewell dinner in his honor at the Brussels residence of Giampaolo Di Paolo, chairman of NATO’s military committee (“Security challenges to be addressed by Lt Gen Ashkenazi at NATO conference,” Israeli military statement, 25 January 2011).

On a proportionate basis, Greece is one of Europe’s largest spenders on the military, although this expenditure is being cut as part of a wider austerity drive that mainly affects vital public services. In 2009, Greece allocated 2.54 percent of its gross domestic product to military spending, the highest level in the European Union. Britain was next at 2.53 percent (“Defense spending of EDA participating states in 2009,” European Defense Agency, 31 March 2011).

Greece is known to have concluded deals with several Israeli weapons makers, although it has not published comprehensive details on such deals. In February, Evangelos Venizelos, the Greek defense minister, confirmed that “precision-guided” weapon kits known as SPICES (Smart Precise Impact and Cost Effective) were being bought from the Israeli company Rafael (“Greece adds SPICE to air force,” Jane’s Defence Weekly, 10 February 2011). Elisra, a subsidiary of the leading Israeli arms manufacturer Elbit, has also supplied electronic warfare systems to the Greek air force over the past decade (“Greece to buy Elisra EW systems,” Globes, 6 January 2003).

It is true that Greece has combined its ever-tightening embrace of Israel with calls for the blockade of Gaza to be lifted (“Foreign ministry announcement regarding the intention of Greek citizens to participate in a flotilla that will attempt to break the Gaza blockade,” statement from Greek Ministry for Foreign Affairs, 22 June 2011). But it is impossible to take those calls seriously now that the Athens government has assisted Israel in hindering protest against the very same blockade.

Andreas Papandreou’s championing of Palestinian rights might have had some moral weight in the early 1980s. Three decades on, his son George has become a craven accomplice in maintaining the Israeli occupation.

This article was originally published on ElectronicIntifada.net.