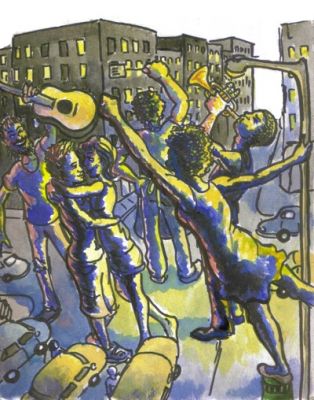 When I moved to the city almost 15 years ago, a friend told me, “New Yorkers do everything in public. We eat, hang out, dance, hold meetings, even have sex in public.” Yet, these practices are compromised by life in the neoliberal city.

Back in the mid-90s, Giuliani attacked community gardens, taxi drivers, pot smokers and sex shops. He seemed to be targeting sites of difference itself. Convivial spaces where people built culture, performed or created community were assaulted by the city’s use of petty regulations like archaic laws against dancing, minor health-code violations and nuisance ordinances. Much of the pulsing nightlife of generations past was threatened by attacks on semi-public spaces. Those who did not pay off the NYPD were often raided or shutdown.

The war on public life continues today. Restaurants increasingly creep into public plazas where they charge the public to sit there. Police restrict park access for vendors to those with expensive permits, and require groups of 50 or more to get permits or face arrest. Recently, the NYPD and media have been labeling street youth who build community in public spaces in the West Village “criminals” and “drug dealers.”

Nonetheless, many New Yorkers continue to invigorate public life through tactics ranging from street music, roving parties and flash mobs to the persistence of critical mass bicycle rides, Bloombergville and unpermitted parades. They are part of a generations-long movement to fight the privatization of public space by reclaiming the streets of cities around the world.

Benjamin Shepard, Ph.D., is the co-author with Greg Smithsimon, of The Beach Beneath the Street: Contesting New York’s Public Spaces.