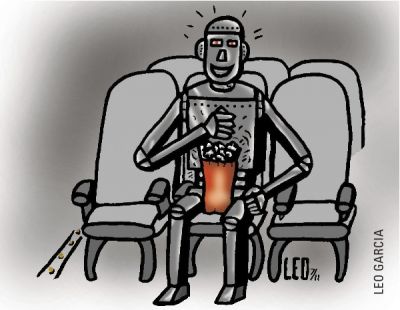 Director Michael Bay films a woman prancing up the stairs and cooing to a guy in bed, “My hero needs to wake up.” The next two and half hours of screen time, cars and jets transform into robots and blast Chicago into a shooting gallery. Welcome to Transformers 3: Dark of the Moon — a dumb, loud movie which would be forgivable if it was only stupid.

A closer look reveals the film is a sexist, racist, nationalist Pentagon commercial that feeds off of male anxiety. It promotes vitality through war and reaffirms white supremacy. It uses women as tokens of male potency. It universalizes American foreign policy. And it just plain sucks. But is the film’s over-the-top military masculinity related to the impotency of its male audience? Is Transformers 3 a form of Hollywood Viagra?

The first goal of a narrative is to have the audience identify with the protagonist. When we first see Sam Witwicky played by Shia LeBeouf, he is out of work, a recent college graduate who is given lunch money by his girlfriend. He goes on job interviews and is repeatedly denied. The character mirrors a larger national anxiety. According to a June New York Times/CBS poll done in June, four in ten Americans think the United States is in a permanent economic decline. Young men in the theaters see themselves reflected in Witwicky, the fidgety, motor- mouthed, underemployed underdog.

And when he does land a job, he drives a creaky jalopy to his girlfriend’s office where her oily boss Dylan Gould gives them a tour of his antique cars. The boss, played by a smug Patrick Dempsey, tells him it was his phone call that got Witwicky the job. It is a telling moment of class tension that reflects the in- creasing power the wealthy have over us.

Witwicky is attacked by a vulture-like Decepticon and sure enough, he learns that evil robots are planning to again seize the planet and enslave humanity. He transforms from mundane paper-pusher to global savior and rejoins his Autobot allies. His male anxiety of being impotent is released into a cathartic fight against the enemy. Running to war he tells his girlfriend, “I just want to matter.”

The troubling thing is how that enemy is imagined. When you look closely the Autobots aren’t aliens, they’re Americans. They act out American foreign policy by blasting a secret Middle Eastern nuclear plant, which obviously stands in for Iran. Decepticons aren’t aliens, they’re Arab, African or wild animals. We first see Megatron, the Decepticon master-villain, as a refugee-terrorist in the North African desert with, hold your breath, a rag on his head. He growls orders as robot flies crawl over him. I almost howled in the theater at the racism. Mega- tron is a “rag-head.”

Almost every Decepticon is ethnic. In the first battle scene, Decepticons chase the Autobots on the highway. One has dreadlocks and runs like an enraged Bob Marley. They drool and growl like metallic wolves. They are uniformly black.

And yet the subliminal racism is concealed by a surface layer of militaristic racial integration. Black men are valued only as comrades in arms. Black women don’t exist in this world. The one Latina is a stereotypical hurricane of Spanish who wears a “hoochie-outfit” and is called a Latin melt- down. The one good woman in the camera’s gaze is Witwicky’s girlfriend Carly Spencer played by English model Rosie Huntington-Whitely. She’s not just white, she’s Anglo-Saxon white, blazingly white, original white. She is so white that after running through a giant alien robot war that turned downtown Chicago into grimy rubble; her face and her clothes are still white.

Her beauty is often studied in slow motion as are the Transformer acts of violence. Slow motion is cinema’s money-shot because it is when the narrative tension between characters is released in sexual display or graphic brutality. As the movie plods on the major villains are killed by the Autobot leader Optimus Prime in gruesome scenes of robot decapitation. At the end Witwicky also gets his hands dirty by killing the rival for his girlfriend, the oily, double-crossing Gould. In Bay’s world, war answers everything. It’s as if the film was directed by German proto-Nazi Ernst Junger.

Hollywood teaches male audiences that war cures anxiety and the enemy is not only wrong but often is not even human. With every Hollywood movie that glorifies war and military hardware, our nation is nudged a degree closer to fascism. Transformers 3: Dark of the Moon has aroused millions of movie goers with the spectacle of violent death, each killing of the “ethnic other” is a visual pill that like Viagra helps the citizens of a declining empire to “get it up.”