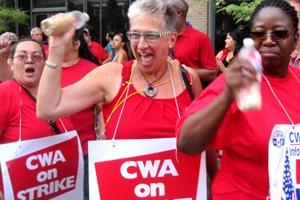 Outside Verizon’s lower Manhattan headquarters, crowds of nearly 200 strikers are camped out -many of them with their whole families, as construction workers from the World Trade Center site next store are coming by to wish them luck. Some strikers are listening to union officers give speeches on bull horns when someone motions that the replacement workers are coming back from their lunch break. The crowd turned to a woman walking toward the building’s only entrance, and cries of “scab” pierced the air.

The company is fighting back vigorously. A Manhattan judge recently ruled that only a specified number of strikers can picket a company site—between six and 50 depending on the size of the location, pubic radio reported.

Workers at the telecom giant, which has had many different names since the birth of the “Baby Bells” in 1984, have been on the picket line before, such as in the four-month long strike of 1989 at the predecessor company, NYNEX. But the current action — 45,000 members of the Communications Workers of America and the International Brotherhood of Electrical Workers from New England to Virginia walked off the job August 7 – comes at a critical moment.

While union membership in general has been in decline for the last 30 years, it’s dwindled to a meager 7 percent in the private sector. Off-shoring practices and a legal environment that makes new organizing next to impossible have combined with the tough economic times to reduce union membership in sectors where it was strongest, like manufacturing and transport. Workers like these are some of the last hold-outs of the blue-collar middle class in America. After governors from across the country have waged war on their public sector siblings this past year, such a strike at a high profile company that is so profitable yet asking for extreme worker concessions is another fight that unions hope could become high-profile enough to get attention around the country. Yet, unions struggled to turn the national media coverage of the Wisconsin protests into electoral victories: the public may not be ready to support labor.

A year ago CWA leaders told its members to prepare for a strike. The company demanded $1 billion in concessions–$20,000 per worker–that includes cuts to health care, a reduction in leave benefits and the elimination of pensions for new workers. CWA District 1 Vice President Chris Shelton said that the company was also demanding retirees pay $6,000 annually for their medical benefits “after they made promises that it would be free.” This, union leaders point out, is despite a $19 billion in the past four years. Verizon’s argument is that all of the profits come from the non-union wireless operation, while the unionized wireline end is a bulky, money-losing dinosaur.

Wireline maintenance is actually the backbone of the wireless service. Cell phone carriers, Verizon and other companies, use the copper infrastructure built and maintained by union workers. That same network also supports landlines for businesses, which still rely on them, and alarm systems for offices and homes. “AT & T, MetroPCS, they lease it from us,” says Mike Nixon, who has worked as a field technician with the company for 23 years. “Verizon profits no matter what.”

The strikers say its about corporate greed, In fact, Verizon started a new venture–Verizon Wireless–when it went into the cell phone business in order to avoid the new workforce from automatically being fed into the bargaining unit. A 2007 report by American Rights at Work said Verizon has “maintained non-union divisions by interfering with its employees’ freedom of association” even though the company “could choose a high-road model of investing in its employees and still compete in a rapidly changing industry.”

The feeling that America’s richest are taking from the rest of us is a common one. That’s especially true after the abysmal debt-ceiling deal in which Republican House Speaker John Boehner boasted of getting 98 percent of his demands that relied entirely on cutting programs and not at all on raising new revenue from taxing the wealthiest. The public doesn’t see unions as the natural counterpart to big business, however. Skepticism of unions still remains strong; in 2008 and 2009, blame was heaped on auto workers during the Big Three bail out.  The CWA hopes that changes with Verizon. Shelton said he was getting hundreds of emails a day from non-union workers in support of the strike. More inspiring, he added, was that CWA picketers have been protesting outside Verizon Wireless stores, and on several occasions, the low-wage retail workers at these locations greet the protesters and inquire about how they can join the union.

“People are angry,” says Kate Bronfenbrenner, the director of Labor Education Research at Cornell University’s School for Industrial and Labor Relations. Wisconsin Governor Scott Walker’s decision to take on public sector workers’ bargaining rights did ignite a local and national backlash in defense of unions. At least in New York, CWA has been successful in its strikes against the phone company in the past. In 1989 it fought off cuts to health-care benefits, and later secured work breaks for members, Bronfenbrenner says.

Of course unions in Wisconsin thought they were at a turning point, but the Republicans kept their majority in the State Senate by winning four of the six recall elections Tuesday. The people are a long way from rushing to sign their cards. But when Verizon service is eventually slowed by the strike, more and more people will pay attention. Few are likely to be sympathetic with Verizon.