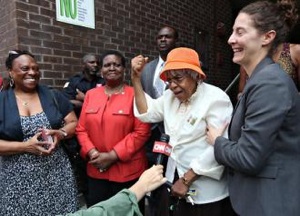 More than 200 community members, activists and supporters blockaded Mary Lee Ward’s home in the Bedford-Stuyvesant neighborhood of Brooklyn on August 19 to prevent an eviction of the 82-year-old African American grandmother.

The city marshal never showed up, and the intervention of a city councilwoman got the developer and Ward to a negotiating table. But activists with Organizing for Occupation, who put together the defense, remain wary that not all is settled at 320 Tompkins Ave.

Demonstrators gathered in the early morning, some with banners that read, “We stand with Ms. Ward,” “Defend the block” and “Evict Speculators, Not Grandmothers.” Bus drivers, truck drivers and individuals in cars honked their support as the protest swelled to take up both sides of the street.

Community members brought out chairs and children, waiting to confront the police should, they show up. There was a palpable sense of anger at the audacity of the eviction, especially from members of the community, who know Mary Lee Ward from her 44 years of residence there. “You have to stick with it when you know you’re right,” Ward told the crowd. “Don’t let nobody walk all over you.”

Two years after this deal, the government shut down Delta Funding for preying on thousands of elderly people of color in Queens and Brooklyn by convincing them to take out loans they couldn’t afford.

Ward’s broker lost his license and was prosecuted for fraud. Yet her loan lived on. It was sold by different financial institutions over the course of 10 years, and ballooned to $200,000. Ward, who is retired and lives on Social Security, couldn’t make the payments.

In 2008, a speculative real estate developer bought the home in an auction as an asset in the now-gentrifying neighborhood. The speculators scheduled for marshals to take full ownership of the property on Friday. But they were sadly mistaken if they thought they could come in and take Ward’s home without a fight.

“I live in this neighborhood, and low-income neighborhoods are frequently targeted by these speculators, especially longtime residents,” said Sukjong Hong, who was at the blockade. “We should be standing together to fight these foreclosures–we need a larger movement that can stand up to these bankers and landlords. Everyone knows housing is a human right.”

Robert Paschall attended the protest in solidarity. Paschall was evicted in 2008 and has been in a court battle ever since. He, too, was a victim of predatory lending.

“She shouldn’t be evicted. The court system has failed me and her and the community,” he said. “I lived in my home for 25 years, and because of a predatory scam, my family is broke up, having to go into shelters. It goes back to the courts and lawyers profiting from these evictions.”

But, after seeing this protest, Paschall added, “This is a new day. Everything needs changing.”