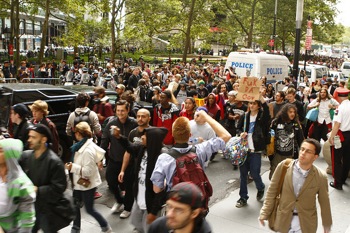 When more than a thousand protesters marched on Saturday from Bowling Green, near the southern tip of Manhattan, toward the backup meeting point marked “2″ on their maps, they thought they were going to a place called Zuccotti Park, several blocks north of Wall Street on Broadway. That’s what it said on the map. It’s now a private park, owned by Brookfield Properties, but it hasn’t always been its name. Before being renamed after Brookfield’s chairman, John Zuccotti, it was called Liberty Plaza. Going there was a last-minute decision on the part of the group’s Tactics Committee, and it was one with significance. Tahrir in Arabic, after all, means “liberty.” Though with fewer people than the historic protests in Cairo this winter, Tahrir has come to the United States, at least in name.Here, under the light canopy of trees that obscures the office buildings looming overhead, several hundred people have remained since Saturday afternoon. They’ve been making signs, collecting thousands of dollars’ worth of pizza delivery, playing music, collecting trash, laying down sleeping bags and cardboard to sleep on, and running a media center on a generator and their own wi-fi hotspot. After briefly surrounding the park on Saturday night, the police presence—at least in view—has been relatively light.

Sunday, the protesters kept busy. They conducted a large, loud march around the Financial District. They managed a divisive confrontation with the police about an order to remove signs from the walls. But, mostly, they assembled and debated. There were several hours of General Assembly meetings in the morning, and then an extended debate—from mid-afternoon until late at night—largely about what the plan of action would be for Monday, the first business day of the occupation, when the area’s population would turn from tourists grazing for photogenic spectacles to those who come to do the very business that this occupation is meant to transform, or stop entirely.

Early in the afternoon, it seemed that the chilly first night had taken its toll. Numbers in Freedom Plaza were lower than they were the evening before, and those still around sang redemption songs a little behind the beat, intently read texts of significance, or simply sat and waited. But as the day edged toward evening, the some previous day’s energy returned, as did an influx of new people who’d heard about the occupation on the news or from friends—up to two or three hundred. Pizza kept arriving through the night. As I write, a small group is returning from a candlelight vigil by the barricades still surrounding the blocks around the Stock Exchange. Others are trying to confirm rumors of police agents in their midst.

The debate that took up so much of the day was over whether to move as a group onto Wall Street on Monday morning and attempt to hold it, or whether to remain in their Liberty Plaza. Many expressed worry that there were still too few of them, that the authorities easily be able to contain them, and that they should hold their ground, refine their demands, and focus on welcoming more into the movement. (After all, as many as 20,000 demonstrated on Wall Street on May 12, and even then revolution was hardly imminent.) Others were growing impatient and insisted that they had come to #occupywallstreet, not sit around in a park. Loud chants to “Occupy Wall Street!” echoed among the buildings.

The decision that the Assembly finally reached was a compromise. Part of the group will stay in the park and hold it. Others, especially those willing to risk arrest, will go to Wall Street in the morning in time for the Stock Exchange’s opening bell.

Most in the park are too busy settling in to notice the police cars taking position around them for the night. Some are getting ready to move tomorrow. But others here see Liberty Plaza as a victory in itself. Because of their presence, the streets around the Stock Exchange have been blocked all weekend. “Wall Street is already occupied,” one woman said in the Assembly. “We’ve already achieved our objective.”

This article originally published on WagingNonviolence.org.