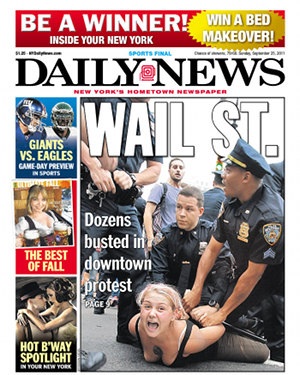 A bit after 10 p.m. on Saturday night in occupied Liberty Plaza, there was a celebration around the media tables. Photocopied facsimiles of Sunday’s New York Daily News were being passed around and photographed. After having held the plaza with hundreds of protesters at any given time for a week, and having kept the blocks surrounding the Stock Exchange barricaded by police all the while, the protest was finally getting serious news coverage.“The Daily News!” I heard someone say on the plaza. “It’s because this is a sustained occupation.”

Exclaimed one of those doing media relations, “We’ve already won!”

Just a few hours earlier, it seemed certain that a full-on police dispersal would come that night. Contingency plans were being discussed by the protesters’ General Assembly. But now the Daily News cover and the presence of TV vans seemed like guardian angels, ensuring that they’d make it until morning.

So what occasioned the media’s sudden interest? To what do these protesters, who purport to represent “the 99 percent” of Americans disenfranchised by a corrupt corporate and political elite, owe these headlines?

Marking the one-week anniversary of the beginning of the occupation, a large march was planned for noon on Saturday. Several hundred marchers paraded around the plaza to their favorite chant, “All Day, All Week! Occupy Wall Street!” They then headed down to the Wall Street area, where police arrested several of them, including filmmaker Marisa Holmes. From there, the march continued up to Union Square, two and a half miles north. It arrived there, then turned south again toward Liberty Plaza. Around 3 p.m., near Fifth Avenue and 12th Street, the police attacked. Unrolling plastic orange barriers, they isolated a crowd of marchers, along with the reporters following them, and began mass arrests for blocking traffic. This was a brutal process. Caught on cameras were scenes of one protester being dragged by her hair, others being slammed into the pavement, and a group of women, netted and helpless, being downed by pepper spray. In total, police say they arrested 80 people. With not enough room for them in vans, many were taken away in regular city buses. The march thereafter dispersed, and those who weren’t arrested made their way back to Liberty Plaza.

In an article that recounts as many gory details as will fit, the Daily News devotes only two short paragraphs to what the protest is actually about and what protesters have been doing all this time: “attempting to draw attention to what they believe is a dysfunctional economic system that unfairly benefits corporations and the mega-rich.” True, but too little. The real story for the Daily News, it seems, is not this unusual kind of protest, or the political situation which it opposes, but the chance to have the word “busted” on the cover next to the cleavage of a woman crying out in pain.

ABC’s Channel 7 Eyewitness News, despite being one of the day’s most zealously-persistent outlets, ran a doubly fallacious headline Sunday morning: “Occupy Wall Street Protest Gets Violent Overnight.” For one thing, the protest itself did not get violent. Protesters attacked nobody. They threw no stones, they carried no weapons. The police got violent. Secondly, the arrests and violence did not happen “overnight” but during the day—an error the article repeats several times. This seems especially odd since the Channel 7 reporter and cameraman were witnesses to what did happen during the night, which their article confusingly splices in with an account of the day’s arrests: a mainly silent, completely peaceful vigil march on the sidewalk to Police Plaza to ask after the protesters arrested that afternoon—with locked arms and peace signs held high—accompanied the whole time by officers carrying orange nets, followed menacingly by empty police vans, and barricaded several times from reaching their destination.

While protesters were stopped at a barricade at Canal and Elizabeth Streets, Channel 7 reporter Darla Miles showed the picture of a protester with his face covered in blood on her Blackberry to help persuade the police to give an update on him. (She was careful to keep it away from the cameras of those who might be able to help publicize it: “Channel 7 News property!”) But  they were gone by the time the protesters finally made it near Police Plaza, calling out in unison, “Our Brothers! And Sisters! You Are Not Forgotten!” as well as the phone number of the National Lawyers Guild, eliciting some chuckles from the police.

Soberer outlets missed the point as well. What the Associated Press and Reuters saw was something along the lines of a typical one-day march-in-the-streets protest, only mysteriously happening over more than a single day. They barely mention the sustained occupation of Liberty Plaza, much less what has been happening there and why. The New York Times’s Ginia Bellafante at least took the time to visit the plaza, though she doesn’t seem to have stayed long enough to notice its main activity, the General Assembly. There, she would have found that the protesters’ purpose is anything but “impossible to decipher”; they’re busy taking part in a purposely-leaderless, consensus-based process based on people, not money, right in the capital of American corruption.

None of these articles captures what is distinctive about this occupation, or how it works, or what the protesters are doing for most of the day, or the courage they have shown in the face of the brutality. These are common oversights in press coverage of nonviolent resistance movements, but that doesn’t mean there’s any excuse.

The thing is, there are tremendous things happening in and around Liberty Plaza, stories in which these mainly-young protesters are anything but passive recipients of police abuse. I’ve already written about the arrests of protesters like Jason Ahmadi and Justin Wedes, who were also portrayed as victims in the media, but who in fact were arrested on their own terms, for simple, peaceful acts of resistance. One could also speak of the stories of how those arrested on Saturday kept each other’s spirits high by singing and chanting together and trying to woo the police while they were being taken away in plastic cuffs. Watch, for instance, between 1:25 to 3:15 on this clip from the occupation’s 24-hour livestream:

There’s a story, too, in the wake of every arrest or other shocking incident, when the protesters’ habitual response is not despair (at least for long), but dialogue: a meeting. It’s a story I still haven’t seen in mainstream reports, yet it goes straight to the heart of what the protest is about.

I also think of things that happened before major news outlets were paying much attention, at times when the watchful crowds were away. At about 9:15 p.m. on Sunday the 18th, for instance, came one of the first police incursions into the plaza, during a General Assembly meeting. I have yet to see it recounted anywhere. The officers ordered, through protesters reporting to the Assembly, that all signs be taken down. There was a fractious reaction at first. Some thought it a reasonable request and wanted to comply. Others refused on principle, not wanting to be taking orders from the police. People made speeches on either side. There were defiant chants of “Occupy Wall Street!” Some took it upon themselves to remove signs, and others tried to stop them, such as by shouting. There were whispers that undercover cops were sowing divisions—though it hardly seemed like the protesters needed any help with that. Just when unity was needed, it wasn’t there. Officers started taking down posters themselves while protesters chanted, “Shame!”

The focal point of it all became a spot in the middle of the eastern edge of the plaza, along Broadway. Several protesters—men and women, young and older—decided to sit down there in front of a Socialist Workers Party poster (whose affiliation has since been stripped from it) that says, “A JOB IS A RIGHT! CAPITALISM DOESN’T WORK.” Others tried to get them to move, but they wouldn’t. The police didn’t move them either. Their willingness to sacrifice, it seems, solved the problem. There were no gory arrests. The sign remained as long as they did, police and fellow protesters withdrew, and the meeting continued.

Events like these are messy, and they’re far from entirely flattering, but they’re human. Properly told, they have the makings of a good story. Reporting accurately and critically on police violence is of course essential—Colin Moynihan of The New York Times has done so extremely well on the paper’s City Room blog—but that is only a small part of the story of what’s going on here. We in the press need to think more highly of our readers, as well as of our own ability to report on stories that don’t depend simply on the shock value of violence, or on cheap-shot ridicule, or on stifling formulas. For many Americans, nonviolent direct actions like this occupation are the best hope for having a political voice, and they deserve to be taken seriously as such.