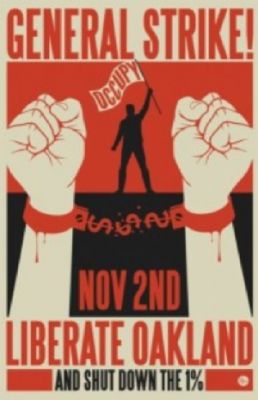 On September 17, the first day of Occupy Wall Street, one of the many scattershot ideas proposed in the first General Assembly meeting was a call for a general strike. It struck me at the time as one of the most important, but also least feasible, things anybody had suggested—most important, because a civil resistance movement won’t really work unless it manages to mobilize millions of people in ways that would truly undermine the bases of the U.S. economy; least feasible, because at the time Occupy Wall Street was still just a few hundred people hanging around precariously in a park, surrounded by police and unnoticed by the mainstream media. The latter has changed. The first has not.Last Wednesday, in the wake of the previous day’s violent police crackdown, Occupy Oakland voted to call a general strike in the city for this Wednesday, November 2. According to the approved proposal, “All banks and corporations should close down for the day or we will march on them.” Plans have also been announced to march to Oakland’s port on the 2nd to close it before the night shift begins. This comes amidst an outpouring of sympathy for Occupy Oakland from around the country, especially after former Marine and Iraq War veteran Scott Olsen’s skull was fractured by a police projectile.

Even so, a general strike, even in just one city, is a very ambitious goal. Few have ever been accomplished in the United States, and no one has in recent memory. Are the occupiers really up to it?

Oakland, at least, is a good place to start. It was home to what appears to be the United States’ last general strike, in 1946. It was even more sudden than the one the occupiers have called, arising spontaneously in reaction to an attempt to break a strike of department store clerks. Here’s one colorful account of how it began:

Shortly before 5 a.m., Monday, December 3, 1946, the hundreds of workers passing through downtown Oakland on their way to work became witness to the police herding a fleet of scab trucks through the downtown area. The trucks contained commodities to fill the shelves of two major department stores whose clerks (mostly women) had long been on strike. The witnesses, that is, truck drivers, bus and streetcar operators and passengers, got off their vehicles and did not return. The city filled with workers, they milled about in the city’s core for several hours and then organised themselves.

By nightfall the strikers had instructed all stores except pharmacies and food markets to shut down, Bars were allowed to stay open, but they could serve only beer and had to put their juke boxes out on the sidewalk to play at full volume and no charge. “Pistol Packin’ Mama, Lay That Pistol Down,” the number one hit, echoed off all the buildings. That first 24-hour period of the 54-hour strike had a carnival spirit. A mass of couples danced in the streets. The participants were making history, knew it, and were having fun. By Tuesday morning they had cordoned off the central city and were directing traffic. Anyone could leave, but only those with passports (union cards) could get in. The comment made by a prominent national network newscaster, that ‘Oakland is a ghost town tonight,’ was a contribution to ignorance. Never before or since had Oakland been so alive and happy for the majority of the population. It was a town of law and order. In that city of over a quarter mil lion, strangers passed each other on the street and did not have fear, but the opposite.

According to that same account, though, the 1946 strike was part of a national wave of strikes happening around the country. Organized labor was a different animal then, and there was a considerably higher level of union membership among the population. For this week’s strike, unions in Oakland have expressed at least tepid support, but, thanks in part to the proliferation of no-strike clauses in union contracts, they don’t find themselves in a position to call for an outright strike among members. According to the office of Oakland mayor Jean Quan, city employees wanting to participate will have to receive approval from their supervisors but can use sick or furlough days. (This is independent of a fake website activists set up in the mayor’s name, which endorses the general strike outright.)

As so much of the Occupy movement has been, therefore, Wednesday’s strike will be a test of non-traditional organizing methods; people will have to be impressed enough with the movement—based on their evaluation of news reports, social media, and word of mouth—to opt out of work on an individual basis.

This is a crucial test of whether the occupiers have really managed to build a movement that is up to the task of challenging the economic and political status quo. So far, the sequence of marches, police raids, sit-ins, and theatrics has captured the public’s attention, but it has not yet challenged those in power significantly. Whether or not Wednesday in Oakland truly has an impact, the eventual success of the movement depends on whether it can build toward accomplishing something like exactly this.

This piece was originally published by WagingNonViolence.