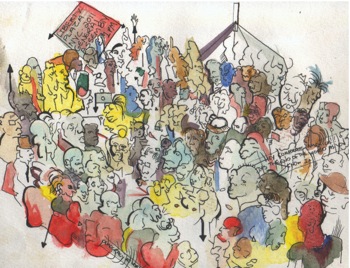 As the four-year-long global capitalist crisis deepens, social protest and turmoil are spreading. From the Arab world, Israel and Europe to Chile, the French Caribbean and increasingly the United States, demonstrations, strikes, riots and occupations of public squares are the order of the day.

The triggers for and demands of the protests reflect the specific conditions within each country, but the movements also exhibit a growing realization that the neoliberal socio-economic model is bankrupt even as it continues to subordinate national politics to the dictates of capital.

It is easy to dismiss this democratic upsurge as it has been unable to prevent the further consolidation of the neoliberal policies responsible for the present crisis. The resilience of capitalist elites seems especially surprising given the commonly held belief that this crisis would spell the end of free-market orthodoxy. This resilience is matched by the inability of traditional left politics to turn the current crisis into an opportunity to challenge the increasingly evident irrationality and injustice of the global capitalist system.

A case can be made for such a pessimistic diagnosis. After the initial successes of the Arab Spring in Tunisia and Egypt, the traditional forces of order have regained their footing by resorting to brutal domestic repression and foreign military intervention, as in Bahrain and Libya. Meanwhile, the brief turn of Western governments to mild Keynesian stimulus programs has given way to harsh austerity programs. The elite consensus is that the general populace must pay for deficit reduction, even though the deficits were a direct product of both the crisis itself and the lavish bailouts for the financial sector that precipitated the crisis.

And yet there is another side to this story. The planetary wave of protests also points beyond neoliberalism and toward the renewal of left politics that capitalism’s deepening social, economic and ecological crises has made more urgent than ever. A key element of this historic moment is the tactic of occupying public space in general and public squares in particular. It is a tactic that has captured the world’s imagination ever since the mobilization of ordinary Egyptians in Cairo’s Tahrir square played an important role in toppling President Hosni Mubarak.

Social protest through the occupation of public squares challenges how capital uses public space. Cities and communities successfully integrate themselves into the circuits of capital by branding the local to appeal to foreign investors.

Consequently, the disruptive power of occupying central or iconic places grows. This is especially so as globalization increases the economic importance of tourism in places as distant from each other as Cairo, Athens, London and New York. (For example, the 48.7 million tourists who swarmed over New York in 2010 came to consume Macy’s and Broadway, Chinatown and Museum Mile.) By contrast, the transformation of public squares into the locus of regular general assemblies open to all affirms that public space should be subject to the principle of democracy and the wishes of the many rather than the single-minded pursuit of profit by the privileged few.

Occupied and self-organized squares are also living examples of the principle that “another world is possible.” They are islands that obey a logic radically different from their surroundings. I experienced this last summer in Athens, where the central Syntagma square became a site of direct democracy that was a jarring contrast to a delegitimized parliament, hated banks, the obligatory McDonald’s and the luxury hotels hosting the foreign diplomats and technocrats who dictate the austerity policies that turn life into hell thereby driving Greeks into the streets.

The powers-that-be are keenly aware of the subversive power of such exhilaration and this is why the state in Egypt, Spain, Greece, New York and elsewhere has regularly enlisted force in attempting to evacuate the occupied squares.

One reason that occupying the square is so exhilarating is because it nurtures communities that reject the sterility and alienation of urban space produced by neoliberal capitalism. Neoliberalism depends on people seeking fulfillment in ever-rising levels of consumption that require individuals to work longer hours, get into debt and let their relationships with family, friends and neighbors — the true source of happiness — atrophy.

This rampant individualism is often complemented by reactionary definitions of community that seek to scapegoat immigrants and other minorities for the serious social problems that free-market policies invariably produce. Against the hate and selfishness that neoliberalism breeds, occupied public squares allow relationships to flourish between new acquaintances and old friends, while fostering a world based on solidarity that exposes the cynical, cut-throat nature of the present.

These movements offer as well a vision of direct democracy and self-organization that reflects the delegitimization of the economic and political elites who continue to reward themselves for their role in bringing about the crisis, even as they lecture the poorest and weakest for the supposedly lavish salaries, pensions and social rights and benefits that they enjoy.

As the dispossessed realize that the privileged rulers are unwilling and unable to represent the interests of society as a whole, more and more people are concluding that only their active participation in the decisions that affect their lives will guarantee that their needs and aspirations will be taken into account.

At the same time, the demand of direct democracy indicates the delegitimization of institutionalized politics in general, including left-wing parties and labor unions. The movement of occupying public squares reminds us that a radical alternative to capitalism has to challenge not just the concentration of wealth but also the divisions between rulers who deliberate, plan and make decisions and masses consigned to unquestioningly carrying out other people’s orders.

But direct democracy and self-organization are more than a demand. They are living practices that empower ordinary people by revealing to them their ability to effect change and take control of their own lives. This discovery is often born of necessity, as when Egyptian protesters found themselves directing traffic after the Mubarak regime was forced to withdraw the police from the streets or when protesters in Athens devised peacemaking committees to prevent violent clashes with police actively looking for an excuse to forcibly evacuate the squares. This discovery of self-rule challenges the premise underlying the militarization of police in the neoliberal era, namely the belief that a repressive apparatus is the sine qua non of public safety.

For years neoliberal ideology has equated capitalism with freedom and democracy. As the realities of growing inequality, unemployment and economic and ecological crisis become harder to escape, this idea is fraying. When the destructive decisions made by the few on top of the socio-economic pyramid are plain to see, and when everyone else is forced to pay for the sin of her leaders, the realization that capitalism and democracy are antithetical principles comes to the surface. The movements of the squares are an expression of this emerging consciousness. The more successful these movements are in helping this consciousness spread, the greater their contribution will be to the formation of a majoritarian radical movement that is strong and confident enough to pass from defense to offense.

Costas Panayotakis teaches sociology at the New York City College of Technology and is the author of Remaking Scarcity: From Capitalist Inefficiency to Economic Democracy, which will be published by Pluto Press in November 2011.