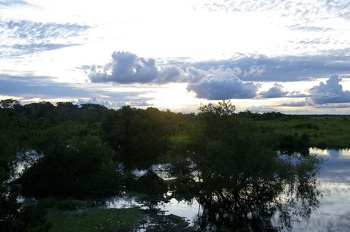 With victory cheers and predictions of future campaigns in defense of their ancestral territory, indigenous protesters from Bolivia’s Amazon jungle region celebrated the new law that banned the construction of the road through their rainforest reserve.

The 66-day march by the demonstrators to La Paz and the controversy over the road undermined the backing for President Evo Morales among his main support base, the country’s indigenous majority.

Late Monday, Morales signed into law the agreement putting an end to the plan to build the road that was opposed by some 1,000 native protesters from the Amazon, who made the gruelling 600-km march from the rainforest to La Paz.

The demonstrators, who were subjected to a brutal police crackdown in late September near a remote village 330 km north of La Paz, were greeted as heroes by thousands of people who took to the streets on Wednesday Oct. 19 to welcome them when they reached this city in Bolivia’s western highlands.

“The threat is latent, but the message sent out is that the native peoples have thought deeply about the defence of our territories,” indigenous lawmaker Pedro Nuni told IPS.

The legislator, who belongs to the governing Movement to Socialism (MAS) but disagreed with the Morales administration over the issue of the rainforest road, said “the government knows it cannot decide on the future of our land without consulting us.”

Nuni was pleased that, as he said, 95 percent of the 16 demands set forth by the protesters were addressed. The chief demand was the full cancellation of the project to build a 177-km road across the Isiboro Sécure National Park and Indigenous Territory (TIPNIS).

The 415-million dollar stretch of road was one small portion of a highway funded and built by Brazil across Bolivia, which will form part of an international corridor for the transport of goods from Brazil to the Pacific Ocean.

The 300-km stretch joining the cities of San Ignacio de Moxos in the northern province of Beni and Villa Tunari in the central province of Cochabamba, which was to cut across TIPNIS, would have reduced a 16-hour drive between the two cities to just four hours.

The local communities in TIPNIS are actually divided over the road, with peasant movements, trade unions, transport workers, shopkeepers, traders and some indigenous communities defending its construction on the argument that it would bring development.

The TIPNIS national park covers more than one million hectares in the provinces of Beni and Cochabamba and is collectively owned by some 15,000 people from three indigenous groups: the Moxeño, Yuracaré and Chimane Indians.

The law enacted by Morales was hastily approved by the legislature as the demonstrators held a vigil outside the building.

The new legislation confirms the importance of the sociocultural and natural heritage of TIPNIS.

Recognition of the indigenous groups’ collective right to the territory was achieved 21 years ago, when native people from the country’s Amazon rainforest first marched to the highlands of La Paz and secured government recognition of four indigenous territories that were threatened by logging companies and the exploitation of other natural resources.

The 1990 march threw the forgotten and neglected indigenous communities of the Amazon region into the limelight for the first time.

But this time the roughly 1,000 men, women and children from the jungle did not march alone. They were joined along the way by a similar number of indigenous people from the highlands and the Chaco grasslands region who are worried that many of the country’s 84 collectively-owned indigenous territories, known as Tierras Comunitarias de Origen or TCOs, are under threat because they are rich in oil, forests, minerals and other resources that foreign corporations are keen to get their hands on.

The indigenous peoples of the Amazon region make up 10 percent of the 10 million inhabitants of Bolivia, where over 60 percent of the population are native people, mainly belonging to the Quechua and Aymara ethnic groups concentrated in the western highlands. Morales, the country’s first-ever indigenous president, is an Aymara Indian.

In an interview with IPS, environmentalist Carmen Capriles, one of the leaders of the Save the Madidi Campaign, discussed the concept of the “plurinational state”, as established by the new constitution that went into effect in 2009, in which she said indigenous communities and people of mixed-race or European descent mutually recognize their different identities while declaring their unity in the Bolivian state.

The activist, who is working to defend the 1.9-million-hectare Madidi National Park in northwestern Bolivia, said the plurinational state was achieved by a struggle waged along the country’s roads and in its jungles and mountains, in the face of repression and stiff opposition.

Capriles also said there is a growing sense of unity between indigenous people from poor rural areas and from urban slums, who are forging a natural alliance to defend nature.

Morales’s reputation as one of the world’s foremost champions of the environment was hurt by the plan to build the road across the TIPNIS reserve.

The leader of the TIPNIS native communities, Fernando Vargas, defended the rights of the people living in the reserve to use the natural resources there in a sustainable manner that preserves the park. He also urged Morales to build a country that is based on the conservation of nature, while alluding to future battles by indigenous people to preserve their lands.

But Capriles said the law putting an end to the conflict over TIPNIS was an isolated solution that leaves other protected areas and TCOs vulnerable.

She was referring to areas like the Madidi National Park and the Pilón Lajas Biosphere Reserve and Communal Lands in the north of the province of La Paz – which are close to recently discovered oil reserves.

In addition, the projected El Bala hydroelectric dam would flood some 300,000 hectares of land in the Madidi National Park and the adjacent Pilón Lajas biosphere reserve and indigenous territory, including the TCO owned by the Leco indigenous community.

“The people of the eastern lowlands and the western highlands should not treat each other as enemies,” said Vargas. “Let’s continue forging ahead with the process of change, but without destroying the ‘tierras comunitarias de origen’, and with full respect for the rights of indigenous peoples.”

The head of the Confederation of Indigenous Peoples of Eastern Bolivia (CIDOB), Adolfo Chávez, who led the march, called for “unity in peace” but urged Morales’ ministers to avoid provoking “popular outrage.”

Morales, meanwhile, said all responsibility for the cancellation of the road fell on the heads of the indigenous leaders who led the march. He told them they would have to explain the decision to the inhabitants of TIPNIS who wanted the road built.