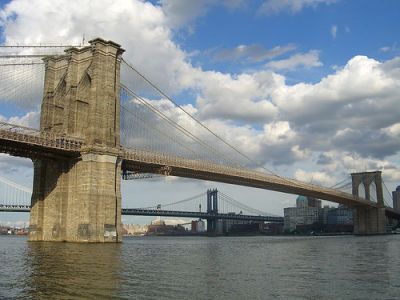 There was no sleep to be had in Brooklyn. Earlier in the day, the Occupy Wall Street encampment in Manhattan’s financial district faced at least temporary eviction under Mayor Bloomberg’s promise of a sanitary “clean up.”

The possibility of eviction drew hundreds of supporters into Liberty Park on Friday morning, standing in solidarity with the occupiers decision to remain in the park — no matter what the mayor said. In the evening, across the East River, Brooklyn held its first General Assembly meeting at The Commons on Atlantic Ave.

In support of the Occupy Wall Street and the General Assembly consensus process, Brooklynites held their first general assembly meeting. Unlike the open space of Liberty Park in Manhattan, attendees of the Assembly in The Commons were protected from the misty air and sporadic downpours. The Commons, a space that facilitates “skill-sharing in the heart of Brooklyn,” hosts a number of community-based classes and events including Botany Field Day at the Botanical Garden, Harvest Festival and Square Dancing, the Great Reskilling and a screening of the film “Portraits of the Solidarity Economy.”

The chance to create a society in which we want to live and raise our children is one of the driving forces of the Occupy Wall Street movement and has manifested in Zucotti Park as making consensus-based decisions to create a People’s Library, the Lawyers Guild, free educational classes and workshops on variety of topics, ample food, medical supplies and a vibrant arts and culture scene, to name a few. For some, the society in which they want to live gives them the opportunity to pursue the skills and interests they have. The General Assemblies have served as the mechanisms for which people in a community propose ideas and ways of executing those ideas together. There they establish what working groups are needed to propel their community to direct action. Before each proposed action is set forth, the group must, for the most part, unanimously agree. It only takes one person to block a movement.

No two General Assemblies (GA) are the same as the topics discussed will focus on the needs of that particular assembly. For example, Zucotti Park’s GA meeting Thursday night focused on how to respond to the possible eviction due to Mayor Bloomberg’s call to clean the park, garnering the mass support of AFL-CIO and other labor unions from midnight to Friday 7AM. The result of which the “cleanup” was postponed due to the several hundreds of people trickling into the park and posing as a potential for bad public relations for Mayor Bloomberg if they were arrested en mass, again.

There was no “mic check”—as system used to amplify the speaker’s voice by having the audience repeat what is said due to lack of an electronic amplifier—necessary because the acoustics in The Commons made it easy for one speaker to be heard so long as she articulates. The evening opened with an “Awareness Check” to make sure everyone is on the same page and know the hand signals used in general assemblies, was caught up to date with happenings at Zucotti Park and knew what and how a general assembly functioned. Approximately 60-70 people attended the first Brooklyn meeting, and there was definitely room to grow, leaving the initial attendees to discuss the location of the next meeting.

Pressed for time, there were many things to discuss once the ball got rolling. First, there was the issue of booting people from Liberty Park. Then there was the first Brooklyn OWS-inspired rally at Grand Army Plaza. Another topic discussed for quite some time was if the press or individuals were permitted to document via photograph or film the Brooklyn General Assembly. Some people were uncomfortable at the fact that someone was filming—something that happens around the clock in Liberty Park. Eventually, those people who did not concede to allow filming left and declared to participate by other means. Next, there needed to be a clarification of how the Brooklyn General Assembly is connected and different from the General Assemblies at Occupy Wall Street. The Brooklyn General Assembly decided that the first Occupy Brooklyn would be at Grand Army Plaza at 11am on Saturday. There was also concern for helping out the farmers markets at Grand Army Plaza by patronizing their stands, yet not obstruct them during the rally. Saturday’s Occupy Brooklyn coincides with the march against banks in Manhattan. There was talk of Occupy Brooklyn meeting up with Occupy Wall Street in Midtown for the 5PM march.

One of the facilitators explained earlier in the evening, “We want this to be a form in which everyone is heard. We also want to balance everyone being heard and actually getting things done.”

With the diversity of Brooklyn’s population represented at the initial Brooklyn General Assembly, the possibilities of getting things done for local communities seem limitless. However, in a top-down culture, the culture of consensus is still very new and one must wonder to what extent will individuals reconcile their differences for the greater good.