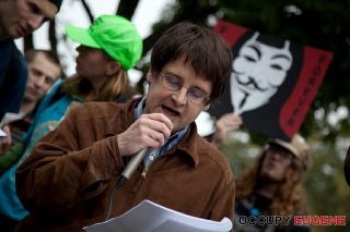 We are here as part of the Occupy Wall Street movement, which in a few short weeks has become a global movement in hundreds of cities around the world. We are part of the 99 percent not only in this country but the world.

I have been reading the mainstream, corporate media. I have been listening to the pundits, the power brokers, the politicians. They criticize our movement, saying we don’t really know why we are here. They claim that we are simply angry; that all we are is an “emotional outcry.” House majority leader Eric Cantor calls us “a growing mob.”

Wall street bankers interviewed by the New York Times say that we are “fringe groups”; that we will “thin out” and disperse when the weather gets colder.

A New York Times article reported yesterday that we were confused “liberal activists” fed up with partisan politics but with no real ideas of our own. An editorial in the same paper said we were just protestors, with no clear demands. We are well meaning, they conceded, but it is the politicians, not the people in the street who have the job—so they say—of determining the future course of things, not us, not the 99%.

Foreign Affairs magazine, the publication of the Council on Foreign Relations, writes that Occupy Wall Street is critical of Wall Street, but not of capitalism; they say that we do not question the system itself.

They are wrong. We are part of the growing army of the Occupy Wall Street movement worldwide. And we know why we are here.

In 2009, I participated in a discussion about the global financial crisis on Democracy Now! I said then that we were in a period of long-term economic stagnation (of which the financial crisis was simply a symptom). The closest historical precedent was the Great Depression. I pointed out that it took about four years after the 1929 stock market crash before there was a revolt in the United States in the 1930s—what we know as the Great Revolt from Below—which resulted in the industrial union movement, the rise of the CIO, and the second New Deal. The revolt didn’t come in earnest until a year or more after the economic recovery had started in 1933, when people suddenly realized that the recovery was false.

I said that a similar Great Revolt from Below was likely in the United States today, given a deep and lasting economic stagnation. But that we might have to wait three or four years, just as in the great depression, for it to get off the ground, and for the people to ignite. That, just as in the Great Depression, the revolt would not materialize until people had learned that the promise of economic recovery was false, that they had been lied to and systematically robbed. Occupy Wall Street, Occupy Eugene, Occupy the United States is the Great Revolt from Below in our time.

But what we are witnessing this time is the growth of something much larger still. In a matter of a few weeks we have watched the emergence of an Occupy the World movement. Everywhere people are uniting in struggle. When I was in Australia at the beginning of October, when this all was getting started, radical activists were absolutely glued to the events in occupy Wall Street—even before it was being reported by the mainstream media in this country. Why? Australia is on the other side of the globe. Why should they care about a resistance movement in New York?

The reason is that we in the United States live in “Fortress America,” the heart of a world empire. Revolts are not supposed to happen here! If a break in the wall appears, if massive protests occur, here, “Inside the Monster,” as José Martí called it, the whole world is suddenly uplifted and encouraged to resist. Because then they know that the empire is crumbling. Our struggles here are opening up space for resistance for all the people of the world.

What does occupy mean? Why is an occupation so important? Why is this movement so different? It is because it means we are not going away. We will not disperse. We will remain. We will win. The world requires it.

This article was originally published by MonthlyReview.

Authors Fred Magdoff and John Bellamy Foster address the connection between capitalism and the destruction of the planetary eco-system in their new book, What Every Environmentalist Needs to Know about Capitalism.  From crop yields to weather patterns, our global economic system has dramatically altered the planet we inhabit. The book’s authors address those changes, as well as alternative economic models, at the Brecht Forum this Saturday, October 22 at 6 p.m.