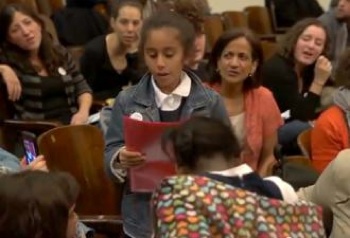 New York City school officials came face to face with the Occupy protest movement October 25 when 200 teachers, students, parents and community members descended on the first Panel for Education Policy (PEP) meeting of the school year. Within five minutes of the start of the meeting, the panel–largely consisting of billionaire Mayor Michael Bloomberg’s appointees–canceled most of its scheduled agenda.

The reason many teachers and parents view the PEP as a hostile force that needed to be occupied is that the panel doesn’t represent them–it gives the illusion of being a democratically-run school board, but, in fact, answers directly to the mayor.

Over the past few years, the panel has rammed through Bloomberg’s agenda for public education with almost no dissent, despite widespread anger and protest. The PEP rubber-stamped decisions to close down dozens of New York City schools, plus open numerous new charter schools, some of them crammed into public school spaces.

The agenda of the first PEP was a discussion about implementation of the new Common Core Standards. At a time when budgets have been drastically slashed, class sizes are larger than they’ve been in a decade, and many schools have lost the classroom aides who make things run smoothly, school officials claim they want to talk about raising standards–but won’t answer any of these urgent problems.

This was business as usual, fitting in with the Department of Educations (DOE) high-stakes testing approach–and also reinforcing the message that the problems with New York City schools begin and end with teachers in the classroom.

At 6:02 p.m., the PA system clicked on to signal the start of the meeting. Within seconds of a board member starting to speak, a voice on the floor called out, “Mic check!”–and the room responded, “Mic check!”

As panel members tried to restore order to the room and introduce their agenda, the “people’s microphone” sounded out with a recounting of the undemocratic practices of the PEP and a demand that the voices of the community finally be heard. After the first speaker finished, the people’s mic was picked up by a teacher and parent who pointed out the DOE’s disregard for the real needs of New York City’s students–and students’ increasing disillusionment with their education, due to the cookie-cutter curriculum and the constant testing.

As the mic was passed, the grievances of students, teachers and communities were heard. One student called out, “I am an 8-year-old third-grader. I support smaller classes, including teachers and school aides–my class is too big, it has 28 students–more support for teachers, less state tests, and more art and music in my school.” The DOE is moving in the exact opposite direction with its plan to implement the Common Core Standards–and impose testing even for kindergarten through second grade.

Former teacher Michael Friedman began his turn on the mic by explaining that 15 years ago, he taught in Seward High School–now Seward Park Educational Campus, where the meeting was taking place–and he watched the DOE begin the process of breaking it into pieces. He explained that the DOE “shut down Seward High School because of low reading scores when 99 percent of students were immigrants.” He finished by asking, “If the chancellor’s testing agenda is working so well, then why are only 21 percent of high school graduates ready for college work?”

Other speakers made connections to the plight of higher education, protesting the end of open enrollment at CUNY, tuition increases at public colleges and universities and the replacement of 60 percent of CUNY faculty with poorly paid adjuncts,” who have little to no job security.

A Parent Teacher Association member stood up and explained that parents want a voice and a meaningful relationship with the DOE, not just the lip service they get now. Then a charter school mother told the story of her son being kicked out of a Harlem Success Academy within days of enrolling because he is a student with special needs. The charter school told her that they could not teach him.

Some of the 700 school aides who were laid off by the DOE earlier this month came to the protest and started up the chant “Take back the workers!” on the people’s mic. Many speakers talked about how the job cuts–which mainly targeted Black and Latino workers, according to the aides’ union AFSCME District Council 37–would cripple our schools and threaten safety, at the very same time that the DOE continues to hire highly paid “experts” at the central office.

As the “people’s mic” was passed from speaker to speaker, members of the PEP offered their appreciation for “the activism,” but requested that people stop shouting so the meeting could carry on. What they didn’t understand was that the meeting was carrying on just fine.

Within five minutes of the people’s mic taking over the meeting, panel members decided to junk part of their agenda and move straight to a small-group breakout session that would take place upstairs–in other words, shutting out the voices of concerned parents, teachers and students before the meeting even started.

As Chancellor Dennis Walcott was preparing to leave, Kelly Wolcott, an activist with Occupy Wall Street and Teachers Unite, called out via the people’s mic, “Chancellor, before you go. I’d like to invite you to join us for a real democratic conversation.” She extended an invitation to an upcoming General Assembly scheduled to take place on the steps of Tweed, the headquarters of the DOE.

Walcott didn’t comment or accept the invitation. He stayed long enough to be interviewed by the press and was then escorted from the auditorium by police to the cries of “Shame! Shame! Shame!” from the crowd.

People arriving late for the PEP meeting had been directed upstairs to the small group discussion, and away from the auditorium where the “protest” was happening. Edna Castro, the parent of a third-grade student, got to see what the DOE meant by a “conversation with parents” when she met with PEP members–and heard questions by parents brushed aside and not seriously addressed.

“One parent asked how the core curriculum being implement with such young children would effect Black and Latino kids who were already struggling and would be made to feel like failures at an even earlier age,” Castro said in an interview. “She was told that Black and Latino kids are doing better than ever and that proof of that was who was sitting in the White House.”

Castro said the panel members said only the kids of immigrant parents aren’t doing well. “I told them that I grew up in the Bronx with immigrant parents, and I have two masters degrees,” she said. “And when I was in 3rd grade, I didn’t have to take all these exams.” She was told by a woman in a suit that she “didn’t get it.”

Castro also questioned how the DOE could come up with tens of millions of dollars from corporations like GE to train teachers in the core standards curriculum, but it couldn’t find money to hire more teachers or repair or build schools. “It just doesn’t make sense,” she said. “How can my son learn when there are 29 other kids in the classroom?”

What panel members dismissed as a disruptive “protest” was, for the participants, an empowering demonstration of strength and a validation of their voices.

As Jen Roesch, a parent and member of the International Socialist Organization, said, “They want teachers to blame parents, and they want parents to blame teachers. I am a parent, and I refuse to play their blame game.” She pointed around the room and said: “This–this is the partnership!”

The DOE walked out on parents, teachers and students, laying bare their priorities and leaving no question about who our allies really are. As a next step, activists are planning an Occupy General Assembly on the steps of the Department of Education to begin the work of crafting a people’s agenda for the public schools.