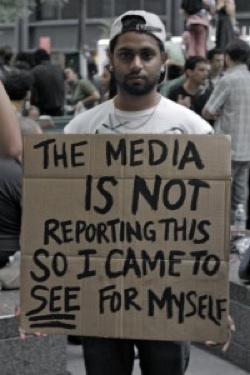 Among those part of and concerned with the Occupy Wall Street movement, it’s very common to hear complaints about the lack of mainstream media coverage. There’s even a sign at the occupation’s media center that says, “Welcome to the media blackout.” To a large extent, the blackout is real. The New York Times and other local papers didn’t give the movement headlines until almost a week in, with the exception of a cover story in Metro that first Wednesday. And, while several local TV stations were at Liberty Plaza during the first week, their reports weren’t being picked up by national affiliates. Only recently has this begun to change.Online, there have been accusations of outright censorship. Yahoo has admitted to “not intentional” blocking of emails with links to occupywallst.org, blaming their spam filter. (This excuse is not widely believed, but plausible—I’ve seen the site trigger non-Yahoo spam filters as well.) Twitter has similarly blocked #occupywallstreet from being listed as a trending topic. (This may be because it keeps being throttled by Anonymous bots—or, more conspiratorially, because a considerable stake in the company is owned by JPMorgan Chase, which also just donated $4.5 million to the NYPD.)

Really, though, what do you expect? Resistance movements should not count on coverage by establishment news outlets, much less favorable coverage. Mainstream media are usually a part of a movement’s opponent, and they certainly are in this case. The movement’s job, then, is to make its actions so irresistible that the media have to cover it, despite themselves. In an instructive essay about her experience doing media relations during the fight for civil rights in the 1960s, Mary King writes:

[A]ttentive news coverage can never be taken for granted or assumed. It must be won. Gaining the attention of the news industry is one of the central functions that must be planned by a nonviolent movement that hopes to succeed.

In this respect, Occupy Wall Street is already succeeding.

These protests, it must be recognized, are getting much more coverage than any other protest in recent years (with the exception of ones held by the well-funded Tea Party), including ones involving far more people. Like unions, celebrities, police, and many would-be participants, though, it took some time for the media to begin to recognize that something of substance is taking place. By definition, the establishmentarian mainstream media will always be slow to react to a dynamic grassroots movement. That this is the case here could even be a good sign for the movement’s long-term prospects.

Part of the blame for poor coverage, too, lies in the movement’s own media strategy, or lack thereof. From the outset, its organizers have focused primarily on creating their own media—just as Gandhi did during the Indian liberation struggle, and as so many other movements have since. The occupiers do this very well, with a (theoretically) 24-hour livestream, a newspaper, websites, and more. Meanwhile, many organizers have purposely avoided contact with mainstream media outlets, and no plan was in place at first for how to deal with them should they arrive. Reporters—with the sole exception of me, after a lengthy discussion on the matter—were asked not to be present at the planning meetings before September 17. For the first week of the occupation, media relations was being overseen largely by one valiant but overworked college student with no previous experience in it (plus a probably-counterproductive onslaught of Twitter mentions directed against news services who failed to give coverage). Wire services weren’t being informed about upcoming events. Those reporters who did show up at the plaza were left to wander, without guidance about whom to interview or what was going on.

This is changing. Several older people with experience in media relations have joined on to help, as well as more skilled young people. Now there’s an email list, a calendar, a workflow, and the wisdom gained from a few mistakes—such as, for instance, Friday’s Radiohead concert debacle, which appears to have been the work of a rogue prankster. So there’s hope.

Something changed over the course of last Monday, for instance, at least in the heads of the species of made-up, spotlessly-dressed television news reporters who were swarming among the dirty and battle-worn protesters. In the morning—and their trucks were out bright and early—the reporters were after one thing and one thing only: the pepper-sprayed girls. A mere witness wouldn’t do, Mr. Channel 7 told me, gravely. His journalistic integrity forbade it. He had to have one of those poor girls, caught on by-then viral video, who had been pepper-sprayed with no apparent provocation by the NYPD’s notorious Deputy Inspector Anthony Bologna.

By afternoon, though, their attention shifted. Maybe it was because the sole pepper-sprayed girl who had been around that morning left. Maybe it was already old news. But then the questions they asked started getting more interesting. Instead of gory details, they finally began asking just what exactly all these people were doing in rechristened Liberty Plaza. And, after getting bored of asking sign holders “Why are you here?” and ogling at the generator-powered media center, they even became curious about the all-important General Assembly meetings.

They’ll probably never really get it, but, with time and help, they’ll get better. No mainstream news report, though, will ever substitute for seeing the occupation for yourself.