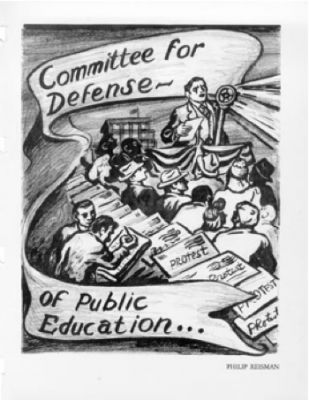 “Once-Proud Campus a Breeding Ground for Idiots”— this was the headline of a 2001 editorial published in the New York Post reporting on a post-9/11 teach-in at the City College of New York (CCNY). Though the teach-in focused on fostering a progressive and pragmatic discussion among professors and students about the 9/11 attacks, the mainstream media saw this gathering as a radical attack against America itself (the Post also ran a more prominent article on the teach-in, with the headline: “CCNY Bashes America”).

Ten years later, with our interminable Middle East military adventures garnering such mixed feelings in the country at large, it’s worth remembering the time — right after the fall —that the war drums were beating frantically, loudly enough to muffle everything else.

Carol Smith certainly remembers. A former CCNY professor, she was one of the organizers of the 2001 teach-in. The silencing of academics in the wake of 9/11 inspired her to curate “The Struggle for Free Speech at CCNY, 1931-42,” a traveling exhibit documenting the surge of Depression-era radicalism at City College, along with the vicious (and quite effective) right-wing backlash. Currently installed at CCNY’s Center for Worker Education in downtown Manhattan, the exhibit itself is a small affair — just a handful of printed panels in a nondescript hallway. As a traveling exhibit, it’s much better suited to the internet, where it can travel forever in the ether. Seemingly unchanged from its early 2000s debut, the website is a fine example of the sort of web 1.0 resource that no one makes anymore — a simple, valuable look at a major moment in activist history.

During the 1930s, CCNY — a cheap school filled with working-class students — was a hotbed of left-wing activism. Smith posits that the radical student organizations of CCNY had a profound influence on progressive politics in the following decades. Quoting history professor Robert Cohen: “The student rebels of the Depression era rank among the most effective radical organizers in the history of American student politics.” Thirties-era radicals produced a wealth of appealing visual ephemera, and this is the meat of Smith’s exhibit: hand-drawn flyers for upcoming rallies, two-fisted cartoons from Communist dailies, pages from samizdat and teacher-produced publications. Frederick B. Robinson, the hawkish and censor-happy school president, is featured in some particularly angry caricatures: he’s portrayed variously as a Nazi newsie, a fat-butted flatfoot, and a proud kitty-cat whose tail is wagged by Tammany Hall (obviously). A cartoon from The Daily Worker, drawn in the thick of the Depression, features the memorable picket sign “We Refuse to Starve!”

But, more than the protests, walk-outs, mobilizations and publications, it was the reactionary response to student movements which reverberated into the rest of the 20th century. In 1940, New York State legislators created the Rapp-Coudert Committee to quell potential “subversive activities” in New York public schools. Rapp-Coudert’s techniques — secret hearings, public denouncements and the summary firings of suspected Communisits — set the standard for the House Un-American Activities Committee’s red-scares and blacklists of the coming decade. As Smith put it in a recent article for Academe magazine, the Rapp-Coudert hearings served as “the dress rehearsal for McCarthyism.” It is worth noting, though, that by the time of the Rapp-Coudert hearings, the horrors of Stalin had already done much to undo the radical Left from within.

Looking at Smith’s exhibit, it’s strange to consider how much of what it depicts still feels familiar. While the stories of powerful unions and populist American radicalism feel, more and more, consigned to another era, the fear of Communism — more than 20 years after the end of the Soviet Union — has yet to cool. At a time when a great many Americans seem to consider centrist liberal policies as some coded form of radical socialism, it’s worth taking a look at the past: considering what, for good or bad, radical activism really looks like, and remembering that, over time, attacks on free speech just don’t hold up well. This is America, after all.