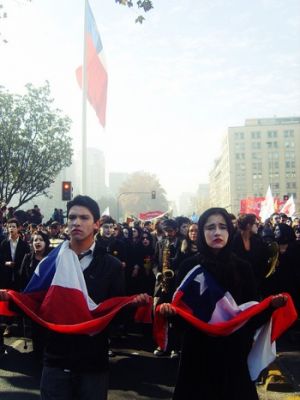 Chile is widely touted as a Latin American economic miracle of with an annual growth rate of 5 percent, stable finances and an average per capita income of more than $15,000. Yet, its prosperity is belied by some of the highest income inequality in the region and a lack of social mobility.

From an early age, Chile’s students confront an education system that is deeply segregated by class in which government monies flow into privately run schools while public schools are starved for funds. To receive a university education, students from poor and working-class families have to go deep into debt to afford tuition, which can be as much as $20,000 per year – a figure inconceivable for the average Chilean.

It’s a scenario that would be familiar to many students in the U.S. But unlike their docile American counterparts, Chilean students are taking action to remake their education system.

Since protests began in May at the University of Chile, the student movement has carried out a nationwide strike in universities and high schools that now enters its fourth month. The movement’s largest protests have drawn hundreds of thousands of people. The students are garnering support from teachers, workers and families struggling to pay for their childrens’ education. Support for the students’ cause runs as high as 80 percent in public opinion polls.

The students have peacefully occupied high school and university campuses in provinces throughout the country, turning the buildings into communal spaces. When the takeovers (or, tomas as they are called in Chile) peaked in mid-August, students were occupying 500 high schools and 22 universities in the capital of Santiago alone. During these occupations, groups of students would remain inside schools around the clock, cook donated food, teach individual workshops, and organize activities on the campuses.

Theaters were converted into general assemblies and theater balconies served as a bedroom.

The students are using their creativity to emphasize the peaceful nature of the protests. Innovative demonstrations have included zombie dances of Michael Jackson’s “Thriller” (to underscore the neoliberal state’s zombie-like hold on their futures), two minutes of national lip-lock– El Besaton, or The Kissathon – to signify the love and passion inherent in the student movement, a month-long relay race around the Presidential Palace, and many more such actions.

After a similar strike by high school students peetered out in 2006, the election of rightwing billionaire President Sebastian Piñera in 2010 reanimated the student movement which insists that education is a social good that should be available to all.

University student demands include a new system of scholarships (not loans) to provide free education to poor and working class students, a more equitable admissions process to prestigious universities, the creations of a watchdog agency to prosecute universities using loopholes to earn profits and a repeal of laws forbidding student participation in university governance.

The high school students, more loosely organized, are pressing similar demands for more state funding as well as a moratorium on the creation of more publicly funded charter schools, an end to a system of local control of schools that leads to inequalities, as well as free access to public transportation.

More than confronting a highly privatized education system, the student movement has mounted the strongest challenge to Chile’s neoliberal order since it was imposed through a 1973 military coup that toppled the democratically-elected socialist government of Salvador Allende and left thousands of his supporters dead or in exile.

Democracy was formally restored in Chile in 1989 but the neoliberal framework developed during the dictatorship has been perpetuated by coalition governments of both the center-left and the center-right.

The government has responded to the student movement with tear gas, rubber bullets and water cannons while pro-government media outlets have unsuccessfully sought to write off student activists as “delinquents”. Violence erupted on August 5 when Chilean authorities prevented student demonstrators from entering downtown Santiago and on Aug. 25 when police shot and killed a 16-year-old student protester.

The younger generation that came of age after the dictatorship, does not have the fear of their parents’ generation and their actions have reawakened older Chileans who had despaired of ever seeing real change again in their country. The dream of the Allende years of a socially inclusive Chile has not vanished in spite of almost four decades of neoliberal social engineering.

“I am surprised…[but]…the movement confirms what I have been predicting and feeling for awhile ,” Chilean economist Gabriel Salazar told CNN Chile. “…This civil transition from the bottom is very different from a political transition from above.”

With support for the students running strong, Piñera has sought to co-opt the movement with half-measures such as a modest increase in scholarship money and slightly lower interest rates on student loans that don’t fundamentally change the education system. He has also sought to outwait the student movement by initiating negotiations that have gone nowhere.

Sustaining a high level of mobilization over many months is difficult and students face losing a whole school year as the strike drags on. Police have begun to dislodge students from many of the occupied schools, and the government has extended the end of the school year from December to March and threatened to revoke the scholarships of students who do not finish their classes. This has created divisions within the movement as some students have much more to lose than others by continuing the strike.

Still, the student movement continues to organize large protests and enjoys the support of the majority of the population. Whether it can force the political class to reorient the education system to meet human needs instead of market imperatives remains to be decided – both on the campuses and in the streets.

Shalini Adnani is a freelance journalist based in Santiago, Chile.