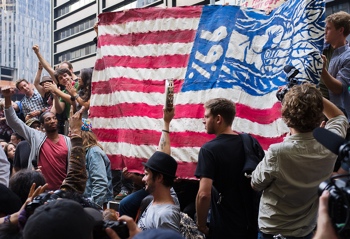 A month after it began with a few hundred people marching on Wall Street, the #Occupy movement has grown to include tens of thousands of participants throughout the country and has captured headlines around the world. If it has not yet succeeded beyond its wildest dreams, that’s only because its participants have dreamed big: imagining a sustained popular uprising that could force fundamental changes in our political and economic system—ones that could end corporate dominance and promote real democracy.

The movement can, in fact, propel significant changes. But #OccupyWallStreet and its allied occupations still have a ways to go before realizing their potential. The two issues most pressing as they chart their next steps: solidarity and escalation.

Despite great success in capturing the public eye, the actual number of people camped out at the various occupations around the country remains relatively small. While there are several hundred people camping in hubs such as New York City and Los Angeles, overnight participants in smaller cities number in the dozens. What bolsters the power of these encampments is that they are representative of a much wider discontent. Far greater numbers of sympathizers turn out for mass meetings, marches, and online shows of support. And, importantly, more established political bodies—unions, advocacy organizations, and community groups representing large constituencies—have offered endorsements of the growing #Occupy effort.

As more have signed on, some activists have been wary of outside expressions of support. Particularly as Democratic Party officials (including President Obama and Vice President Biden) have said positive things about the movement, some have voiced concerns about “cooptation.” They have argued that outside liberals, “while pretending to advance the goals of the Occupy Movement,” could instead “undermine it from within.”

How big of a danger “cooptation” actually represents is a matter of dispute. In a recent interview, Chris Maisano asked veteran social movement theorist Frances Fox Piven about this issue. (Piven is author, among many other books, of the landmark Poor People’s Movements and has considered the issue of cooptation at length in her work.) I believe she struck the right tone in her response:

Maisano: [As] recent comments by even the president and vice-president have showed, a lot of the more institutionalized forces on the left like the unions and MoveOn and the Van Jones American Dream Movement are trying to latch on to the protests and turn them into what some people have called a liberal version of the Tea Party. How do you think their involvement will effect the movement? How should the activists at the core of the movement relate to them?Piven: They should be friendly. They should ask them to do things; they should give them assignments. And not adopt the insignia of these groups as their own. In other words they should maintain considerable autonomy, but nevertheless they should treat these groups as allies, as they treated the unions as allies. But they shouldn’t ever let unions tell them what to do, they shouldn’t let Van Jones tell them what to do. Partly because they seem to know better, really.

So I don’t think that’s their biggest problem, how to deal with their erstwhile supporters.

The danger of cooptation should be put in context. There have been some clearly opportunistic instances of Democrats trying to capitalize on the movement, such as the none-too-radical Democratic Congressional Campaign Committee attempting to build its mailing list through a “I Stand with #OccupyWallStreet” petition. But is it really possible that the Democratic Party would somehow swoop in and “take control” of the #Occupy movement? It doesn’t seem like even a remote possibility.

Moreover, Peter Drier has made the important point that, when it comes to social change, imitation is the sincerest form of flattery. The fact that mainstream figures attempt to co-opt and advance watered-down versions of movement demands (as they did with once-impossibly-radical calls for “a progressive income tax, the eight-hour day, the direct election of Senators, old age insurance, and voting rights for African Americans”) is not a defeat, but a sign of victory. Of course, if activists use this as an excuse to call it a day, that is a problem. But if we treat it as an occasion to push for even greater changes, it is a very positive thing.

One problem with the rhetoric of “cooptation” is that it casts the need to expand the movement’s reach in a negative light. It leads figures such as Chris Hedges, in a more-radical-than-thou cri de coeur, to adopt right-wing talking points denouncing allies as “union bosses,” rather than to approach coalition-building in a constructive manner. This is unfortunate. For, while cooptation is something to be avoided, a much more pressing and ongoing need for the #Occupy movement is fostering solidarity.

Before #OccupyWallStreet ever existed, there were lots of people working to fight banks, reverse foreclosures, and challenge corporate power. The problem was that their efforts were isolated and almost universally ignored by the media. The #Occupy movement has created a great opportunity for many of these campaigns to see themselves as part of a unified fight and to receive an added jolt of energy. In return, the more groups that sign on and see themselves as part of the #Occupy effort, the more that movement is able to sustain its status as a growing and dynamic force. It gains greater numbers of participants, more diversity, and heightened credibility.

Many actions that different local occupations have embraced have grown out of solidarity with groups that were already organizing to advance the interests of the 99 percent. As just one of many examples, #OccupyLA joined up with an anti-foreclosure action against several banks and successfully compelled the reversal of at least one foreclosure decision. This action—wonderfully militant and effective—did not emerge out of the occupation itself. Instead, it had already been organized by the Alliance of Californians for Community Empowerment (ACCE), an LA community organization. But the fact that the #Occupy movement joined in solidarity was a great boon to all involved. It added a ton of energy to ACCE’s direct action. And, for the #Occupy folks, the positive media attention created by the action generated greater excitement about the City Hall encampment and helped bring a wider range of people to the occupation’s assemblies.

Piven gave a prescient answer: “Spreading the movement. Thinking of second, third, fourth, fifth phases. Other forms of disruptive protest that are punchier than occupying a square.”

She is right. If the #Occupy movement is to remain in the media spotlight and continue gaining momentum, it must escalate. That could involve many steps, including occupying banks, continuing to use direct action against foreclosures, and embracing further international days of action. Solidarity will be an important part of all of these.

Within the call of “We Are the 99 Percent” is the idea that, while no one can take over the movement—no single individual or group can declare it over or announce that its ambitions have been satisfied—the coalition of those invited to take part is vast. The movement draws power from its reach. And that is no small part of its brilliance.

This article was originally published by Dissent.