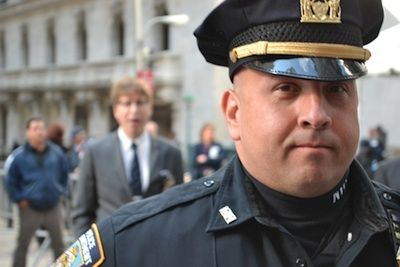 Today marks two significant milestones in one for the ever-growing occupation movement. Concerning the flagship site, Liberty Plaza near Wall Street, Mayor Michael Bloomberg expressed his willingness to allow the protest to continue as long as it needs to. “The bottom line is—people want to express themselves,” he’s quoted as having said in The Wall Street Journal. “And as long as they obey the laws, we’ll allow them to.” Then, in the late afternoon in Washington, D.C., Park Police officials made an offer to the October 2011 movement now occupying Freedom Plaza along Pennsylvania Avenue, which seemed both shocking and inevitable: a four-month permit to stay, subsequently accepted by consensus by the occupiers’ General Assembly. The officials reportedly even expressed to the occupation’s organizers their personal support for the movement.

“Would it be helpful for you to have arrests?” they asked. Nudge, wink.

After having spent a few weeks in Liberty Plaza under the panoptic eye of the NYPD, and having heard untruth after untruth from them and empty threat after empty threat, it’s a little hard to take such kindness too seriously. Nevertheless, from the start of the occupation at Freedom Plaza on October 6—as well as the one that began some days earlier at D.C.’s McPherson Square—the Metropolitan Police Department has shown that it is clearly determined not to repeat the NYPD’s mistakes. Their every aggressive action has only strengthened the Wall Street movement. While unpermited marches on the streets of New York have been taken as cause for mass arrests, for instance, D.C. police have been actively clearing the streets for even a relatively small group of marchers and leading them wherever they’d like to go. Despite threats, there have been no arrests for occupiers sleeping—illegally—in D.C. public parks. Even in New York, now, the police have become an ever-less threatening presence in Liberty Plaza over the course of the occupation. It’s worth noting that both occupations continue to break the law as a matter of course by sleeping and erecting structures. But, for now, there’s détente.

What did it take to bring this about?

At all the occupation sites I’ve been to, there have been discussions about how to treat police in such a way as to win them over to the movement’s side, to make them realize the movement is fighting for them. It’s always a contentious question: not only the matter of how, but of whether to even try. Sometime WNV contributor Jeremy Kessler has a thoughtful new essay at n + 1 about the occupiers and the police (admittedly, I’m quoted in it), and his answer makes a lot of sense:

In the end, police sympathy for the movement will only follow the broadening of the social and economic base of the Occupation, such that individual police personnel see their own concerns reflected in the Occupiers’ words and deeds. As with other aspects of the protesters’ strategy, means and ends remain essentially indistinguishable. In order to develop a strong relationship with police, the Occupation will have to develop strong relationships with lots of other people. There is something boring and obvious in this sociological calculus. But it is the only hope of the Occupation.

Being friendly to individual cops can’t hurt, for sure. But it’s not enough. To reach them, the movement has to win sympathy, or at least respect, across the society they belong to: that of their friends, families, and bosses. Even politicians. As I watched three green helicopters taking off from the White House lawn this afternoon—one of them surely Marine One—I couldn’t help but wonder whether someone from on high sees an opportunity for himself in the tent city now located a few blocks from his home, on federal property. If this is true, the newly permit-ed and permitted protesters are going to find themselves with a choice between domestication by the powerful and escalating their resistance.

Regardless, the fact that the occupations are turning from a nuisance into a fixture, at least for now, is an indication that they have succeeded in doing just what Kessler describes. They’ve won over unions, newspapers, politicians, celebrities, the old, the middle-aged, the young, and many more in between. These simultaneous decisions in New York and Washington will likely set the standard and the precedent for other places facing occupations this fall—and almost no place isn’t.

What also remains to seen is what happens when fall turns to winter. (Freedom Plaza’s permit lasts only through D.C.’s coldest months.) “I think part of it has probably to do with the weather,” Mayor Bloomberg said of the fate of the occupation.

Did someone say “foreclosures“?

UPDATE 10/11: The policy of leniency was not universal across the occupy movement overnight. As many as 100 occupiers were arrested in Boston early this morning for refusing to comply with orders to move their camp from the Rose Kennedy Greenway.