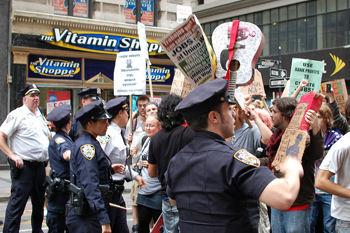 These last weeks, there have been two “occupations” in lower Manhattan, one of which has been getting almost all the coverage — that of the demonstrators camping out in Zuccotti Park.  The other, in the shadows, has been hardly less massive, sustained, or in its own way impressive — the police occupation of the Wall Street area.

On a recent visit to the park, I found the streets around the Stock Exchange barricaded and blocked off to traffic, and police everywhere in every form (in and out of uniform) — on foot, on scooters, on motorcycles, in squad cars with lights flashing, on horses, in paddy wagons or minivans, you name it.  At the park’s edge, there is a police observation tower capable of being raised and lowered hydraulically and literally hundreds of police are stationed in the vicinity.  I counted more than 50 of them on just one of its sides at a moment when next to nothing was going on — and many more can be seen almost anywhere in the Wall Street area, lolling in doorways, idling in the subway, ambling on the plazas of banks, and chatting in the middle of traffic-less streets.

This might be seen as massive overkill.  After all, the New York police have already shelled out an extra $1.9 million, largely in overtime pay at a budget-cutting moment in the city.  When, as on Thursday, 100 to 150 marchers suddenly headed out from Zuccotti Park to circle Chase Bank several blocks away, close to the same number of police — some with ominous clumps of flexi-cuffs dangling from their belts — calved off with them.  It’s as if the Occupy Wall Street movement has an eternal dark shadow that follows it everywhere.

At one level, this is all mystifying.  The daily crowds in the park remain remarkably, even startlingly, peaceable.  (Any violence has generally been the product of police action.)  On an everyday basis, a squad of 10 or 15 friendly police officers could easily handle the situation.  There is, of course, another possibility suggested to me by one of the policemen loitering at the Park’s edge doing nothing in particular: “Maybe they’re peaceable because we’re here.”  And here’s a second possibility: as my friend Steve Fraser, author of Wall Street: America’s Dream Palace, said to me, “This is the most important piece of real estate on the planet and they’re scared.  Look how amazed we are.  Imagine how they feel, especially after so many decades of seeing nothing like it.”

And then there’s a third possibility: that two quite separate universes are simply located in the vicinity of each other and of what, since September 12, 2001, we’ve been calling Ground Zero.  Think of it as Ground Zero Doubled, or think of it as the militarized recent American past and the unknown, potentially inspiring American future occupying something like the same space.  (You can, of course, come up with your own pairings, some far less optimistic.)  In their present state, New York’s finest represent a local version of the way this country has been militarized to its bones in these last years and, since 9/11, transformed into a full-scale surveillance-intelligence-homeland-security state.

Their stakeout in Zuccotti Park is geared to extreme acts, suicide bombers, and terrorism, as well as to a conception of protest and opposition as alien and enemy-like.  They are trying to herd, lock in, and possibly strangle a phenomenon that bears no relation to any of this.  They are, that is, policing the wrong thing, which is why every act of pepper spraying or swing of the truncheon, every aggressive act (as in the recent eviction threat to “clean” the park) blows back on them and only increases the size and coverage of the movement.

Though much of the time they are just a few feet apart, the armed state backing that famed 1%, or Wall Street, and the unarmed protesters claiming the other 99% might as well be in two different times in two different universes connected by a Star-Trekkian wormhole and meeting only where pepper spray hits eyes.

Which means anyone visiting the Occupy Wall Street site is also watching a strange dance of phantoms.  Still, we do know one thing.  This massive semi-militarized force we continue to call “the police” will, in the coming years, only grow more so. After all, they know but one way to operate.

This article first appeared on TomDispatch