While the slant of corporate media coverage of the Wall Street Occupation has focused on the general motivations behind the movement, often missed are the variety of personal perspectives, backgrounds and desires that brought this protest-city together. Here are some of the many voices that have combined their efforts to bring New York City the Wall Street live-in protest.
Julian 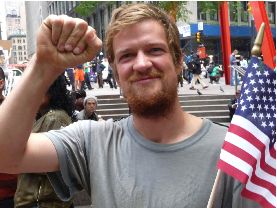 “I’m from Oregon. Saw it on the internet, decided to come out here and bought a one-way ticket. I’ve been here two days. In the past I’ve done some forest-related activism in Oregon, but I was so excited about this because it was out here, on Wall Street, to identify and call out the injustices. I love the consensus-based system for us to develop a vision of where we want to take society, for us to interact with each other and identify the problems. I see us as a part of the larger global movement. Capitalism is in crisis, both here and abroad.”

“I’ve been here four days and it’s getting increasingly organized each day. There’s a lot of quality people and diversity here. I think you’ll see a lot of people with diverse opinions, political orientations, dispositions, even apolitical. I think they achieve what they do not through unity, but through a similar shared process, the General Assembly, which is how most of the stuff around here is done. It’s a general, decentralized way to enact direct democracy. It’s about facilitation and the discussion of ideas.”

“So far I’ve spent one night here. I came here because I was laid off two weeks ago. I found out there was basically nothing better I could be doing with my time. I spent a lot of time looking for a new job, and there was nothing I could find. I only have an associate’s degree, which may not be much but I thought it would get me further than a mediocre minimum-wage job.” 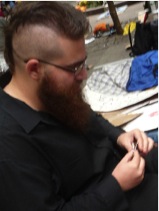 Bell
“I’m from south Germany. I was just passing through New York and I heard about the protest. The negative impact of this crazy system is an ever-growing problem — it’s not just the United States. We have these same problems in Germany. We have a single bank that has been propped up by $720 billion while we face cuts to our education system. The whole German education system — school, books, everything — could be entirely revamped with what we gave to just one bank.”

Tracy
“I tried to get a lot of friends to come out here, and I’m here alone. A lot of people don’t want to stand up for stuff they talk about all the time or address problems they see all

the time, so I wanted to be here. Despite everything it’s been a fun atmosphere, chilled, relaxed. But I also do really like marching around and going to Wall Street to tell them how much I don’t like them.”

Andrew
“After five days we finally started really getting organized. We haven’t really clarified a message, in my opinion — and I’m a mainstreamer, I prefer a foot in the 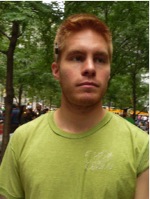 door to a door in the face — because a lot of people, even those who believe in non-dominance, have a tendency to believe that in a democracy the loudest voice is the best one to hear. I’ve encountered other loud voices besides mine and it’s been a challenge. To me the problem is that people think their possessions and clothing are their existence. Those people have the clout to stop buying those products and deny money to those companies. It’s all a work in progress, so I’m grateful for the purists who have checked me and challenged me, even from a devil’s advocate point of view.”