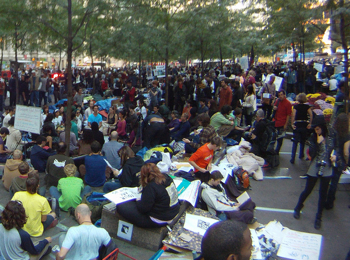 The Movement Is Growing

This time it was even harder to break away to write.

Liberty Plaza is teeming with people gathering for assemblies, talking politics, or meeting in work teams. Three hundred occupiers are listening intently to a lecture on participatory economics, while others are posing for pictures with the enormous golden made and donated by local interfaith leaders. There are people passing by on their way to work, travelers getting off tour buses to take pictures, students from local high schools being toured around. There are people from the Bronx and Bed-Stuy, Minneapolis and Madrid. There are drag queens networking with transit workers, Rabbis leading a thousand people through a Yom Kippur ceremony, and members of the People of Color Caucus planning to “Occupy the Hood.” People are doing yoga, teaching composting techniques, cleaning the square, and livestreaming the occupation to its million viewers worldwide. Some even manage to steal a few hours of sleep amidst all the commotion.

Last night, while on the phone with a journalist (who wouldn’t have returned our phone calls two weeks ago but is now begging us to say something, anything), I stumbled upon an impromptu demonstration at the famed Charging Bull. This was only blocks away from a pop-up Occupy Wall Street art exhibition, which happened to be across the street from a towering financial building newly donned with a banner reading – “Banks got bailed out, we got sold out.” Downtown Manhattan is an occupied zone, a bustling revolutionary city-center. People are taking the struggle on the road, expanding it, pushing it forward. We are making the movement part of our lives, and our lives part of the movement.

Over 100 cities in the US have active occupations right now, with more than 1,300 cities hosting formal meetings to plan for them. At the rate of change in this movement today, by the time this piece gets edited and published in a day, the numbers will be higher. Hundreds of cities around the country and the world will be carrying out actions in unison on October 15th. Unions and community organizations have joined the fight, and national organizations are trying to decide how to best join the movement without thwarting or co-opting it (which frankly, they couldn’t do, even if they tried). The pundits are conjecturing their heads off, while politicians of all stripes scuttle about, trying to figure out just how to try to use us. And yes, they are talking about us in Congress and in the White house, even sending their messengers to the occupation itself.

They would be fools not to. We are winning.

Every once in a while, in the course of some enormous struggle, those driven, tired, frazzled fighters have a moment or two to stop and think, to pick our heads up and look ahead. I had a moment like that a few days ago, and that’s when it hit me – like a blow to the head: We are winning. We are winning.

Sure, we haven’t captured government institutions, haven’t smashed the banks and the classes that control them, haven’t even won concrete reforms or come up with solid institutions to protect our gains. We aren’t even close to finishing the fight or creating the world we wish to live in. But – alongside revolutionaries around the world – we have helped to unlock the hidden and slumbering potential of millions of people, ready to believe again that there is an alternative. We have reignited hope in the possibility of a free society, punctured a small hole in the hegemony of cynicism, liberated some space in our hearts and our minds to gather the strength to fight and to dream. What was inconceivable just a month ago is now so very real.

And then the second part of the thought hit me: If we are winning, then what do we want?

What Do We Want?

The media and politicians call us muddle-headed, and confused. They claim we have no demands or purpose. Well, let’s set the record straight. It’s not that we don’t have demands; it’s that we speak them in a different language. We speak them with our struggle. Our movement is made up of people fighting for jobs, for schools, for debt relief, equitable housing, and healthcare. We are resisting ecological destruction, imperialism, racism, patriarchy, and capitalism. We are doing it all in a way that is participatory, democratic, fierce, and unwavering. There is nothing very vague about that.

But we do not stop there. That, perhaps, is what sets us apart from those who wish to use our tremendous and growing power for small gains or modest reforms. We want more. We want it all. We want a political and economic system that we all actually control together, one that is equitable and humane, one that allows for people to self-manage but act in solidarity, one that is participatory and democratic to its core. We want a world where people have the right to their own identities, communities, and cultures, and the freedom from oppression and constraint. We want a world with institutions that take care of our youth, our elderly, and our families in ways that are nurturing, liberating, and consensual. We want a world in which community is not a hamper on individual freedom, but rather an expression of its fullest potential.

If that’s not a clear enough statement of demands for you, CNN, I don’t know what to tell you. And you know what? We’re only getting warmed up.

As we keep fighting, we will continue to ask ourselves difficult questions. What world do we envision? What values do we want to live by? What institutions do we need in order to live those values? What structures will we build to protect what we’ve won and create a platform for continued struggle? What will we win for ourselves, and what will we win for generations to come? How will we fight these enormous battles in a way that is both effective and reflective of the new world we are ushering in?

October 15th and Beyond

Make no mistake about it, we are not aimless; we simply speak a different language – a language of mutual respect, participation, self-management, and action. We make our demands in this language that screams that we are here for the long-run, that our goal is not merely reform, that our vision is deep and radical, that we will not be bought off or co-opted, and that we are prepared to struggle in order to win not only those gains we can pronounce now but also those we can’t even fully articulate yet. We claim our space through actions that shout that we are here to stay, that this movement isn’t going home, that we are winning already, and that there is no turning back. We build this movement through the firm and fearless declaration that another world is possible, and that anything less is unacceptable.

You will see our demands plastered on subway walls, scrawled on hanging banners, tweeted across oceans, marched on the shoulders of hundreds of thousands, shouted in unison from millions of streets, windows, and computers screens. You will see them all over the world, from post-industrial cities to the country-sides, from capitals to shanty-towns. You will see them expressed in the streets of New York City on October 15th, when we bring the battle straight to the banks – those shiny little storefronts of finance capital. You will see our demands when we descend on the fluorescent decadence of Times Square and re-decorate it with our humanity.

Yes, we speak a different language, a fearless and visionary one. We are shouting, with every ounce of passion and strength we can muster: Of course there is an alternative. It is us.

Yotam Marom is an organizer, educator, musician, and writer. He is a member of the Organization for a Free Society, and can be reached at Yotam.marom@gmail.com.