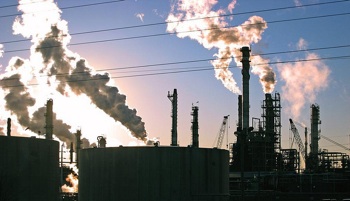 As evidence of a failed global economic system continues to emerge, fundamental questions arise about the impact of the capitalist system on the natural environment. Authors Fred Magdoff and John Bellamy Foster address the connection between the two in their new book, What Every Environmentalist Needs to Know about Capitalism.  From crop yields to weather patterns, our global economic system has dramatically altered the planet we inhabit. The book’s authors address those changes, as well as alternative economic models, at the Brecht Forum this Saturday, October 22 at 6 p.m.

Scott Borchert: What Every Environmentalist Needs to Know about Capitalism is a short, accessible introduction to the ecological crisis that is intended for a wide audience — why did you decide to write a book like this, and why now?

Fred Magdoff: In the fall of 2008 I attended a conference where discussion of the environment was prominent, although not the only subject.  As people talked about the variety of problems facing the earth and humanity I had the feeling that they were constantly “beating around the bush.”  So when it was my time to talk, I discarded my notes dealing with ecology and agriculture, and said that I thought a central issue was being ignored.  I explained that I was going to speak about “the bush” that I thought everyone was beating around — that is, the capitalist system and how in its very essence it is destructive of the environment.  This approach was a real stumbling block for most people there.  They were very interesting and innovative people — many would be considered “out of the box” thinkers.  But, I realized that they, and those in the environmental movement in general, were unable to think outside of capitalism.  It appears inconceivable to most of the people I spoke with that somehow there might be a future economic system that wasn’t capitalist.  It seemed to me that this was the critical issue.  I thought that, if they fully understood the role of the normal workings of the capitalist system in causing environmental havoc, people with such great concern for the environment might begin to understand that another social/economic/political system is not just possible, but essential.

SB: Most people will agree that we’re facing a number of environmental problems, from climate change to ocean acidification to species extinction, but how serious is the situation, really?

FM: The world’s environmental problems rise to the level of a major crisis.  This is certainly the most devastating crisis that has been faced by the world’s people.  There is so much damage being done to essentially all aspects of the environment that local, regional, and global ecosystems are being degraded.  We are already seeing severe effects of climate change, ocean acidification, chemical pollution, soil erosion, and so on.  Just to give a few examples: extreme weather events have occurred with greater frequency; yields of a number of crops have been decreased by high temperature, droughts, and floods; the drinking water for many people is contaminated with pesticides and high nitrate levels; people have had to move because of melting permafrost in the far north and the melting of glaciers that once provided reliable water in the dry season.  As the ocean level rises, low-lying coastal agricultural land is becoming contaminated with salt — this is already occurring in regions such as Vietnam’s Mekong Delta.  When all of the effects of environmental degradation are added together, the only conclusion one can come to is that the earth’s systems that support our existence as well as that of many other species are threatened.  Millions of people are already suffering various effects of environmental degradation.

SB: What are some of the proposed solutions to dealing with the ecological crisis, and why do you argue that they are insufficient?

FM: There is no shortage of ideas about what to do — live more simply, purchase “green” products, purchase carbon credits to offset the global warming effects of an airplane trip, blast the atmosphere with particles to reflect sunlight, develop systems for taking carbon dioxide out of the atmosphere and storing it deep underground, impose a tax on all fossil fuels (a carbon tax), etc.  Some of these make more sense than others.  Others have unknown consequences.  However, they all give the illusion that it is possible to solve the ecological crisis without confronting capitalism as a system.  And it is capitalism’s necessity to grow the economy forever and the single overriding goal of obtaining more and more profits that are at the heart of the environmental problems we face.

SB: Why should the environmental movement be concerned with economic issues at all?

FM: The big question — that environmentalists usually don’t ask — is why all of these assaults on the global ecosystem are happening.  They are usually concerned with one issue or another, global warming, chemical pollution, soil degradation, etc.  But why are they all occurring?  Without digging into how the economic system actually functions in the real world (not theoretically), it isn’t possible to answer the question. 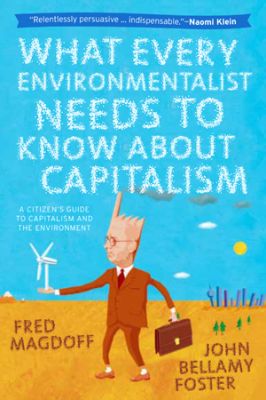 There are some environmentalists that are concerned with economic issues.  In fact, there are professors who consider themselves “ecological economists,” and there is even an institute of ecological economics.  But these people, some of whom are very creative thinkers, are concerned with putting a price on what they call “ecological services” — such as the role wetlands play in cleaning runoff water and providing habitat for wildlife — and suggesting ways that might make certain processes or products with less damage to the environment.  But they have no real critique of the system itself and there is no consideration given to alternative ways to organize and run an economy.

SB: What is the general attitude of the environmentalist movement toward your view, i.e. a systemic, anti-capitalist point of view?  Have attitudes been changing in recent years?

FM: Over the last decade there are increasing numbers of environmentalists who do understand that capitalism is the critical issue.  This is certainly a major step forward.  However, most of these people call for what is essentially tinkering with the system — better regulations, more government support for alternatives to fossil fuel energy, trying to factor in the costs of damage done to the environment into the prices of products — while keeping the essence of capitalism intact.

SB: Why not try to reform capitalism along “green” or “sustainable” lines, or aim for a “zero growth” economy?

FM: Truly “green” or “sustainable capitalism” is an oxymoron.  The very heart of the system — production of goods and services to make profits, which propels growth — excludes the possibility of capitalism being anything other than a system that has environmental destruction as a by-product.  Of course, it’s possible to have such things as better environmental regulations and use of fewer toxic chemicals.  We now have sewage treatment plants to treat the waste of cities and the rivers are therefore cleaner.  But the need to grow — to produce and sell more and more stuff while recognizing no boundaries — and having profits as the driving force and overwhelming goal of production means the system will always be environmentally destructive.

Zero growth is an economic disaster in a capitalist economy.  At this time (August 2011), the United States economy has been growing for more than two years since the official end of the Great Recession.  But it’s growing too slowly to provide enough jobs to re-employ the fired workers and get anywhere near full employment.  We have some 28 million people either unemployed (14 million), underemployed, or so discouraged that they have stopped looking for work (another 14 million between them).  Sustained high rates of economic growth are needed to get anywhere near what might be considered full employment.  The only way that zero economic growth can be consistent with satisfying people’s basic needs — physical and non-physical — is to have a different economic/social system in which production is done only for the purpose of providing these needs to the population instead of production for the purpose of selling stuff (regardless of its social value) and perpetually making profits.

SB: Who are the kinds of people you hope will read this book, and what effect do you hope it will have?

FM: Our hope is that this book will have an impact on people who already understand how serious the environmental problems are for humans as well as many other species.  These people don’t need to be convinced about the environmental disaster — although there is enough information in the book to bring a deeper understanding of the issues to all who read it — but rather need to grasp how what is happening is connected to the basic way our economic system functions.  It’s not an aberration — but rather a natural outcome.

SB: You’re also the co-author of The ABCS of the Economic Crisis (with Michael D. Yates), which is a short introduction to the causes of the 2008 financial crisis and ensuing recession — what is the relationship between that book and this new one?

FM: Both books are aimed at a general audience and written to be accessible to everyone interested in these subjects.  Both are also in the tradition of Monthly Review magazine as well as Monthly Review Press books — they try to get to the root of issues.  This means putting events into context to help people understand not only what problems or issues are occurring, but, more importantly, why they occurring and what might be done about them.

SB: How are movements and governments in other countries responding to the ecological crisis, compared to in the United States?  What can people in the U.S. and other core capitalist countries do?

FM: There is a huge amount of activity around the world over concern with, and how to improve, the environment.  One indication of this concern was the 2010 World Peoples’ Conference on Climate Change and the Rights of Mother Earth held in Bolivia.  Some 30,000 people attended representing many countries, organizations, and indigenous groups.  Many of those attending were from organizations engaged in actions around environmental justice and stopping the pillage of the earth as well as helping people cope with the consequences.  One of the people I met was from the Alaska tribal council and told of helping to move an entire native Alaska village because sea level increases and melting permafrost under their village made another location necessary.

There is much that can be done now, in the U.S. and other core capitalist countries.  For example, some groups are pushing for a carbon tax with money returned on an equal per capita basis.  This would slow down energy use without penalizing the poor who tend to use lower amounts of energy than the wealthy — they would receive more money than the extra they pay for the tax.  Just a few days ago people were arrested outside the White House while protesting the proposed building of a pipeline to carry oil from the tar sands of Alberta Canada to Texas.  Recovery of oil from the tar sands is an especially damaging process.  There is no lack of organizations that are doing meaningful things to help the environment.  What there is, however, is a lack of groups and a movement that understand that the environmental problems are deeply embedded in the economy and that a different way of interacting with the economy, other people, and the environment is necessary.

Fred Magdoff is co-author of the recently released What Every Environmentalist Needs to Know about Capitalism: A Citizen’s Guide to Capitalism and the Environment, with John Bellamy Foster.  He is professor emeritus of plant and soil science at the University of Vermont.  His other recent books include Agriculture and Food in Crisis(edited with Brian Tokar), The ABCs of the Economic Crisis (with Michael Yates), and The Great Financial Crisis(with John Bellamy Foster).  Scott Borchert works for Monthly Review Press.  He may be contacted at <scott@monthlyreview.org>.This article was originally published by Monthly Review.