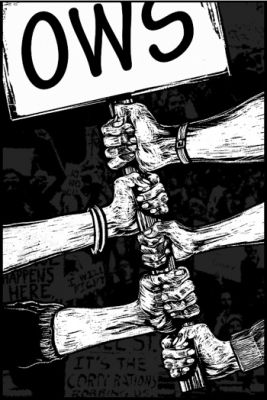 One of the most common criticisms of the movement sparked by Occupy Wall Street is that it lacks clear demands. This criticism, a staple of the mainstream media’s coverage of the movement, does more than simplify reality and demonstrate its detractors’ inability to recognize the new conception of politics which the movement is striving for. It also functions ideologically to diffuse the threat this movement poses to the powers-that-be by misrepresenting the latent radicalism of the movement as an incoherent and emotional jumble of discontents.

Consistent with its novel approach to politics, OWS does not approach the question of demands in the same way as social movements that see themselves as pressure groups within existing institutional politics. Although this difference is part of the movement’s message, it is simply not true that no demands can be gleaned from the movement’s deliberations.

For example, consider the “Declaration of the Occupation,” which, as reported in the first issue of The Occupied Wall Street Journal, was “approved by consensus on Sept. 29, 2011, at the New York City General Assembly in occupied Liberty Square.” This declaration may not offer the kind of laundry list of demands that might qualify OWS as a serious political actor in the eyes of the mainstream media, but it does offer a diagnosis of the serious and multifaceted crisis facing both this country and humanity as a whole.

This diagnosis is much more trenchant than anything to be found in the mainstream media, since it doesn’t mince words when it comes to identifying the root cause of much that ails humanity and the planet. This root cause is nothing but the subordination of humanity and the planet to the insatiable pursuit of corporate profit. It is a socio-economic system designed to promote the profit of the few at the expense of the many and the ecological integrity of the planet alike, which accounts for growing economic inequality, the eruption of the current economic crisis, the suffering this crisis inflicts on ordinary people around the world (via unemployment, foreclosures, cutbacks of social services), the corruption of our (not so) democratic political system and the obstacles this corruption places on the adoption of policies that could halt the deepening social, economic and ecological crises all around us. While this diagnosis may seem purely negative, a positive demand follows from it, namely the abolition of a world in which profits rule over people and the ecological integrity of the planet on which their survival depends.

It also follows, however, that this demand cannot be addressed to the economic and political elites whose survival and continued misrule it threatens. This is why the declaration ends not by pleading with the 1 percent to look kindly on the needs and suffering of the 99 percent but by inviting those from the 99 percent who have not joined the struggle to do so. In other words, the new politics that OWS represents does not seek to make our rulers more responsive to our needs, but rather to abolish the division of the population into a small directive elite empowered to make decisions on behalf of society as a whole and a majority of the population consigned to the secondary role of following orders and providing legitimacy for the system by periodically participating in elections that usually do more to preserve the democratic façade of our political system than to defend the will and needs of the vast majority against the narrow self-interest of the ruling minorities.

Alluding, moreover, to the inherently undemocratic nature of capitalist societies, the declaration makes it clear that “no true democracy is attainable when the process is determined by economic power.” This is a recognition of the need to fight for what I would call “economic democracy,” namely the right of all people to have an equal voice over the operation and priorities of the economic system under which they live. In OWS this is not just an abstract demand for the future but a principle guiding the day-to-day life of the movement. As has been the case in other occupied squares around the world, it is this principle that regulates the operation of the various committees (for food, media, medical services, etc.) that ensure the continued reproduction of the movement’s material and ideological conditions of existence.

At the same time, it is also true that the declaration’s call for a different, truly democratic, world will require much more than a proliferation of liberated islands like the one in Liberty Park. In addition to creating new alternative democratic spaces, which increasingly become an integral part of our society’s economic organization, we will also need to build broader movements and win demands that reduce inequality and democratize the state. There are examples we can follow, like the democratically run factories in Argentina or the practice of participatory budgeting around the world. The key is to initiate a virtuous circle whereby the successful pursuit of demands that reduce inequality and force the state to more accurately reflect the needs and priorities of the 99 percent will also facilitate the proliferation and even subsidization of democratic economic spaces, while the skills and self-confidence that ordinary people gain in economically democratic spaces will also empower them to articulate and win demands that keep reducing inequalities and democratizing the state. The spread of Occupy movements around the world is a promising development in this direction and it is for this reason that the mainstream media are so anxious to diminish and obscure their importance.

Costas Panayotakis teaches sociology at the New York City College of Technology. For more insight on the issues discussed in this article, refer to Panayotakis’ new book, Remaking Scarcity: From Capitalist Inefficiency to Economic Democracy.