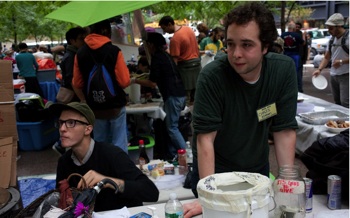 “Who is ready to defend our park?” the speaker shouted. It was 6 a.m. and thousands of us filled the Occupy Wall Street camp under a pre-dawn sky. The day before, Mayor Bloomberg threatened to evict us, so we came prepared to lock arms in a human chain. We knew cops could scald our eyes with pepper spray. But we were ready to defend a vision and raised our hands and yelled like a loud crack of thunder.

Bloomberg backed down and utopia, an ideal community or society, an imaginary island, a word that in Greek means “no-place,” continued to flourish just up the street from the New York Stock Exchange. Like a dream vanishing in morning, utopia cannot survive reality. And yet at Liberty Park a flawed but working utopia has appeared. In one square block the left has made a site of transformation that frees people from a commodified life to one of wild defiant joy.

No one is paid but we work. Few can buy food but no one goes hungry. We march with signs that shout for change but have created a miniature example of the world we want. In Liberty Park is a glimpse of life beyond capitalism.

Utopian sites like Liberty Park or Tahrir Square or the Paris Commune are geysers shooting desire into daylight. They transform our consciousness through solidarity. Occupy Wall Street provides the euphoria of fighting a common enemy — the 1 percent whose ill-gotten wealth and power we have come to reclaim. But at the core is an experience of democratic values. Until we speak of that vision we will target Wall Street and not see the new world rising from its ruins.

Chaos at the Center

“I feel like a weight has been lifted from me,” said Danny Valdes a 26-year-old English teacher. Around us tired marchers cuddled in a pile and people lined up for free food. “It wasn’t the ideology that brought me here but the openness. The left was separated like drops of wax and now this heat melts it together.”

We talk of how ideology divides the left but here empathy overflows ideas. Fighting over abstractions seems silly when sleeping on cold concrete. Out of need, we help each other and find meaning no book or leader can offer us.

In these new values a collective vision takes shape. In the donating of sleeping bags is the value of gifting. In the beautiful art, radical self-expression. In the weary nomads laden with backpacks we see radical inclusiveness, in the feeding and healing of each other, we see interdependence and in the general assemblies, direct democracy.

Weeks ago, I spent my first night at Liberty Park and watched protesters snoring in sleeping bags like large caterpillars. It was 3 a.m. A thin cold rain fell.
I met Tony, a young man from upstate New York. “I’ve looked for work for months but there’s nothing,” he said. “Not in the classifieds. Not through word of mouth.” Before coming, he left a note with his parents saying he was joining the occupation. “Mom said, ‘You’re doing the right thing.’ And she’s right. I don’t feel helpless anymore,” he said.

A few hours later, buses and taxis blared their horns in the morning rush. The 99’ers rose, shook puddles out of blue tarp. Their faces were strained from the cold and rain, hunger and fear. But whether it was greeting newcomers, sweeping trash into bags or scooping food on plates; I saw a sense of purpose that illuminated each gesture with glory. I felt that elusive utopia where the spirit moves through the dark corridors of history to a light that answers every question.

The other utopia I have experienced with the same energy as Occupy Wall Street is Burning Man. Each August, thousands of people gather in the Black Rock Desert of Nevada to haul tons of metal, tools, fabric and generators and build an ephemeral city. Rising from the bright white desert is the Man, a tall figure of wood and steel. For a week we circle him.

At Burning Man nearly everyone is joyful and open. And it heals. After interviewing refugees in Darfur or victims of flooded New Orleans or broken people in Haiti, it is a place where my soul unfolds into a new shape. You can dance or be spanked, fed, liquored up, massaged or loved and laugh hysterically. You can weep for the dead at the Temple. You can pour nightmares into the desert and walk away whole. Burning Man is a site of transformation with the same values of Occupy Wall Street; in it we experience radical self-expression, gifting, inclusiveness, immediacy, self-reliance, decommodification and civic responsibility. On the last day of the festival, the Man burns in a geyser of flame and crashes, we dance around his ashes to celebrate the sacred euphoria of our self-creation.

Every utopia has extreme behavior that is a symptom of its values. Horizontal groups bring in energy but suffer from “blurry lines.” Into Liberty Park have come homeless street youth, drug addicts and alcoholics.

During one sleepover, I saw a jittery circle at the far end of Liberty Plaza. I jogged over and heard an Occupy Wall Street security man yelling at a bleary-eyed vagabond to take his beer away before the cops came in. The next day a spiky-haired youth offered to sell me marijuana and later that night another Occupy Wall Street security man shouted at a thief who “borrowed and lost” an iPhone.

And there are creepers, men who take advantage of the open atmosphere to grope women. Ai Elo, a young activist said, “I was sexually assaulted at Liberty Park. I had to fight this guy’s hands off me the whole night. At first I thought I was alone but other women said the same thing.”

But when she gathered women together, one said, “Please don’t bring this up and divide the movement. I’ve waited 32 years for this to happen.” Elo shook her head, “What kind of movement is this if women have to sacrifice their safety?”

And of course, radical self-expression brings out the crazies. A tall, bearded man just loves to walk around with anti-Semitic signs. One time a group of us surrounded him and sang “Kum Ba Yah. We love Jews, oh Lord, we love Jews.” And then we hugged a gangly Jewish man with a big afro until he was dizzy with touch.

Thomas More was right to use Greek words “not” and “place” because utopia is “no place.” It is the repressed part of selves that has no place in society and yet, miraculously, it surfaces again and again.

Utopia is real because society is not. Under civilization is the building pressure of discontent and it steams through the cracks of crime and art and radical politics.
Burning Man and Occupy Wall Street are two utopias. The former, isolated in the desert, is reachable only by those with money. It changes lives but not society. The latter is sprouting in the heart of capitalism like a fountain of youth in a dead city, trying to transform the world with justice. Union supporters picket Sotheby’s art auction house on the Upper East Side to protest its attack on workers’ rights while others journey uptown to protest “stop-and-frisk” abuses outside a police station in Harlem. And at Liberty Park we camp on the doorstep of Capitalism.

On the surface, Occupy Wall Street is an oppositional utopia based on a common enemy. But at its core it shares with Burning Man the experience of creating a new world — which means as we march, we must see beyond Wall Street and point to the city flashing in the future and say its name before it vanishes.