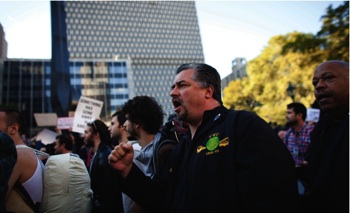 In unions all across the United States — with a few exceptions — radical members and staffers have been waiting for Godot, dreaming of a moment when their leadership takes the membership away from the next contract or organizing battle and to a broader agenda of economic justice. They wondered, for instance, when their presidents would start mobilizing to push Congress for universal health care rather than bargaining with employers for an attractive insurance package for their members, a strategy that might boost a union re-election campaign but won’t alter the lack of access to healthcare and the underlying structure of inequality.

The radicals from the Sixties, former college anti-sweatshop activists and self-educated rank-and-filers are a minority in a small club, as just less than 12 percent of the nation’s workforce is unionized. And as the U.S. labor movement’s influence has been waning since the 1970s, these radicals have gone to work each day, putting aside their hopes of mobilizing the working class in an anti-capitalist revolution, and focused on electing Democrats, easing laws concerning union elections and defending pensions.

But something has happened. With the Occupy Wall Street protests well into their second month and growing in numbers, unions, including the nation’s main labor federation, the AFL-CIO, have come out strongly in support. “It’s important to recognize that there’s a long stretch of the history of the mainstream labor movement where it would be hard to imagine them coming out in favor of an anti-capitalist direct action,” said Janice Fine, a professor at the School of Management and Labor Relations at Rutgers University at New Brunswick.

In a sense, the broadening of labor’s agenda has been going on for years as unions have fought to stay relevant in a post-industrial economy. The nation’s largest union, the Service Employees International Union (SEIU) has formed alliances with community groups to win organizing campaigns and attack the Republican economic agenda. Unions today often campaign by urging the public to support them during workplace conflicts because labor cutbacks would hurt the consumers, not because siding with labor over corporate greed is the moral thing to do.

The Occupy Wall Street movement represents something on a whole new level. Transport Workers Union (TWU) Local 100, a 37,000-member union with a radical history, has been at the forefront of labor support, going so far as to seek an injunction to stop the NYPD from forcing its members to transport arrested OWS protesters. Labor support is growing on the institutional level. 1199/SEIU sent members to provide medical assistance. Several big unions including the United Federation of Teachers and District Council 37 have lent nearby office space to OWS working groups. And email blasts from the AFL-CIO and unions urged members to join with the protesters in Liberty Park Oct. 14 to defend the OWS encampment from a possible eviction.

Jackie DiSalvo, a retired member of the Professional Staff Congress (CUNY professors union) and active member of the OWS labor outreach committee, noted that OWS participants have been constantly meeting with new union representatives to assist with other labor conflicts around the city, including organizing against Walmart. OWS protesters marched Oct. 21 with the Communications Workers of America, which is in a tough bargaining after a brief strike in August. “We’ve grown a lot,” DiSalvo said. “Even the more conservative unions are supporting Occupy Wall Street.”

The most high profile alliance has been the sustained OWS presence at Sotheby’s, protesting the auction house’s continued lockout of 43 Teamster art handlers despite posting the biggest profits in the company’s history. “This is a sophisticated group,” said Jason Ide, Teamster Local 814 president. “Nobody needed to tell them that this was the kind of fight they’re having. This is where the 1 percent shops. The people who own this place are part of the Wall Street economy.”

Occupy Wall Street protesters have an itch; they want this taken to the next level.

“We should have 100,000 people out here,” TWU Local 100 organizer J.P. Patafio said while joining the columns of protesters Oct. 14 to resist the eviction in Liberty Park. He noted that nearly 25 percent of New York City workers are unionized, “so we got work to do.”

There are opportunities. SEIU Local 32BJ represents 25,000 commercial building cleaners in the city, many of whom serve the FIRE sector (Finance, Insurance and Real Estate), and their contract expires at the end of December. While bargaining hasn’t started, the union is bracing itself for draconian giveback demands. “We are working, visiting buildings, talking to our members, and workers are preparing for a possible strike,” said SEIU Local 32BJ organizer Saul Nieves in Liberty Park.

No one should expect the union to prolong a strike just for the sake of OWS, but if this strike occurred, it would paint a perfect picture, and create a new local campaign, for the movement: Wall Street greed against “the help.” And next year, TWU Local 100 will probably have a bitter contract fight with the Metropolitan Transportation Authority, which is expected to demand both worker concessions and service cuts to fill its yawning budget gap.

This is where the natural link between this union and OWS becomes evident. TWU Local 100 President John Samuelsen didn’t run as a radical. In fact, he ran on a platform of fighting for a decent contract for transit workers. But what the left-wing faction of that union has said, and what Samuelsen has become more vocal about, is that finance and real estate interests have ruined the MTA (which operates as much as a private corporation as it does an arm of the state government), not worker pay or the costs of providing service. This has allowed the union to build new alliances with rider advocates and environmental groups, while using the contract battle to show how Wall Street bankrupts essential services will provide an opportunity for OWS to expand.

As Fine points out, beginning these relationships is the hard part. Unions have rigid leadership structures and bylaws and must comply with strict federal and local regulations, and the bigger ones work with high-priced lobbyists and media consultants. It is hard to fuse that with something as leaderless and nebulous as OWS, but there’s been marked progress, she said. And there is also a faction in any union that believes the business of the union is settling and administering contracts, and that any other endeavor is a just a waste of dues money.

In that regard, a better way to think about the role of unions in the Occupy Wall Street movement is to ask what OWS can offer the labor movement. Occupy Wall Street could inspire what remains of organized labor in this country to move away from just pushing  specific employers for modest wage gains and start organizing working-class people in order to shape not just industry standards, but a new economic order, as its frustrated radical factions have dreamt about.

“The labor movement has conditioned itself to only think of itself in legal terms. ‘What does the NLRB [National Labor Relations Board] say about this or that?’” Fine said. “It has to get beyond that.”

To borrow a phrase from free market fans, OWS is about “creative destruction.” Old models for resisting corporate power have failed, and OWS is forming a new one. Maybe it is time for labor to shed its old skin and remake itself. Some of that is happening at Liberty Park when union members join the emerging movement., said OWS activist Harrison Magee. “They sort of drop that identity,” he said. “They become Occupy Wall Street and they become something new.”