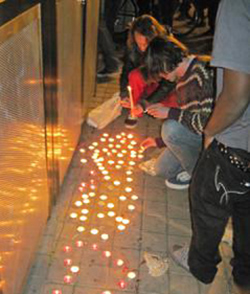 Oakland officials are threatening a new attack on the Occupy encampment at Oscar Grant Plaza outside City Hall–and they’re using the tragic shooting of a young man near the perimeter of the camp on November 10 as the excuse.

The same police force that nearly killed Iraq war veteran Scott Olsen in their assault on an October 25 demonstration delivered three city orders for protesters to leave the plaza over the weekend–but as this story was being written, the city had not yet made a move against the camp.

The media and representatives of business have kept up a steady drumbeat of complaints about alleged violence and crime taking place at Occupy Oakland–and demands that Mayor Jean Quan once again crack down. Quan and the city government were forced to retreat after the October 25 police attack spurred widespread outrage. Protesters reclaimed Oscar Grant Plaza the next day, and police didn’t attempt to block the general strike call for November 2 that produced a day of huge demonstrations.

But the complaints about Occupy reached a new pitch after the shooting on November 10, which apparently took place after a fight between several individuals. Protesters and Occupy Oakland medics were the first on the scene to give emergency care, but they were unable to save the young man.

Authorities have not arrested anyone or publicly identified any suspects. There is no evidence that the shooting was connected to the Occupy Oakland camp.

But that didn’t stop the city from exploiting this tragedy. Within hours, Quan had released a statement, saying:

Tragically, a young man was shot at 14th and Broadway tonight. But whether a murder occurs here or at 98th and International, I call on all Oaklanders to demand peace and reject violence anywhere…We heard that fights early in the day were broken up by people on Frank Ogawa Plaza. Tonight’s incident underscores the reason why the encampment must end.

Oakland City Council President Larry Reid went further. While being interviewed by reporters at the scene of the shooting, Reid insinuated that the actions of protesters made it difficult for paramedics to arrive at the scene.

This is simply not true. As Scott Johnson, a founder of the Occupied Oakland Tribune newspaper who was at the plaza when the shooting took place, wrote for the Occupy publication’s website:

[A]n Occupy Oakland medic jumped on top of the victim and began performing CPR, while others helped break up the circle [around the victim] to create room for the emergency workers who began to arrive. There must have been a moment of panic among others–as there was in myself–as the first responders arrived, but Occupiers were vigilant in making room for the paramedics, firefighters and, yes, even the police. The chaotic confrontation that could have erupted was avoided by cool heads and strong organization by many experienced activists.

Since the November 2 general strike and a failed building occupation that night which led to a confrontation between police and a small number of demonstrations, the Oakland City Council and Oakland Chamber of Commerce have been more vocal against the occupation.Health and safety concerns have been chief among their rhetoric, but another favorite theme is that the protests are costing the city money. Officials say Occupy Oakland-related events cost the city slightly more than $1 million through the end of October, mostly for police overtime.

Oakland’s business leaders have been critical of Quan for retreating and allowing the camp to reestablish itself. Some members of the city council are reportedly considering a “no confidence” vote. But Quan is far from being on the side of Occupy Oakland. The day before the shooting, Quan held a press conference where she claimed residents have “pretty much come on to the consensus that the camp must be moved at this point.”

So the procession of different city leaders holding press conferences about the shooting is clearly opportunistic. As Johnson wrote:

To be perfectly blunt, this was the 101st murder in Oakland this year. Where were all the helicopters for the other 100? Where was [Oakland’s interim Police Chief Howard] Jordan…for those photo-ops? The tragic death of a young African-American man is suddenly made “important” by the political crisis around Occupy Oakland…Like the Bush administration sharpening its knives after 9/11, salivating over the opportunity to reshape the Middle East, the Oakland political establishment sees their opportunity to win a few political points over a dead man’s barely cold body.

Despite the increasing pressure from city officials, Occupy Oakland activists are determined to maintain their encampment and build the movement. The announcement of the eviction order from the city did not intimidate those at the camp.

The November 10 shooting took place on the one-month anniversary of Occupy Oakland’s existence. Activists planned a vigil to bring together members of organized labor and the Occupy movement.

The tragedy produced a somber tone in the camp on what was supposed to be a night of celebration. But at the same time, hundreds still came out to participate. “Violence happens here all the time,” said Marwiyah Holland, who works at Tully’s Coffee, which is located a few feet from where the shooting occurred. “This had nothing to do with Occupy Oakland.”

Supporters of Occupy Oakland have been clear in the face of the media hysteria that violence is an ongoing problem in the city, and certainly nothing that started with the Occupy movement.Oakland has for years had one of the highest murder rates in the Bay Area, and it is often counted as one of the most dangerous cities in the country. But the solution from the city’s elite has been the same failing one for decades: more cops, more guns, more profiling.

These measures have been ineffective in stopping crime–but they are very effective in stoking racism. As Johnson wrote at the Occupied Oakland Tribune website:

Anybody who thinks that crime in downtown Oakland began with the occupation should say that statement out loud and hear how ridiculous it sounds. Ten years ago, I lived on 14th and Harrison, just three blocks away from the Plaza, which I walked past every day on my way to BART. Yes, Larry Reid, there was crime in downtown Oakland even then. I was personally mugged on the southwest corner of 14th and Broadway, and as far as I can remember, there were no tents on the lawn at the time.

This is part of what we are protesting. Occupy Oakland has always been about more than Wall Street and inequality. In many ways, it is an organic outgrowth of the struggle around the murder of Oscar Grant and the failure of the city to meet the social crisis faced by its population.

Billions of dollars flow through the Port of Oakland, while impoverished workers live just footsteps away. Many of them stood on their lawns as Occupy Oakland marched to shut down the Port during the General Strike. They are the people who have suffered the brunt of inequality, racism, police brutality and more. They are the people who can transform this city, and they are on our side.

If city officials would like to improve health and safety at Occupy Oakland, they should start by restoring the lights and water at Oscar Grant Plaza, which had been shut off several days before the shooting. And if Mayor Quan and the city council really wanted to stop violence in Oakland, they shouldn’t use $1 million to crack down on peaceful protests. They should use that money and much more to keep schools open–the city’s school board just voted to close five elementary schools–and fund desperately needed programs for the poor.

The challenges facing Oakland are deep and serious, but Quan and the city council aren’t responding with job programs or increased social services. That’s why Occupy Oakland’s survival is essential for putting forward effective alternative solutions, like taxing the rich to fund schools and libraries and to create jobs. Measures such as these will have a far greater effect in stopping violence than attacking Occupy Oakland once again.

The key to making a better Oakland is building the struggle.