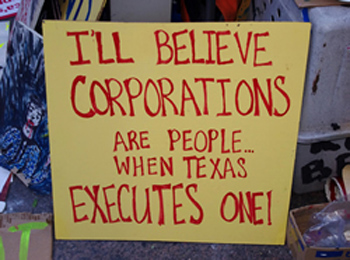 A funny thing happened to the First Amendment on its way to the public forum. According to the Supreme Court, money is now speech and corporations are now people. But when real people without money assemble to express their dissatisfaction with the political consequences of this, they’re treated as public nuisances and evicted.

First things first. The Supreme Court’s rulings that money is speech and corporations are people have now opened the floodgates to unlimited (and often secret) political contributions from millionaires and billionaires. Consider the Koch brothers (worth $25 billion each), who are bankrolling the Tea Party and already running millions of dollars worth of ads against Democrats.

Such millionaires and billionaires aren’t contributing their money out of sheer love of country. They have a more self-interested motive. Their political spending is analogous to their other investments. Mostly they want low tax rates and friendly regulations.

Wall Street is punishing Democrats for enacting the Dodd-Frank financial reform legislation (weak as it is) by shifting its money to Republicans. The Koch brothers’ petrochemical empire has financed, among many other things, candidates who will vote against environmental protection.

This tsunami of big money into politics is the real public nuisance. It’s making it almost impossible for the voices of average Americans to be heard because most of us don’t have the dough to break through. By granting First Amendment rights to money and corporations, the First Amendment rights of the rest of us are being trampled on.

This is where the Occupiers come in. If there’s a core message to the Occupier movement it’s that the increasing concentration of income and wealth poses a grave danger to our democracy.

Yet when Occupiers seek to make their voices heard — in one of the few ways average people can still be heard — they’re told their First Amendment rights are limited.

The New York State Court of Appeals along with many mayors and other officials say Occupiers can picket — but they can’t encamp. Yet it’s the encampments themselves that have drawn media attention (along with the police efforts to remove them).

A bunch of people carrying pickets isn’t news. When it comes to making views known, picketing is no competition for big money .

Yet if Occupiers now shift tactics from passive resistance to violence, it would spell the end of the movement. The vast American middle class that now empathizes with the Occupiers would promptly desert them.

But there’s another alternative. If Occupiers are expelled from specific geographic locations the Occupier movement can shift to broad-based organizing around the simple idea at the core of the movement: It’s time to occupy our democracy.