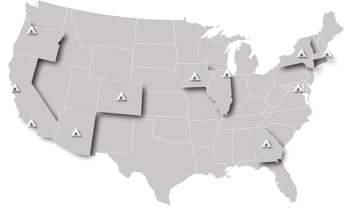 In New York City, participants in the burgeoning Occupy Wall Street movement have been confronted with a wide array of police reactions — from mass arrests currently numbering over 800 to Mayor Michael Bloomberg’s reluctant tolerance of the occupation. As The Indypendent goes to press, there are more than 400 occupations across the United States — from big urban centers to smaller cities and towns. Below is a sampling of police responses to these encampments.

Portland, ORE. – Since the occupation began Oct. 6, protesters have set up two camps near City Hall, with only one major standoff so far, when eight demonstrators were arrested Oct. 13 for blocking traffic. While the City Council has yet to take an official position on the occupations, City Commissioner Amanda Fritz told protesters Oct. 18 that “the City Council and I believe…that the U.S. Constitution’s rights of assembly and free speech trump the anti-camping ordinance.” Mayor Sam Adams, who is in charge of the Portland Police Bureau, has allowed the camp to remain despite city policies against camping on public property.

Oakland, CALIF. – On Oct. 25 police raided Frank Ogawa Plaza, leading to 85 arrests. Several hundred officers in riot gear swept through the park just before 5 a.m. Police dispersed the crowd with projectile tear gas canisters, including one that crashed into the skull of 24-year-old Iraq War veteran Scott Olsen, who was hospitalized with critical injuries that night and placed in a medically-induced coma. City officials cited health and sanitation concerns. Within 12 hours of the raid, 500 occupiers and supporters surrounded the park, challenging what they deemed the illegal eviction of a free speech protest. “In the end, I think we allowed people to exercise their rights to free speech and free assembly,” interim Police Chief Howard Jordan told reporters at a recent press conference.

Los Angeles, Calif. – With approximately 700 people camping out each night outside of City Hall, Occupy Los Angeles set up an additional encampment in nearby Fletcher Bowron Square on Oct. 19. Los Angeles Police Commander Blake Chow told the Los Angeles Times that protesters have been “cooperative” and “respectful.” So far there have been no arrests directly related to the occupations. The Los Angeles City Council even passed a resolution in support of the occupation on Oct. 12, which included a call for a “responsible banking” ordinance.

Phoenix, Ariz. – Forty-six protesters were arrested by Phoenix riot police after the first day of the occupation on Oct. 15. The incident occurred when demonstrators marched from Cesar Chavez Plaza to Margaret T. Hance Park and refused to leave after the park closed. As of Oct. 19, the city announced protesters would be permitted to spend the night at the plaza, and approximately 50 to 100 protesters gather daily at the encampment, with a contingent of around 20 staying overnight.

Denver, Colo. – Police clashed multiple times with protesters, and things came to a head the weekend of Oct. 14 when Denver police arrested a total of 50 people and dismantled the three-week-old encampment located at Lincoln Park. On Oct. 15 police used force and pepper spray in response to one protester’s attempt to re-establish the kitchen (known as the “Thunderdome”). The protesters have since relocated to Civic Center Park, with a core group of 80 protesters sleeping outside each night.

Des Moines, Iowa – After almost a week of camping outside of the State Capitol, protesters agreed to move to a nearby city park  Oct. 14. The relocation followed an Oct. 9 incident in which Iowa State Patrol officers arrested 29 demonstrators on charges of trespassing. Sally Frank, a lawyer who is assisting those who were arrested, told The Iowa Independent that officers showed a “level of brutality … I hadn’t seen in the over 20 years I’d been here.” According to Frank, police used pepper spray, cuffed the demonstrators too tightly and dragged them away. As a result, two dozen protesters are seeking a jury trial. A date has yet to be set.

Chicago – Protesters attempting to relocate their encampment near the Federal Reserve to Grant Park faced arrests on the evening of Oct. 23 for remaining in the park past 11 p.m., in violation of a city ordinance. The Chicago Police Department arrested 130 people. “Everybody was very peaceful and smiling and there was no violence, though a lot of chanting,” Occupy Chicago spokesperson Joshua Kaunert told National Public Radio.

Atlanta, GA – On Oct. 10, police told protesters to leave the park or face arrest. Many of the occupiers decided to stay, locking arms around the perimeter of Woodruff Park, a six-acre downtown greenspace that occupiers renamed “Troy Davis Park.” Later in the day, dozens of police in riot gear surrounded the park. Police and protesters were in a tense standoff for several hours until the police retreated, allowing the encampment to continue. On Oct. 25, Atlanta Police Department officers returned, arresting 53 protesters for violating city curfew laws.

Albany, N.Y. – On Oct. 21 Gov. Andrew Cuomo pressured city officials including Mayor Gerald Jennings into using law enforcement to disperse the crowd of more than 700 people that rallied around the 30 tents that formed the center of this upstate occupation. That night dozens of local police officers prepared to move in to arrest those who were camped past curfew on city property. With the approach of curfew, the occupation moved across an invisible line from state-owned land to city-owned land in the park. With protesters now outside of the state’s jurisdiction local police canceled the raid of the park, defying both Governor  Cuomo and Mayor Jennings.

Washington, D.C. – The nation’s capital boasts two occupations, one at McPherson Square, which began Oct. 1, and another that started at Freedom Plaza Oct. 6. As of late October, the National Park Service Police, which administers the two parks, was allowing the two encampments to continue, although they both violate regulations against camping and cooking. There have been no arrests at the occupations themselves, although a few dozen people have been arrested during protests at the Hart Senate Building, the Supreme Court, a House Armed Services Committee hearing and other sites of direct civil resistance actions.

Boston – This occupation, which began Sept. 27, faced mass arrests early on the morning of Oct. 11 after police issued an ultimatum demanding protesters vacate the newly renovated Rose Fitzgerald Kennedy Greenway and retreat to their original encampment in Dewey Square. More than 200 Boston and Transit Police officers arrested approximately 100 occupiers, including a group of veterans.