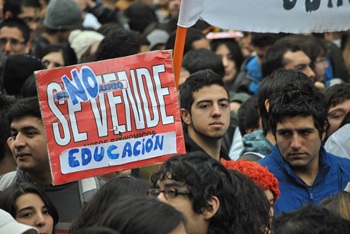 At dusk on August 15, high school students, university students, professors and supporters of the Chilean student movement flocked downtown to voice their demands for an equitable education system in an unauthorized demonstration. Along the way eager students were stalled as police blocked subway access throwing teargas and water canons aimed at groups of more than three people. Camila Vallejo, the President of the student federation, described downtown Santiago as a ‘stage of siege’, while others watching from afar condemned the explicit prevention of students from access to transportation. Grim memories of the ‘soft-dictatorship’ of the late 1980s where demonstrations required government approval gushed into the collective consciousness, raising questions about Chile’s democracy.

One month later, round table discussions between the student federation CONFECH (Confederation of Students from Chile) and the government dismantle and the Chilean education crisis deepens. The Chilean education system, faltering in many ways by OECD (The Organisation for Economic Co-operation and Development) standards, continues to be the biggest source of discomfort for President Sebastián Piñera. One of the main characteristics of the last five months of mass mobilizations and demands for educational restructuring is the government’s inability to address the problems at hand and its heavy handed response. The destruction of public property and violent outburst by hooded demonstrators dominates government attacks on student mobilizations, tagging the student movement as a jejune act of rebellion and occupied campuses as, in the words of deputy Gustavo Hasbún, ‘dens for delinquents’. The government’s refusal to accurately pinpoint student demands and negotiate on an even playing field rather than voicing harsher penalties is backfiring as government support plummets.

Various actions within right-wing conservatives have promulgated repressive tactics: Mayor of Santiago Zalaquett continually voiced the need to control havoc by releasing the Chilean military forces especially during the violent reminder of the 1973 coup on September 11th, Minister of Interior Rodrigo Hinzpeter headed a government project penalizing and prohibiting all covered demonstrators “with scarves or any other object covering faces” – evidently dismissing the smothering invasion of teargas causing all passersby to cover their faces. The latest government project seeks to sanction and incarcerate students who ‘occupy’ school buildings.

‘Tomas’, or ‘takes’, are historically a form of student protests and have played a significant role in obtaining tangible results in education reform – student outcries and occupations of the University of Chile in 1932 played a decisive role in toppling the military dictatorship of General Carlos Ibáñez del Campo, and the occupations of 2006 resulted in extensive reforms at the high school level. Symbolic in nature, occupations turn into encampments allowing students to plunder into all student activities, strategies and discussions. Yet, these occupations have interrupted classes for the last four months causing thousands of students to lose the school year and approximately 3.780 million pesos in damages.

Increasingly unpopular President Sebastián Piñera approved an initiative seeking to clamp down on ‘occupations’ by enacting harsher punishments toward those who destroy public property and take over educational institutions. On October 2, he further stated that violence is ‘a cancer’ and that “whoever attacks against public order, against the police force y police investigations, against the tranquility of citizens, public and private property, will find themselves facing a harsh and firm legislation, that will impose the proper punishments.”

The project characterizes ‘the occupation or invasion of buildings’ as a crime and establishes a jail sentence of up to three years for students who participate in the occupation of high schools or university campuses. Once approved, this law will enable the Chilean government to obtain footage from the media to identify hooded demonstrators, ‘encapuchados’, and students who confront Chilean authorities.

In an attempt to stall demonstrations and school occupations, the President faces criticism from the opposition government. Senator Jorge Pizarro saw this project as ‘absurd’ stating that rather than ‘using repression one should focus on the reasons generating the demonstrations’.

This project emerges amidst 70,000 students who have failed the entire school year due to occupations, authorities ousted many student occupations, increasing violent clashes during demonstrations, the recent rupture of round table discussions revealing deep discontent and class polarization and former Socialist President Michelle Bachelet breaking her silence in regards to the student movement stating that “Today Chile has a huge opportunity to better its educational system – an objective my government partially took on but did not fulfill.”

Students, anticipating harsher responses, stated that the proposed law incarcerating students who take part in occupations “is nothing more than a reflection of the authoritarian vision of this government” with President of the Student Federation of the Catholic University, Giorgio Jackson, restating that this measure “answers merely to the logic of looking at the symptoms and not analyzing the disease”.

Shalini Adnani is a freelance journalist and photographer based in Santiago, Chile.

This article was originally published by UpsideDownWorld.