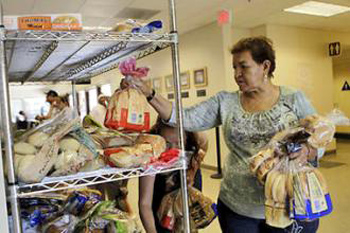 The Occupy Wall Street movement–the voice of the 99 percent–is striking a chord with anyone who sees the evidence of growing economic inequality in American society.

According to New York Times columnist David Brooks, the protesters are focusing on the “wrong” inequality. According to Brooks, the problem of the 1 percent vs. the 99 percent doesn’t really apply to the “red state” heartland of the U.S., where the real gap is between those with college educations and those without, he says. Pointing the finger at the very wealthy may apply to major “blue state” metropolitan areas, where the 1 percent lives, Brooks argues, but it has little to do with the inequality suffered in the rest of the country.

It’s a feeble attempt to divert the blame away from the uber-wealthy 1 percent–as if redistributing some of their wealth to the rest of population wouldn’t improve living standards everywhere. Brooks want to have us believe that the grievances of the 99 percent at Occupy Wall Street in New York City are somehow out of touch with people living in “Scranton, Des Moines, Naperville, Macon and Fresno.”

But the numbers show that the greatest economic gains over the last decade have gone not to the college-educated over those without college degrees, as Brooks claims, but to the 1 percent at the very top over everyone else. Citing a 2010 study from Center for American Progress, Dean Baker of the Center for Economic and Policy Research argues:

In the last decade, workers with only a college degree (i.e., no professional or advanced degree) did not share in the benefits of economic growth. The ratio of the wages of those with just college degrees to those without college degrees has not risen much since the early 1990s…[T]he vast majority of the economy’s gains have gone to the top 1 percent.

As if we needed more evidence of the expanding gap between the very rich and the rest of us, the Congressional Budget Office (CBO) just issued a striking report illustrating the huge increase in wealth for the richest over an almost three-decade period.

Basing its report on data from the Internal Revenue Service and the U.S. Census Bureau, the CBO looked at after-tax income–defined as household income after federal taxes have been deducted and government transfers such as Social Security and unemployment insurance have been added. Between 1979 and 2007, after-tax income grew by:

The fast growth in income for those at the top “was a major factor contributing to the growing dispersion of income,” the CBO concluded.

The report also uses another measure called “market income,” which calculates income before any transfer payments and before federal taxes are withheld. According to the CBO, the average real household market income for the highest income group tripled between 1979 and 2007, but households in the middle saw their market income increase by only 19 percent.

As a result, the share of total market income received by the top 1 percent more than doubled between 1979 and 2007, from about 10 percent to more than 20 percent.

“The budget office report tells us that essentially all of the upward redistribution of income away from the bottom 80 percent has gone to the highest-income 1 percent of Americans. That is, the protesters who portray themselves as representing the interests of the 99 percent have it basically right,” wrote Paul Krugman in the New York Times. He added:

If anything, the protesters are setting the cutoff too low. The recent budget office report doesn’t look inside the top 1 percent, but an earlier report, which only went up to 2005, found that almost two-thirds of the rising share of the top percentile in income actually went to the top 0.1 percent–the richest thousandth of Americans, who saw their real incomes rise more than 400 percent over the period from 1979 to 2005.

In addition to market income, according to the report, the growing income gap was also in part the result of shifts in the distribution of transfer payments and in federal taxes. For example, “[t]he equalizing effect of federal taxes was smaller” in 2007 than in 1979, the CBO said, as “the composition of federal revenues shifted away from progressive income taxes to less-progressive payroll taxes.”

In other words, the wealth at the top of society isn’t trickling its way down to the bottom. It’s long overdue for the government to use a more direct approach to evening out the vast inequality that exists in U.S. society–tax the rich.

But something else is clear. Over the last three decades, it isn’t just the case that a few people have become fabulously wealthy. The most important conclusion is that they’ve done it at the expense of everyone else.

As Washington Post columnist Eugene Robinson pointed out, “Three decades of trickle-down economic theory, see-no-evil deregulation and tax-cutting fervor have led to massive redistribution. Another word for what’s been happening might be theft.”

Despite what apologists for the status quo like Brooks have to say, astronomical income increases for the very wealthy while U.S. workers and the unemployed struggle to make ends meet is infuriating not just to New Yorkers but people all over the country. That’s why they’re protesting.