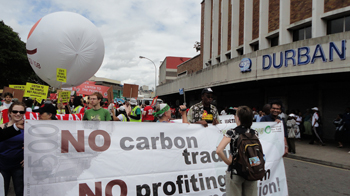 As the sun had risen in Durban, the Durban Platform was passed at the COP 17. Yet in a replay of Copenhagen two years ago, backroom texts emerged at the 11th hour and the process was thrown into disarray.South African Minister Maite Nkoana-Mashabane, President of the COP 17, sought to rally delegates to approve a draft text, as the talks continued into Sunday morning. The main document under negotiation was a roadmap proposed by the EU.

EU Roadmap and the Kyoto Protocol

So how does the roadmap proposed by Europe compare with the Kyoto Protocol? And how are various nations, nation groups, NGOs and civil society responding?

The UNFCCC negotiations seek to achieve three goals: 1. to establish greenhouse gas (ghg) emissions reductions commitments; 2. To secure funding and technology from developed countries for developing countries, to help them adapt to climate change; and 3. To decide on a method for monitoring, reporting and verifying (MRV) the agreed upon targets.

The Kyoto Protocol puts the burden on developed nations to make emissions reductions, since they bear the historical responsibility in creating existing emissions. It seeks to reduce emissions 20% to 30% by 2020 based on 1990 levels, in order to prevent temperature from increasing above 2 degrees Celsius (3.6 Fahrenheit). The scientific community widely agrees that temperature increases above 2 degrees Celsius would lead to irreversible effects of climate change.

Numerous nation groups, such as Least Developed Countries (LDCs, 48 countries), the Alliance of Small Island States (AOSIS, 43 nations) and the Africa Group (54 countries), have demanded that the limit be set at 1.5 degres Celsius, since temperature increases affect their countries disproportionately.

The first commitment period of the Kyoto Protocol, which 37 developed nations have signed, extends to 2012. The majority of the world, including nation groups such as the G77 + China (132 nations), LDCs, AOSIS and the European Union (EU, 27 nations), would like to renew the Kyoto Protocol beyond 2012.

The EU has proposed a “roadmap,” which Brazil and South Africa, as well as most African nations, the LDCs and AOSIS — about 120 nations altogether — support.

The roadmap would extend the commitments covered under the Kyoto Protocol beyond 2012. But it is unclear whether they would be extended to 2017 or 2020. (This decision will be made next year.)

It was negotiated and decided that the agreement must have “legal force.” It remains to be seen exactly what that means.

Up to 2020, nations would cut emissions based on their own national pledges, which are voluntary and not legally binding.

Here the problems begin. According to the United Nations Environment Programme (UNEP) Emissions Gap Report released last fall, year, the voluntary pledges made thus far by developed nations have led to an increase not a decrease in the levels of greenhouse gas emissions.

In a subsequent report released last month on November 23, 2011, UNEP outlined how to bridge the emissions gap in order to keep temperature increase to the two degree Celsius target.

Aside from the issue of voluntary emissions reductions not being enough, 2020 – as the year by which a new agreement would be reached – was lambasted.

Last month, the International Energy Agency (IEA) warned that if current emissions trends continue and are not reined by 2017, the planet will risk suffering irreversible climate change.

But there were clear behind the scenes instances of bullying manifesting themselves in stern words by both India’s and China’s lead climate negotiators at the closing informal plenary.

India’s lead climate negotiator Jayanthi Natarajan delivered scathing comments at the COP president’s closing informal stocktaking plenary. Without naming anyone, she stated “India will not be intimated by threats. There is an attempt to shift the blame to developing countries. We do not accept that. Please do not hold us hostage. And please do not take our agreement to be weakness.”

Xie Zhenhua, China’s lead climate negotiator, stated that the proposal was unacceptable, since it would “lead to the end of the Kyoto Protocol.” He, too, expressed outrage at the closing plenary.

China did indicate on Tuesday for the first time at UN negotiations that it was willing to commit to a legally binding agreement by 2020 at the latest.

What emerged starkly at this year’s COP, as in previous years, was US obstructionism.

What was new is that the mainstream media reported on it and to such an extent that US lead climate negotiator Todd Stern felt obliged to address it in a press conference.

Added pressure came from Abigail Borah, a 21-year old junior at Middlebury College, who on Thursday disrupted Mr. Stern’s statement to 194 nations at the UN summit.

Borah, who was attending the UN negotiations as part of the International Youth Climate Movement, stated “I am speaking on behalf of the United States of America because my negotiators cannot. The obstructionist Congress has shackled justice and delayed ambition far too long. I am scared for my future. 2020 is too late to wait.”

Addressing the accusations, Stern stated “I’ve heard this from everywhere from ministers to press reports to the very sincere and passionate young woman who was in the hall when I was giving my remarks.” Despite the plethora of statements accusing him of obstructionism, he denied the charges.

Yet the pressure seemed to have an effect. At a press conference on Thursday afternoon, Stern indicated his support for the EU roadmap, stating “If we get the kind of roadmap that countries have called for – the EU has called for, that the US supports – we are strongly committed … to move forward on that.”

In his closing remarks at the president’s plenary, Stern shied away from the words “legally binding,” “treaty” or agreement” and said instead that road map proposed by Europe had “the potential to become [pause] an historic document.”

Michael Dorsey, Professor of Environmental Sciences at Dartmouth College said, “The lack of a vision from the US is astounding.” “If anyone knows the science backwards and forwards,” Dorsey continued, “it’s [climate negotiator] Jonathan [Pershing]. So for him to push this out to 2015 is dangerous. And it’s dangerous to come out of the diplomacy department.”

“The UN stats are saying we’re going see 150 to 200 million climate refugees. When you have that kind of data up front, when you have fact after fact of data, when you know that reality of the science of what this is based on, that should cause alarm.“

“We have one of the most agile, nimble state departments. When you have the data and the resources and you do not use it, it’s dangerous.”

We’re on a Road to Nowhere: Response from NGOs

“Delaying real action until 2020 is a crime of global proportions,” said Nnimmo Bassey, Chair of Friends of the Earth International. “An increase in global temperatures of 4 degrees Celsius, permitted under this plan, is a death sentence for Africa, Small Island States, and the poor and vulnerable worldwide. This summit has amplified climate apartheid, whereby the richest 1% of the world have decided that it is acceptable to sacrifice the 99%.”

According to Pablo Solón, former lead climate negotiator for Bolivia, “It is false to say that a second commitment period of the Kyoto Protocol has been adopted in Durban. The actual decision has merely been postponed to the next COP, with no commitments for emission reductions from rich countries. This means that the Kyoto Protocol will be on life support until it is replaced by a new agreement that will be even weaker.”

“What some see as inaction is in fact a demonstration of the palpable failure of our current economic system to address economic, social or environmental crises,” said Janet Redman, of the Washington-based Institute for Policy Studies. “Banks that caused the financial crisis are now making bonanza profits speculating on our planet’s future. The financial sector, driven into a corner, is seeking a way out by developing ever newer commodities to prop up a failing system.”

At the closing sessions, Venezuela’s lead climate negotiator Claudia Salerno stood up as the chair proposed to forward the draft text for further discussion, and declared Venezuela’s opposition to the text.

She also stated that she had received two threats: (1) that if Venezuela blocks the draft text, a second commitment period would not be agreed to; and (2) that they would not receive funding.

In a repeat of last year’s COP 16, which closed in Cancún with Bolivia’s lead climate negotiator Solón explaining that Bolivia’s decision to oppose the Cancún Agreement and to stand alone was motivated by humanitarian grounds that exceed the narrow confines of the machinations of the UN negotiations.

Civil society, weary of the delays in these annual negotiations, are not standing down. Aside from the interruption of Stern’s address, on Wednesday six Canadians stood and turned their back on Canada’s Environment Minister Peter Kent, as he addressed the UNFCCC.

On Thursday, Anjali Appaduria, a college student at College of the Atlantic in Maine and a member of the Youth Delegation, delivered a succinct speech that summed up the science regarding global warming and the status of the UNFCCC negotiations.

Opening, she stated, “I speak for more than half the world’s population. We are the silent majority … You have given us a seat at the table. But our interests are not represented. What does it take to get a stake in this game? Lobbyists? Corporate influence? Money?”

“You have been negotiating all my life. In that time, you have failed to meet pledges, you have missed targets.”

“But you’ve heard this all before. We’re in Africa, home to communities at the frontlines of climate change. The world’s poorest countries need funding for adaptation. Now. The horn of Africa … needed it, yesterday. But as 2012 dawns our Green Climate Fund remains empty.”

“The International Energy Agency tells us we have five years until the window to avoid irreversible consequences of climate change closes. The science tells us that we have five years maximum. You are saying, give us ten. The most stark betrayal of your generation’s responsibility to ours is that you call this ambition.”

One of the most interesting assessments of what’s to be done was published by Jeff Goodell in Rolling Stone before the UN talks even began.

The next Conference of the Parties 18 is scheduled to take place in Qatar, from November 26 to December 7, 2012.

Tina Gerhardt is an independent journalist and academic, who covers international climate negotiations, domestic energy policy, and related direct actions. Her work has appeared in Alternet, Earth Island Journal, Grist, In These Times, The Nation and the Progressive.